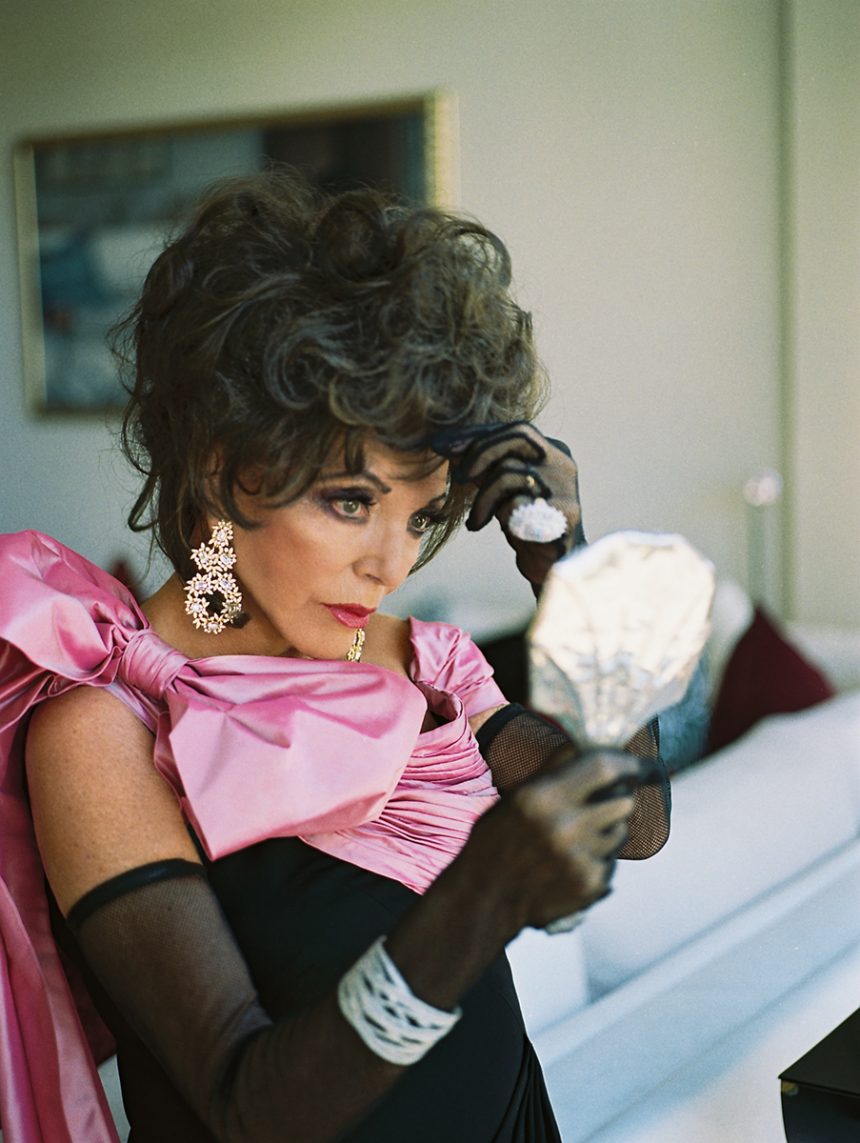 THE IMMORTAL JOAN COLLINS FINDS HER WAY IN A NEW AGE 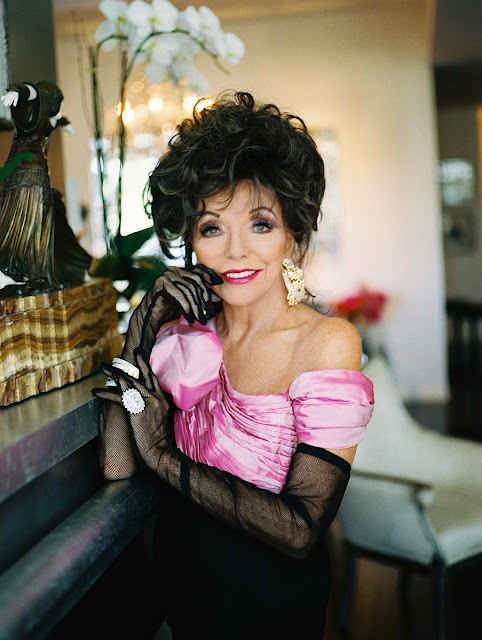 Describing Joan Collins is one of the few instances in Hollywood where using the word “immortal” is not a cliché. The self-proclaimed working actor has been in the game for nearly three-quarters of a century, and has resurfaced this year onAmerican Horror Story: Apocalypse as Evie Gallant, a wealthy nuclear war survivor who looks plucked from Collins’s days playing the soap opera villain Alexis Carrington on Dynasty. Collins has not been seen outdoors without a statement shoulder since the Reagan administration, but as she explains to the fashion designer and filmmaker Tom Ford, she is not one to follow the herd. The two dear friends got together to discuss everything but their respective stories about Gina Lollobrigida.

FORD: Your lines are perfectly delivered, and who knew how great you would look in black latex?

COLLINS: I have to say, when I looked through the crack in the door and saw that scene being performed, the look of shock on my face was not acting.

FORD: You have such a great sense of style, and you’ve become an icon. How did you find your style? How did you become “Joan Collins the public persona”?

COLLINS: Well, my mother had seven or eight sisters, and everybody was very concerned about how they looked—my mother always had daytime clothes as well as evening wear. At one point, I even wanted to be a designer, and I would design clothes for my aunts. We all had dressmakers at the time, because in the 1950s and ’60s the clothes in the shops were awful. Then, when Dynasty started, Nolan Miller said, “I think we’re going to put you in this little tweed suit with a pussycat bow.” I said, “No way! Do you know what Pierre Cardin and Yves Saint Laurent are doing in Paris right now? They’re doing nipped-in waists and big shoulders. They’re doing big hair, big earrings.” That’s what I wanted to do. So I talked to Aaron Spelling, and he said, “Well, that’s not how our leading ladies work in TV”—because he did Charlie’s Angels when they were all in little silk shirts and pants.

COLLINS: But he said, “I think it’s right for Alexis.” So Nolan and I had carte blanche. I loved the ’80s, and I still love the clothes. I won’t wear anything unless it’s got a full shoulder, or off-the-shoulder. I’m not the jeans-and-t-shirt type. Particularly torn jeans; I think that’s disgusting. Someone once said to me, “I bet you never wear track pants.” Well, of course, I do. There was a picture of me taken on set a couple of weeks ago with a white wig, an anorak, and track pants. I’m drinking a coffee. But I really like looking my best. I also went through a bohemian stage, wanting to look like Juliette Gréco.

FORD: It was a chic bohemian phase. I’ve seen those pictures. You know, I feel lucky to have been one of the last generations of children who were raised in a time when we had to put on a jacket and tie to take a plane. My mother wouldn’t answer the door without lipstick. So I admire you.

COLLINS: You know, if every actress in Hollywood wants to go around in torn jeans looking like they haven’t bothered—except that they’ve bothered a lot—then I don’t want to follow the herd.

FORD: You might not want to answer this, but what do you think of this new body type of having butt implants and these gigantic busts with tiny waists?

COLLINS: I find it bizarre, but every generation has its ideal woman, doesn’t it? Venus de Milo had a tummy.

FORD: Yes, but that was real. Now they have these implants. We’re maybe in a post-human phase where you can just create yourself to be whatever object you want to be.

COLLINS: I do wonder when I see those girls with cement put in their derrières what they are going to look like when they’re 60 or 70 years old.

COLLINS: It has to fall! 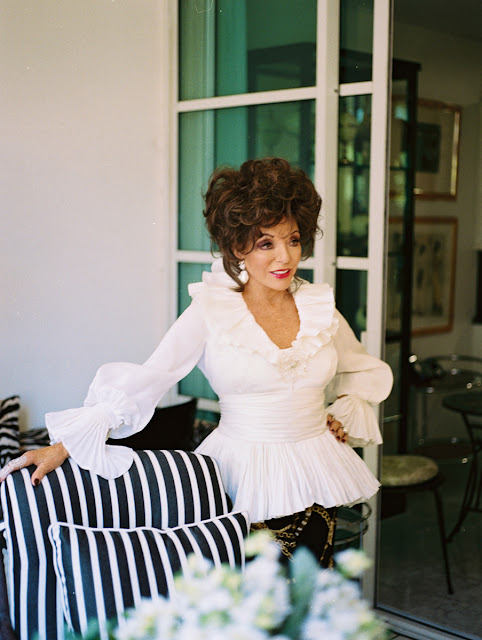 COLLINS: That’s very clever. I only post anodyne pictures. I refuse to post anything political. About two years ago I tweeted, “Mrs. May, our prime minister, made an inspiring speech last night.” I got such hate mail. That’s when I decided I would never say anything controversial again.

FORD: Another danger subject these days is #MeToo.

COLLINS: I don’t know if you have ever read any of my autobiographies, but there were a lot of #MeToo situations in there. At 18, I was drugged and raped by a man I went on to marry. I had never seen a man’s penis. I had only looked at a statue of Michelangelo’s and thought, “What’s that?”

FORD: It’s very small on Michelangelo’s statue. I never really quite got that.

COLLINS: The #MeToo movement is very empowering to Western women, but I wonder what is being done for women in other parts of the world.

TOM FORD:
WHAT’S THE SECRET TO A GREAT MARRIAGE?

FORD: Something I wanted to ask you, Joan—because I find you absolutely daring—is where does your fearlessness come from?

COLLINS: Maybe it comes from being a Blitz baby. I have vague recollections of Mummy and Daddy taking us down to the air-raid shelter at Edgware Road. My mother was terrified, because they’d see the bombs falling, but none of it really bothered me.

FORD: I admire that fearlessness in every way.

COLLINS: Well, when you get to a certain age, there’s really nothing to be scared of anymore. No one has ever said the word “fearless” to me before, but I suppose in a way I am. When they asked me to do American Horror Story, I thought it was marvelous. I didn’t know who I was going to play or what I was going to do, and I suppose few actors would go into a project without knowing who their character is.

FORD: I think of you as an incredible wit—the things that come out of your mouth at a dinner table are always incredible. Were you involved in writing some of your own lines in American Horror Story?

COLLINS: I did change one line, when I’m sitting at the table and say, “Well, when I was having dinner with Gina Lollobrigida…” It was not originally Gina Lollobrigida—it was another actress that people hadn’t really heard of who was not so relevant. I won’t say the other one’s name, but I just thought “Gina Lollobrigida” was so wonderful-sounding.

FORD: Next time we see each other privately, I’ll tell you a story about Gina Lollobrigida.

COLLINS: I’ll tell you one as well! By the way, did you watch The Assassination of Gianni Versace: American Crime Story?

FORD: Absolutely. And, of course, I knew Gianni. I was on the Concorde with him the day before that all happened. This might sound like a silly question, but is stardom different now than it was in another time?

COLLINS: It used to be totally different! I really became famous when I came to Fox. I was already famous in England, as a pinup girl and a glamour girl—I was always featured with a dress cut down to my navel. But when I came to Hollywood, they put the full publicity machine on me. They inundated the papers and magazines with pictures of me in bathing suits and sexy little outfits. I think I did become sort of famous then, but that fame deteriorated very fast. I never thought of myself as a star, nor did I ever want to be a star.

COLLINS: I consider myself a working actor.

FORD: It’s so interesting to hear you say that, because I think of you as a star.

COLLINS: I don’t go with the trappings of stardom. I do my own hair, my own makeup. I style myself. I don’t have any Tom Ford clothes right now.

FORD: Joan! That is easy to remedy!

COLLINS: Maybe one day I will.

FORD: You just have to come for a fitting.

COLLINS: I will, but I don’t like the connotations of stardom. I did a picture at Fox with Jayne Mansfield, and she was the true star. She was followed by hairdressers, her publicist, she had an entourage, and she loved it every time anybody came on the set and took a picture of her. She would just glow and stick out that chest and really go for it. I liked Jayne, she was fun. But I know from my father, who was an agent, that being a star doesn’t last. The only person who has really managed to do it is Streisand, I think. She’s the only person who’s been a star for, what, 50, 60 years? 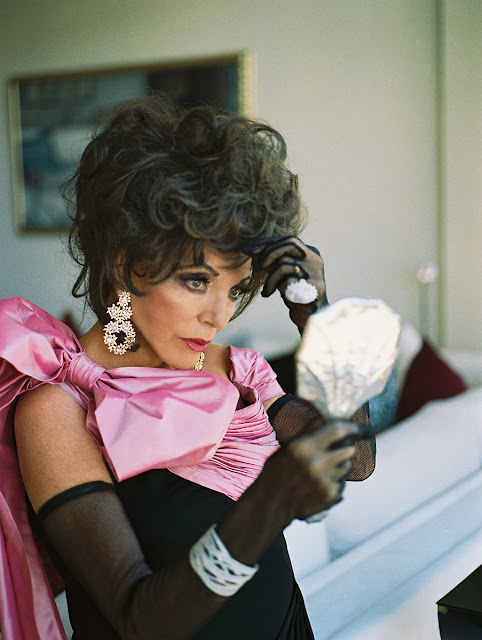 COLLINS: I don’t think she needs to.

FORD: You and Percy [Gibson] have been together for 16 years, and you seem to have a wonderful marriage. Every time we have dinner with you, I walk away thinking, “Wow, that’s a great couple.”

FORD: So what’s the secret to a great marriage?

FORD: If you can afford separate bathrooms, yes.

COLLINS: I think the actual secret is a certain amount of mystery. I don’t think one should know everything about the other. I met Percy in 2000. I liked him, and then like turned to love, and love turned to lust. But lust doesn’t last. As we all know, you wear yourself out.

FORD: I investigated that. It’s the same as skiing.

COLLINS: Well, I don’t like skiing. I’d rather sit in a nice fur hat, sipping a cappuccino or a martini.

FORD: Is there anything we don’t know about you that you think people should know?