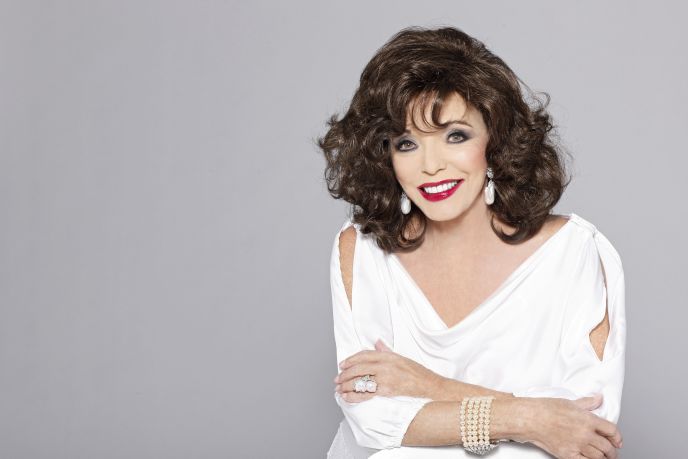 As she launches new products in her Timeless Beauty collection, Dame Joan Collins discusses her love of lipstick, holidaying with Cara Delevingne and her personal stock of caviar

It is Urban Retreat founder and beauty entrepreneur George Hammer who puts an encounter with Dame Joan Collins into words for me: “In our business you meet a lot of people and get involved with cosmetics and brands, but meeting Joan was the first time I ever met the real deal.”
Hammer and I speak at Claridge’s, where Collins is launching the next phase of their collective project, Joan Collins Timeless Beauty, a make-up range of rich colours, heavy duty textures and powerful scents. The room is full of her friends – clad in sunglasses and black suits – and a smattering of journalists who are quickly ushered in to admire the products lined up on tables around the edge of the suite, and quickly ushered out again. A few brave souls break ranks and ask for a ‘selfie’ with the lady herself, defying the rules that only the in-house photographer can take snaps. Everyone else looks on curiously.

Joan Collins has a strong presence, an old-school movie star glamour, created only in part by her convincing portrayal of a notorious alpha-female in 1980s television hit Dynasty. When we sit down, she tells me she is wearing a couture dress of her own design fastened with a huge plate of gold jewellery, vintage Chanel earrings and a Buccellati bracelet. Paired with long black satin gloves, kitten heels and a Chanel clutch, it’s a striking look for three o’clock in the afternoon and one that is positively marketable for Hammer and brand MD Mitchell Field, who in 2014 first offered the British actress the chance to turn her passion for beauty into a collection of lipsticks, foundations and perfumes.
Today, I am genuinely surprised by the fact that She looks much younger as she glides around the room, and insists:

“I am a perfectionist; I like everything to be perfect.”

The Joan Collins look takes time and money, of course: a member of her entourage spends 45 minutes giving me the defined eyes and berry-coloured lip she favours after the interview slot. But she knows that. “My approach to beauty is discipline; use absolutely every product you have for giving the best advantage – you’re not going to get good skin unless you use the right products,” Collins explains. “Always wear foundation, because it protects your skin and the elements are so destructive today.”

Typical of her demands of the make-up collection (Hammer jokes that Collins is more particular than the international brands he works with) the foundation in the Timeless Beauty range is entitled First Base and is formulated with hyaluronic acid to retain moisture and give the impression of plumper skin, an anti-ageing complex and UV filters.

In a show of approval, Collins wears a fuchsia lip colour from her own Divine Lips line; the shade is named Alexis after her Dynastycharacter. “This is one of my favourites, but when I’m feeling more dramatic I like Helene [red] a lot and Piper [a pale raspberry pink tone] when I’m just running around,” Collins says. “I never used to like lipstick as a teenager, then as I got older I liked it, and now I wouldn’t go out without it; I think it makes you feel very confident.”
Candidly, she admits she didn’t have very high self-esteem in the past. “Like all young girls, I didn’t think I was particularly good-looking and I didn’t have parents who told me I was pretty. My father was not one for compliments so I was not secure in myself at all. The first time someone told me I was ‘pretty’ was when I was five and the hairdresser told me I had beautiful eyes.”

Today, she shares both beauty and career advice with her god-daughter Cara Delevingne, who happens to be one of the most photographed models of the moment.

“I gave Cara advice a long time ago, when she was 16 or 17,” begins Collins. “We celebrated her birthday every year at a beach restaurant called Voile Rouge [in the French Riviera], and she was always in the sun; I would say ‘Cara, keep your face out of it’. Then she mentioned that she wanted to become an actress and I repeated the famous line from Jack Nicholson – ‘just what the world needs, another actress!’ I said; ‘the chance of making it are one in 10,000; you’ve really got to work at it, you’ve really got to study’. She did. She’s a very clever girl and she’s also a very talented musician and a great actress.”
Given that Delevingne’s image has been promoted in an era of social media, I ask if Collins thinks endless online photo streams are stripping the intrigue and mystery away from beauty.
“No, I think it’s fun,” she says. “We went out with my son Sacha and his girlfriend last night and we were taking ‘selfies’ of ourselves; I think it’s amazing what you can do. I mean I’ve just been working with Elizabeth Hurley, who takes selfies all the time.”
Perhaps alluding to mobile phone filters, she continues: “She has some kind of beauty thing on her phone… but I think it’s wonderful. Women can try different looks on, different hairstyles, different lipstick colours and check it out themselves. It’s magical. But don’t ever look at [the camera] if you don’t have make-up on,” she laughs.
It is when we are talking about how else Collins pampers herself that her husband Percy appears. Smartly dressed, he is protective over his wife throughout the afternoon, steering her neatly through the throng of well-wishers that line the corridors as she navigates from the private lounge for interviews and the welcome area.

“Her luxuries? Caviar!” he quips.

“That’s my little treat that I have once in a while,” Collins agrees. “I also like pillows and candles, although I don’t need aromatic candles as I have a fragrance diffuser.”

As part of a Body & Soul sub-collection, Collins has also overseen the creation of a home scent that mirrors the citrus, musk and woody base of her Eau de Parfum, named I Am Woman. It’s heady and reminds me of the powdery scent of vintage make-up. “I like being at home in the most luxurious surroundings I can,” Collins continues. “That means great lighting, candles, pillows – and yes, caviar.”
She tells me she’ll be spending Christmas in Los Angeles. “I think after I’m going away somewhere with Percy, and my sister’s three children, their husbands, and her six grandchildren.”
She also mentions spending time with her sister, the novelist Jackie, who sadly passed away just one week after this interview. There has been speculation that Collins discovered Jackie was suffering from cancer just days earlier. Having met her, the news only served to remind me how much of a professional Dame Joan Collins is.

A woman who can still dominate a room , work a crowd with more charisma that anyone five decades younger, and someone who embodies the expression ‘the show must go on’.

Having stayed for cocktails, I see Collins an hour after the launch, walking through the hotel. “Are you still here?” she asks. Still dressed head-to-toe in black, with a lipstick she was insistent was “berry not pink,” and her trademark full curls, she looked enviably glamorous and seizing the opportunity, I join the rule-breakers in asking for a photo, and she obliges.
Although Timeless Beauty MD Field says, “Joan is very soft really. She’s a great lady – and nothing like the soap opera character”, I’m not so sure that Collins is any less starry than you and I imagine. But she is indeed the real deal – the perfect beauty ambassador.