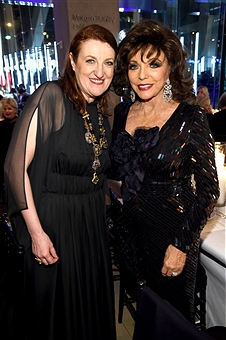 A storm of flawless fashionable folks, and Bruce Willis, all descended upon Lincoln Center’s Alice Tully Hall last night for an evening celebrating Valentino’s design duo, Maria Grazia Chiuri and Pierpaolo Piccioli, who received the Women’s Leadership Award in the third installment of the Lincoln Center Corporate Fund’s annual fashion gala. In true fashion form, the program began 30 minutes late, but the ensuing stream of heavyweights set to speak on stage was worth the wait.

An eclectic mix of brand fans lauded the two designers starting with Hearst President & CEO Steve Swartz and Harper’s Bazaar Editor-in-Chief, Glenda Bailey. “Every time I have lunch with them, we sit next to someone interesting,” Ms. Bailey recalled. “On one occasion we sat next to someone celebrating a birthday. They were given a Valentino bag. I am not making this up, and no, as I’ve told them on all of the occasions, I didn’t plan it. This happens because Valentino is the ultimate gift, and because Maria Grazia and Pierpaolo are ultimately gifted. In under 10 years, they have turned a storied brand into a fairytale. They love craft. They love romance. They love creating beauty, and for that, the world loves them. They invented the rock stud, but in fashion they are the rock stars.”

Diane Kruger then introduced a short film highlighting the Valentino couture workshop in Rome, where several dozen of the courtiers are in their 20s thanks to an apprentice program forged by the new designers. Valentino Garavani himself was not in attendance, though his long time husband and creative partner Giancarlo Giametti was on hand to offer some impromptu words. “What can I say? First, I give you the best from Valentino. He was not able to come tonight. What can I say about those two?” he said of the two honorees. “They are more than friends. They are like children. They have been with Valentino and me for over 10 years. What they accomplish, and what we do tonight, is still an honor to Valentino and to myself. They have brought our house to new success, and I cannot be more grateful and more in love with the two of you.”

Kiera Knightley was next to hand over the award to the two talented creative minds. “It gives me great joy to be here tonight to honor Maria Grazia Chiuri and Pierpaolo..Oh I don’t know how to say your surname. It’s so difficult! Piccioli? Is that it?’ Ms. Knightley said with laughs from the crowd. “They have combined the classic house’s wisdom, with the modern house’s optimism. The results are timeless, and I am proud to be wearing one and to share it, although please don’t take that literally because I am not sharing my dress with anyone thank you very much!” The 77-year-old Mr. Giametti seized the moment, taking out his iPhone to snap a photo of Ms. Knightley’s back ironically just as she began to highlight the modernity of the brand. “Of course they are fashion’s favorite word: Modern,” she said. “They’ve had Zoolander on their runways, and their inspirations on Instagram. Not to mention the rock stud, which has become the studliest of accessories.”

“I have to say I really wanted to introduce the next guest, but someone more good looking beat me to it,” Mr. Piccioli said following his brief acceptance speech for his Women’s Leadership Award alongside Ms. Chiuri. The unexpected introduction came from the often reclusive Bruce Willis who emerged from behind the stage to introduce Debbie Harry. “Rocker. Style icon. Feminist. Sex symbol. Actress. Cult star. Pioneer, and always ahead of her time,” he said quietly as his wife Emma looked on in the crowd. “Debbie Harry is famous for her music, art, fashion, and her performance is unmatched. As early as Blondie, Debbie Harry has been shattering barriers with her talent and artistry, and all of us are better for it including Maria Grazia and Pierpaolo who are her number one fans. On a night when we are celebrating the intersection of fashion and culture, it gives me great pleasure to introduce the legend herself.”

Following Ms. Harry’s four song performance, including her mega hit Heart of Glass alongside Blondie keyboardist Matt Katz-Bohen, the black tie crowd sat for dinner in the atrium where a one-night-only installation of Valentino’s Mirabilia Romae Fall 2015 Haute Couture collection lined the walls. After fielding compliments from supporters including Liv Tyler, Joan Collins, and Olivia Palermo, some of the last guests to leave were Ms. Chiuri and Mr. Piccioli who wafted out of Alice Tully Hall to rest for another night of New York festivities. Tonight they celebrate the release of their newest Assouline-published tome, Valentino: Mirabilia Romae, and their holiday pop-up partnership with Gwyneth Paltrow.