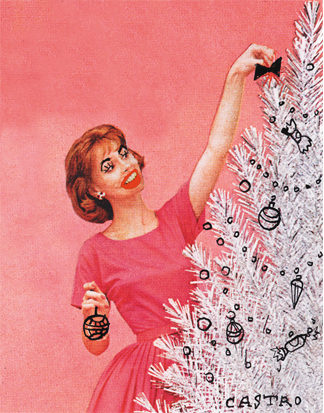 As I strolled through the aisles in a large department store, I almost choked when I read a large display that blared, “Don’t forget to treat your pussy at Christmas…”

With relief I read the rest of the ad – “…and your bow-wow too!” Beneath the dubious banner there lay a massive display of beautifully wrapped chew toys, scratching posts and all manner of treats and playthings for our feline and canine friends. That’s when I realized this entire Christmas practice has gone truly bonkers.

Every January 6th I breathe a sigh of relief as I take down and store the enormous amount of Christmas decorations with which I festoon my house during the festive season. “Never again!” I say to Percy, “Let’s go away next Christmas. I can’t do it again!” But when the following November rolls around all is forgotten and the boxes of goodies are brought out with much excitement and anticipation and I start to deck the halls all over again.

Christmas is a joyous time in our house and I never fail to revel in it. I’m not a religious person, nor am I an atheist (I’m more of an agnostic.) However I was raised with Christian values by a Church of England mother to the amusement of my Jewish father and my “hovering Buddhist” Uncle George – fresh from a Japanese concentration camp – and I was told that I could choose my own religious beliefs “when I grew up.”

But despite the multi-culturalism in my house, Christmas was joyously celebrated each year even during the declining days of World War II. We had a small tree, simple decorations and there would be one gift for each person and a stocking for Jackie, my cousins and me. This would contain a small puzzle, a tiny book or comic strip and a few sweets or an orange. There was no “bah-humbug” in our house. How things have changed!

The consumerism of Christmas has become absolutely insane, and the irony is that in so many parts of the UK and the US celebrating the birth of Christ is considered not only politically incorrect but also culturally and religiously intolerant. How terribly sad.

This anti-Christmas attitude is spreading. Recently a major cinema conglomerate decided to ban a one minute film sponsored by the CofE that represented people from all walks of life reciting lines of the Lord’s Prayer in an attempt to remind us all of the meaning of the upcoming Christmas season. Oh no, said the corporation, we risk offending sensitivities because after all we are completely secular. But that doesn’t stop them reaping the benefits of exhausted parents bundling their kids to the movies where they can gorge on violent, bloodthirsty undead creatures and gratuitous sex.

When I was appearing in a Christmas pantomime in Birmingham a few years ago I noticed there were no jolly Christmas lights or Santa’s in the street and hardly any nativity scenes or traditional decorations in the shops. When I asked a cab driver the reason, he shrugged and told me, “We can’t even call it Christmas – it’s Winterfest here – otherwise it offends them.”

That didn’t stop the council from endorsing the biggest Christmas – sorry, Winterfest – village in the style of a Bavarian town selling all kinds novelties, drink and food, the large proportion of the latter being beer, pretzels and smoked sausages tended by servers in Lederhosen. I felt I was in the middle of a Mel Brooks musical.

People rarely say “Merry Christmas” on their holiday cards and opt rather for the blander “Happy Holidays” or “Peace on Earth”. And some local districts even ban Christmas religious displays in public spaces and insist on generic decorations. There seems to be a general move towards downplaying the religious significance of Christmas and emphasizing the consumer side of it – as if we’ve decided Christmas is too valuable a commodity, so who cares why we celebrate it?

On Rodeo Drive, the prosperous major shopping street in Beverly Hills, the decorations consist of five or six massive boxes piled on top of each other and wrapped with red and green ribbon, block after block in the median section of the avenue.

At Hollywood, or “Hollyweird” as some call it, in early December I visited various restaurants and clubs. Practically everyone was really sloppily dressed, which appears to be the norm now. People going out in the evening wearing baggy cargo shorts, jeans with so many holes, rips and tears in them that they look as if they’ve just been pulled out of a garbage disposal bin.

These so-called designer jeans are sold for large sums in the trendy boutiques and stores everywhere. The “shabby tee-shirt” brigade look at you scornfully, as if you come from another century, which of course we do. But just after Thanksgiving, at the end of November, these many “trendsetters” top off their unstylish garb with ludicrous Santa Claus hats worn without aplomb. In doing so, they risk not only offending other people’s religious sensibility, but also their sense of fashion.

I love Christmas and I wish it could go back to the simplicity that defined it for me as a child. There was a magical aura about it’s spirituality and simplicity that we seem to have lost.

Donald Trump, the republican presidential aspirant and front-runner (yes, he is!), has been vociferous in his disdain for this new practice. He scorned Starbucks coffee for having the nerve to introduce as this year’s “Christmas cup” a plain red design devoid of any of the reindeers, snowflakes or holly boughs of yesteryear. Mr. Trump announced bravely that once he becomes President “We’re all going to be saying ‘Merry Christmas’ again.”

Well, bully for you, Mr. T. You are vocalizing what millions of people want and believe, and I bet you’ll know how to treat your pussy (or doggie) at Christmas!