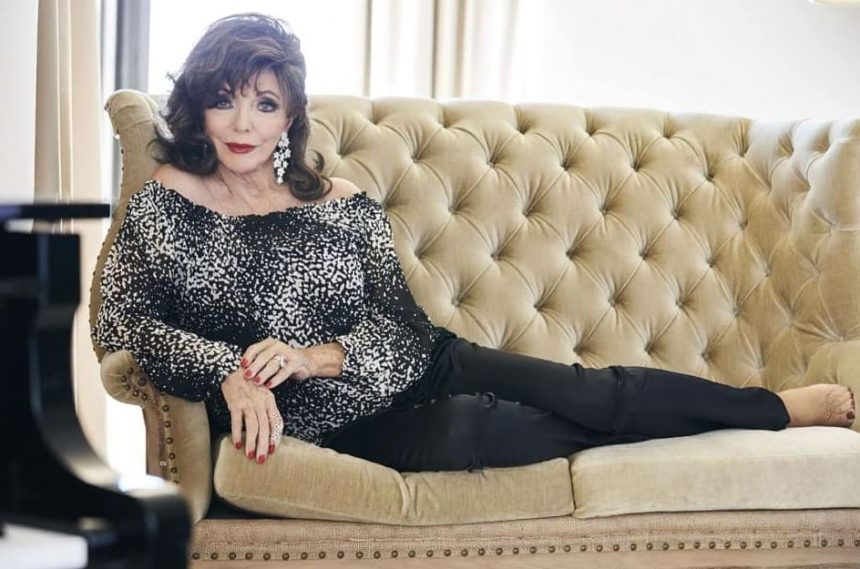 Joan Collins: ‘I’m absolutely a feminist but I’ll let somebody carry my bags’ by Michael Hogan..

The original vamp on 70 years of showbiz life, having Boris Johnson as a boss and why partying is a dying art..

Dame Joan Collins was born in Paddington and trained at Rada. She began appearing in films while still in her teens, with more than 70 credits including Our Girl Friday, Land of the Pharaohs, The Virgin Queen, The Stud and The Bitch. During the 80s, she found fame as Alexis Colby in the US soap Dynasty, a role that won her a Golden Globe. In recent years she returned to TV with the likes of The Royals, Benidorm and American Horror Story. Her new memoir, My Unapologetic Diaries, is out now.

Did returning to your 90s diaries whisk you back in time?
Absolutely. They weren’t written in the usual way. I never put pen to paper. Between 1989 and 2006, I talked into a Dictaphone practically every night when I got home, then put it away and forgot about it for years. When I mentioned these tapes to my agent, he thought it might make an interesting book. Because it was all spoken, people say it feels like they were there.

You begin the book by saying you’ve been called “Britain’s bad girl, England’s answer to Ava Gardner, a bitch, a pouting panther and a coffee-bar vixen”. Did you secretly like any of those descriptions?
[Laughs] Not really. I was a teenager appearing in British films when I was called most of them. Some were a bit upsetting, but you can’t let things get to you. To stay in this business, you have to develop a thick skin and strong character. I got my first reviews when I was 17. Some were very nasty and made me cry. A lot. But I got over it.

Roger Moore is a recurring presence in the diaries. Who would you like to see become the new James Bond?
Either James Norton or Tom Hardy would be good. I’ve known Roger since I was 15. We met at a theatrical agent’s office and have been friends ever since.

You once told John Major to wear smaller spectacles. Did he take your advice?
He did get better glasses eventually, so perhaps he listened. I liked him very much. I was with Shirley Bassey at an event at Downing Street and right off the cuff, he made one of the best speeches I’ve ever heard. Shirley and I were gobsmacked. We couldn’t work out why he was so disliked as prime minister.

You also say Boris Johnson “looks like he brushes his hair with an eggbeater”…
Well, he was my boss for a while. He was editor of the Spectator when I was a guest diarist.

You seemed terribly upset by the death of Diana, Princess of Wales. Why did it affect you so much?
I just thought she was an iconic figure and a very sweet woman whenever I met her. At one charity event, she was overawed by the paparazzi and screaming crowds, so she asked me how I stand all the attention. She seemed very vulnerable. I’d also been told 10 days before her death, when I was at this little restaurant in Saint-Tropez, that Diana had just been there with her boyfriend Dodi and her two boys. They were laughing and dancing around, like any young family. Hearing how happy she’d been made it all the more tragic.

You’re celebrating your 70th year in showbiz. What was the most enjoyable decade?
If I had to pick one, it would be the 60s. I had two young children and only worked when I wanted. I was under no pressure to be the breadwinner because I was married to Tony [her second husband, Anthony Newley]. We were living in Hollywood and had lots of great friends – the English contingent like Dudley Moore, Peter Sellers and Diana Dors. It was a fun time, free of stress. Probably the only decade that was.

Do you miss the golden age of Hollywood glamour?
What I miss is the glamour of parties. That culture doesn’t seem to exist any more. What they have now is the red carpet, which is all fake. Everybody gets dressed up in borrowed dresses and jewels, they pose for Instagram, then they go home. There’s not really a party scene. Or if there is, it’s very top-secret.

There’s lots of what you call “boozing and schmoozing” in the book. What’s your tipple nowadays?
I’ll have a glass of wine with dinner. Sometimes a martini, but I don’t drink excessively. Practically everyone I know doesn’t drink any more. It’s a dying art.

You’ve written 18 books now. What would your late novelist sister Jackie make of that?
She’d be very proud. She wrote 36, so I’ve got some catching up to do, but that was her main profession. Sony are supposedly doing a biopic about us called Joan & Jackie. I’m waiting eagerly for a meeting with the scriptwriter next week, actually.

You once called yourself a “born survivor”. Does that still apply?
I hope so. I don’t know if I was born that way, but I certainly became one. I’m lucky in that I’m very healthy – I’m touching wood as I say this – and have all my faculties, a great family and great friends.

What’s in the pipeline for you?
The BBC is making a documentary about my life, which is exciting. I’ve got a couple of other big projects coming up but it’s unlucky to talk about them. In the book, I mention how I was going to play Cruella de Vil, then I didn’t. That happens if you speak too soon. Now I never talk about anything until the clapperboard goes clap. Cruella and Cleopatra are the only two roles I regret missing out on.

You fought for pay parity with your male co-stars on Dynasty. Were you ahead of your time in that respect?
I’d been outspoken about equal pay since I was 20. I just don’t see why men should be paid more. If they’re a bigger star, maybe. If it’s Tom Cruise and Jane Whoever, then he should get more money. If it’s Meryl Streep and Sam Nothing, of course she should get more money. When that doesn’t apply, pay should be the same.

Would you describe yourself as a feminist?
Absolutely. I did long before that word was widely used. I’ve always believed in equality. Women can do whatever men do and they have the right to do so. The only possible area where women aren’t equal is physical strength. That’s why I’ll let somebody carry my bags. And, well, there’s a lot of bags.

The diaries become a charming love story towards the end when, at 66, you meet Percy Gibson, your fifth and current husband…
Thank you, that’s sweet of you to say. And best of all, the love story still continues.