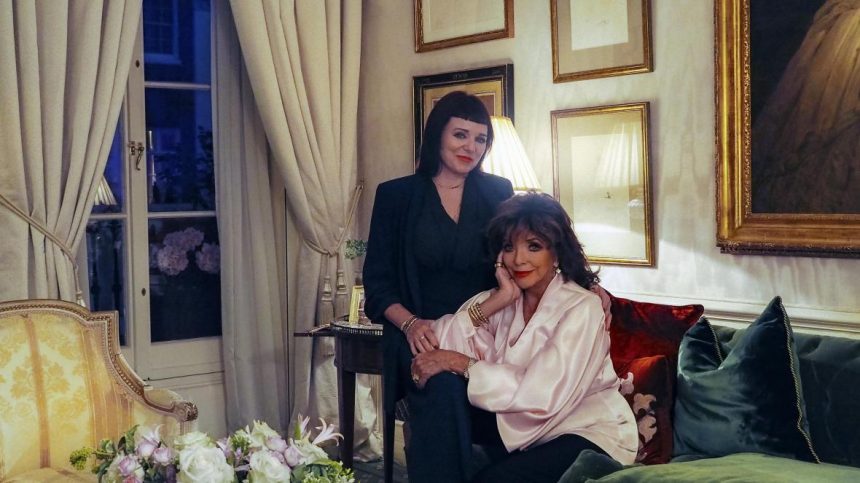 The actress and her novelist daughter on growing closer

Joan
I was already pregnant when I married Tony Newley. I was 29, I’d been an actress for ten years and I was getting a bit bored and broody. I wanted a little girl and I got my Tara Cynara — she was the centre of my world. Sacha came along when Tara was 13 months old, so I had two under two. I was a full-on, hands-on mother until they went to nursery. By then we were living in Beverly Hills and I started to get a lot of roles in television. That’s when I realised that I loved acting and I loved the business. I just wanted to get back to work.

I’ve never felt guilt and I’ve never felt jealousy. Those are two emotions I don’t really understand. I didn’t have anything to feel guilty about. I had a right to work, and after Tony and I divorced when Tara was seven, I needed to work. Anyone who knows me will tell you I was a good mother, but I worked a lot and I loved parties — we didn’t have social media, you went to be seen — that’s how I got the part of Alexis in Dynasty. And when things were really tough I stood in line for social security — it wasn’t my favourite experience and I never did it again.

I don’t know anyone with a female teenager who hasn’t had problems. It’s the nature of being a girl. Tara was rebellious and she had a very old-fashioned idea of how a woman should be. I’d be in the middle of a movie and she’d ask: “Who’s going to pick me up from school?” It took quite a long time for her to accept that a woman has a right to do exactly as a man does: work and put bread on the table.

When she was 13 or 14 she decided to go and live with her father, whose girlfriend cooked spaghetti and stews every night. It didn’t break my heart and it wasn’t a relief because of course it didn’t last; as soon as they got married they moved into the biggest house in Hollywood and the scales fell from Tara’s eyes.

It took a while for her to decide what she wanted to do. She went to the American College in Paris. She went to Boston University. She became a singer and she was very good. She’s worked in the film business and radio, she’s worked [as a case worker] for a women’s refuge and she’s written a wonderful novel.

I have experienced domestic abuse. I made it clear to even the worst of the husbands that if they raised a finger I would walk. I certainly have not approved of some of Tara’s ex-men. I did not like one former partner at all, he was not a nice man and the relationship ended horribly. Then she had a couple more relationships I didn’t approve of, just as she has not approved of some of mine. Tara is a girl who doesn’t hold back and she’s complained vociferously. There were a couple of men I was with in the late Eighties and Nineties she really didn’t like, and I can understand why because quite frankly they were terrible to her and to all my family. I was very stupid and it caused, not a rift exactly, but we weren’t as close as we should have been. So although we love each other to bits, it was sad we were both in these toxic relationships and couldn’t connect.

We both adore each other’s husbands now. I love Nick and she loves Percy. And we all love her children, Miel and Weston, to bits. She’s very much an earth mother, she’s really caring. Tara’s had to be strong because she’s had a tough life, but she’s not as strong as I am, and she gets very tired. It’s marvellous to see how happy she is now. I’m terribly proud of her. It’s not easy being Joan Collins’s daughter, I’m sure.

Tara
When I was growing up I had a fantasy in my head of what a family should look like. I hadn’t become the feminist I am today and I wanted my mum in an apron dishing out pancakes. My brother and I had a series of nannies as Mum slogged away at her career while going through relationships with men who didn’t support her. There were some very tough years and I was just disappointed she wasn’t with us more. I remember getting a Polaroid of her in a swamp fighting an enormous papier-mâché ant. She’d scribbled on it: “This is what your mum is doing to put food on the table.”

I was quite introspective and my parents’ divorce affected me deeply. When we moved from sunny California to London it felt like the expulsion from Eden. I was upset and confused, and that sense of loss coloured my childhood. Dad had let Mum down and she was looking for comfort and solidity by marrying again. I was angry with her and we didn’t connect in the way I hoped we would. She thought I was weighing her up against my dad’s new partner, who was a lot more mumsy. So we got in an argument and she said: “Go and live with your father then.” And I thought: “OK, I will.” But that too went south.

The repercussions played out for a few years, but everyone did the best they could and it worked out fine, because Mum and I are so close now it brings a tear to my eye. We can both be honest to the point of being blunt. That has sometimes made our relationship more complicated, but we totally understand each other.

One of the biggest changes in our relationship came when I stopped expecting her to be anything other than who she is. I feel it’s taken me most of my life to get my shit together. I’m so proud of her and the precedent she’s set for women everywhere to stand a bit taller because they can be more gorgeous and strong later in life than they ever thought possible.

It’s so easy to criticise women who’ve had to do everything. Even when she was married I think she felt like a single mother. My father definitely wasn’t the man she hoped he’d be; being faithful would have been a start. Having the amazing, supportive partners we have now has helped us to become a family. We are both late bloomers, we’ve fought through a ton of stuff to get to a better place.

She takes motherhood very seriously and it would hurt her deeply if she felt she’d messed up. She didn’t — she made me who I am today — a strong, independent woman. She’s an incredibly supportive, loving mother and friend. She might not always know the traditional things to say but when the chips are down, she’s there for you.

Sure, life has thrown her some mud pies and some terrible men, but she chooses not to think about things she can’t change. She’s always had more energy than me. She loves cocktails and dinner out every night. I can’t think of anything worse. I want to be tucked up on the sofa with my husband and Netflix. But if she hears I’ve been ill she’ll call me every day. When you get down to it, she’s not very different to most mums. She just happens to be Joan Collins, a total legend.