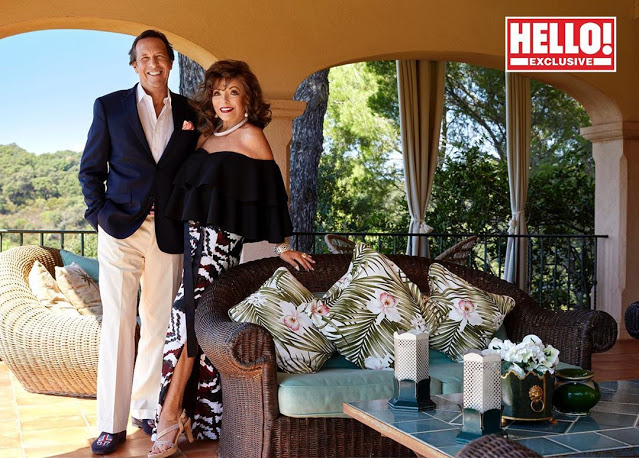 The couple spoke to HELLO! from their villa in St Tropez…

Dame Joan Collins and her husband Percy Gibson have spoken exclusively to HELLO! about being together 24/7 during lockdown – and how they couldn’t be happier in each other’s company. “We’ve become closer than ever,” says Joan, speaking from the couple’s spectacular villa in St Tropez, France.

“Being in lockdown has made me realise how strong our relationship really is. I love entertaining guests at the villa, travelling and socialising, but that changed and because of the restrictions it’s just Percy and me. The great thing is we’re partners in crime, accomplices.”

Percy nods in agreement. “Being together is the best thing,” he says. “I don’t think I could have survived the Covid situation with anyone except my wife.“

Joan also recalls how she and Percy were at their home in Los Angeles in January when she experienced a strange foreboding that they should return to London. “I had a feeling that something was going to happen, that a disease was on its way,” she says. “I started wearing gloves as protection and in restaurants I would wipe down the table and the cutlery. People would laugh at me, but I told Percy: ‘I think we should go back to England soon.'”

The couple returned to England at the beginning of March, two weeks before the government imposed an official lockdown. “At LA airport I wore a mask and gloves, and people were pointing and giggling,” recalls Joan. “I don’t think they believed the virus would spread.”

When travel restrictions finally lifted in June, they flew to their villa in the South of France where Percy has been treating his wife to home-cooked meals, including roast chicken and teriyaki salmon. With delicious dishes on the menu every day, the Golden Globe-winning actress admits that the extra calories coupled with her new languorous lifestyle have taken their toll.

“I’ve put on some Covid weight and am trying to get it off,” says Joan – although judging by her svelte, hourglass figure, those few extra pounds are invisible. “So I work out three times a week with my trainer on FaceTime.”

For the full interview and exclusive photos, pick up the new issue of HELLO! out on Monday.