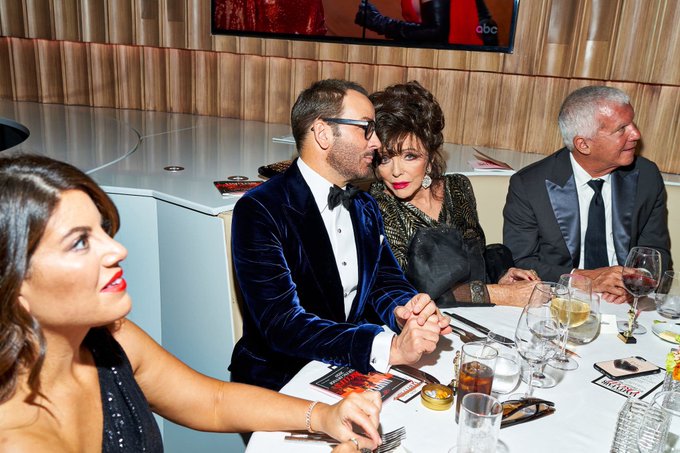 Recovering from a bad cold and bored to tears by the fare on television, Netflix, Amazon and Hulu (it’s shocking how much schlock there is with so many choices), I broke open a big box set of Dynasty and started binge watching. It occurred to me that I had actually never seen the series, except for a few snippets here and there, and I was curious to see the reason why the show’s ratings started to plummet after the fifth season. Was it the hideousness of the clothes? Mine weren’t so bad, sometimes, but the skirts and trousers were so baggy and shapeless that, coupled with the enormous shoulder pads, they made all of us look about four foot ten. They also watered the storyline down by bringing in a plethora of characters portrayed by big names such as Charlton Heston, Barbara Stanwyck, Ali MacGraw, Rock Hudson and my pal George Hamilton so that it would have been difficult for some viewers to figure out who was who. I was confused even though Alexis was related to most of them. A massacre occurred in fabled Moldavia (a country that disappeared in 1859), at which several of the characters were assassinated and then, with horror, I saw myself as Alexis disguised as a nun trying to break the King of Moldavia out of prison. Now I know why it tanked.

In the aftermath of Oscar week most denizens of Tinseltown have gone to ground or taken off in their private jets. There were at least 20 parties inside of the ten-day window, which most of the nominees attended and were, by all accounts, quite uneventful. I went to several, culminating in what I think was the most entertaining — the Vanity Fair viewing party at the Annenberg Center. I sat next to the fabulously entertaining Tom Ford, while Percy’s dinner companion was the ever-popular Monica Lewinsky, whose life story will shortly be made into a TV movie. The question of who will play President Clinton was the buzz of the party — what actor would dare?

As a Motion Picture Academy voter, I was mildly surprised that the Korean film Parasite was up for both Best International Feature Film and Best Picture, but then that had also happened the year before when Alfonso Cuarón’s Roma was in the running. When Parasite won in both categories, I was informed that my mouth actually fell open in astonishment (as I’m sure did everyone’s, including the producers, director and cast of Parasite). That a foreign film with subtitles — which, by the way, are very difficult to read — would trump (an incautious choice of verbs, I admit) the great oeuvres of Martin Scorsese, Quentin Tarantino and Sam Mendes was a tremendous shock. This may just put paid to any future complaints about diversity recognition by the voting committee, which has regularly been accused of being controlled by old white men. I thought that the Academy could not pit a foreign language film against a movie in English, but apparently I’m in the minority… as an older white woman.

It now seems that it is absolutely prohibited to say anything about anything that doesn’t conform with the proscribed mores of the politically correct majority. I had an argument with a young actor at another party after he claimed that, according to him (and casting agents, and directors, and producers, and just about everyone in the entertainment business), the word ‘actress’ is now verboten in Hollywood. After I expressed my views in my last article for this illustrious publication, I received quite a lot of flak about my supposedly outdated opinions. I actually managed to convince the actor that they are not outdated. Like everything nowadays, it should be a ‘choice’ given to a minority (of 50 per cent), and it’s time for me to reclaim my femininity. If you want to be called ‘female actor’, be my guest, but my choice is, and always will be, actress. Reading in the press that ‘actor Joan Collins arrived at the event wearing a full-length black and silver gown’ sounded ludicrous, and extremely confusing. The mob rule is in, however, and free speech worldwide (and America’s First Amendment) has gone out.

Much sadness in the Hills of Beverly at the passing of Kirk Douglas. I was lucky enough to work with him in a TV miniseries called The Moneychangers and he was everything a great movie star should be — charming, funny, professional and nice to everyone, unlike some of today’s entitled stars who consider themselves above mere mortals. Some even have contractual specifications that no ‘eye contact’ must be made with them.

By contrast, Kirk was like many huge stars I’ve worked with — great talents like Paul Newman, Robert Mitchum and Gregory Peck — fun and down to earth, always grateful and never dismissive of the success that their talent had garnered. Kirk and I were on a boat in Cannes during the film festival, promoting The Moneychangers, when a small plane carrying a banner for my next movie passed overhead, proclaiming to one and all ‘Joan Collins IS The Bitch’. I was mortified. I turned to Kirk and said, ‘Oh that’s awful! They told me it would say “Joan Collins AS The Bitch”.’ ‘Aw, honey, it’s great publicity. Embrace it!’ He grinned, ‘It’s a compliment.’ A few years later, enter Alexis in Dynasty, and embrace it I did.