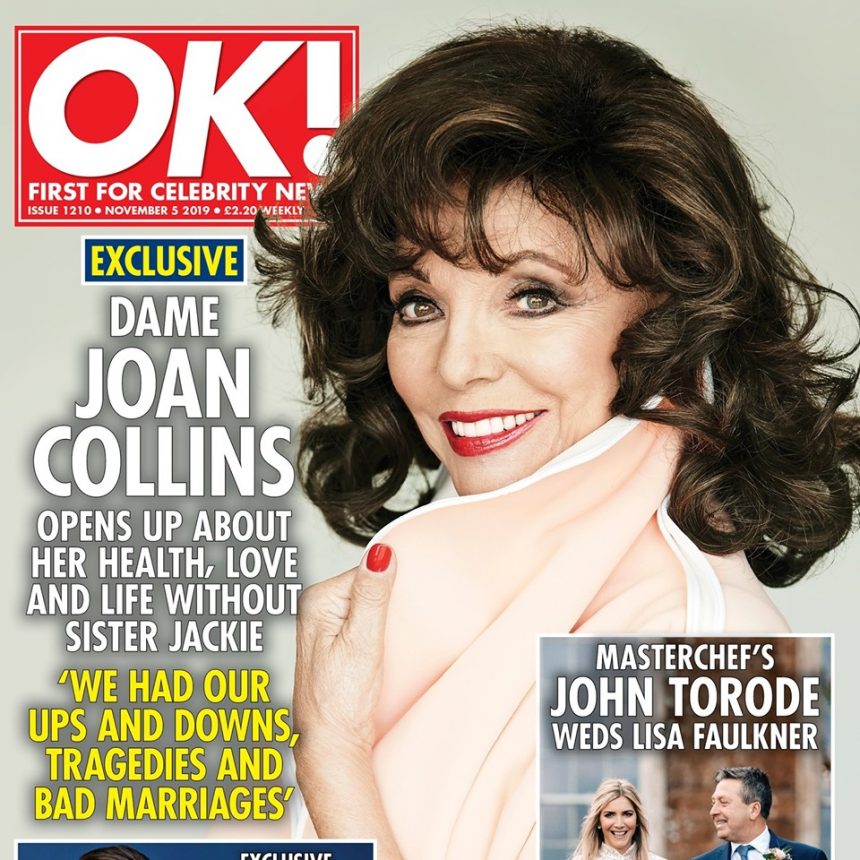 OK! ENJOYS AN EVENING DAME JOAN COLLINS
DAME JOAN COLLINS OPENS UP TO OK!’S ROWAN ERLAM ABOUT THE HIGHS AND LOWS OF HER LIFE AND SHARES HER SECRET TO A HAPPY MARRIAGE
OK! (UK)29 Oct 2019

National treasure Dame Joan Collins has exclusively opened up to OK! about her roller-coaster life in the spotlight, admitting it hasn’t always been a riot of champagne and shoulder pads. The 86-year-old star was speaking at a glittering reception hosted by Penny Brohn UK, a charity which supports people with cancer.

Revealing all about the highly anticipated television series which will follow the life of her and her late sister, best-selling author Jackie, Dame Joan told us: ‘There are going to be so many big moments to cover as Jackie and I have both had very interesting lives.’

The actress, who has famously been married five times, added: ‘We’ve had our ups and downs, we’ve had our tragedies and our bad marriages. I’m a producer on the show. I’m not going to say who I would like to play me. However, there is someone who we are talking about using, but I can’t say who it is yet. It’s top secret! The show is going to be set from the early ‘50s when we were teenagers to the early ‘80s, when I was on the number one television show in America and she had the number one selling book. It’ll cover 30 years of our lives.’

The Penny Brohn UK event, hosted by Sir Jack and Lady Petchey, Frances Segelman, in their London home and exclusively covered by OK!, was to celebrate the unveiling of a bronze of Dame Joan, sculpted by Frances, an esteemed royal sculptor.

The charity is close to the former Dynasty actress’s heart as it supported Jackie after her breast cancer diagnosis in 2009. Jackie, who chose to

keep her illness a secret from her fans and family, passed away in 2015, two weeks before her 78th birthday.

Movingly, Dame Joan explained: ‘As you know, my sister died of br east cancer, which is sadly something that so many people are going to get. Our mother also died of that as well. My sister was very brave and didn’t tell anyone until the end. She was supported by Penny Brohn and that was who she wanted to leave a lot of her things to, and the charity she thought was the best, because it really takes care of people when they get cancer and they don’t have anyone to really talk to. They can meet people in the same boat, as it were.’

When we asked if she too was fearful of a cancer diagnosis, she said: ‘It’s terrifying how many people are affected by cancer, but it’s very important to get checked and I do get checked regularly and I eat very healthily and have a good lifestyle. I don’t smoke, but I do have the occasional wine, which I think is okay! But you never know – my mother didn’t smoke and she got cancer at 52, and my father did smoke and he lived to be 87. Let’s hope I’ve inherited my father’s genes!’

Despite being in her eighties, Dame Joan is still a regular on the party scene with her husband of 17 years, Percy Gibson. Her secret? Living life to the full! ‘My tip would be: don’t go anywhere unless you feel like you’re going to enjoy it. And if you are going to go, then just make the absolute best effort that you can. A lot of the time people have to go to weddings and events that they don’t want to go to, but you have to take the bull by the horns and go,

‘She’s just got the most fabulous Sense of humour’

find the best person to speak to and enjoy the canapés, wine and atmosphere.’

It’s another British icon with a penchant for diamonds who inspires the star – her majesty! ‘The Queen is the greatest example of a person and a ruler that exists. It’s the hardest thing to do what she does – smile, be interested and stand still, and she’s carried that on for 65 years.’

Earlier in the evening, Dame Joan – who was OK!’S first ever cover star – was introduced by This Morning presenter Eamonn Holmes.

Before unveiling Frances’s stunning bronze statue, which Joan had sat for 18 months ago, Eamonn said: ‘Frances, you had the responsibility of recreating Dame Joan. And Dame Joan, my admiration for you – you know it’s genuine and you know it’s sincere. Lots of people can be famous and lots of people can be on the cover of magazines, but not many people can have a career at the top, doing the things that she has done for the amount of time she has.

‘Sometimes it’s not about getting there, it’s about staying there. And you have stayed there at multiple levels. You have a star on the Hollywood Walk of Fame. When you started out in Hollywood, making films, how old were you?’ To which Dame Joan responded: ‘I started in films in England when I was 17. I did about seven or eight films in England and then I was sold to 20th Century Fox in America when I was 20.’

She quipped: ‘I went to America, which was very difficult to get to in the 18th Century!’

She went on to share how she’d worked with some of the biggest legends in Hollywood, telling us: ‘The first person I met in Hollywood was Gene Kelly – he was a fabulous man – and the second person I met was Bette Davis. She smoked all the time. But I smoked then, we all smoked! We didn’t know the dangers of smoking. If there are any pictures of me from that time then I always had a packet of Lucky Strike down my cleavage! I also worked with Gregory Peck, Paul Newman, Bing Crosby… It was a great time in Hollywood.’

Dame Joan said she was ‘delighted’ with her sculpture, adding: ‘I love what you’ve done with the hair and the diamond earrings! And I think the face looks very much like me. I love the eyes – they’re amazing.’

Her loyal husband Percy was, of course, there to support his wife on the night. She once famously joked of her younger man: ‘If he dies, he dies!’ But, thankfully, Percy, 54, was on sparkling form. When we asked what he cherishes about his wife, he told us: ‘She’s just got the most fabulous sense of humour. Our motto is: “Eat up life or life will eat you up.”’

At the end of the evening, Eamonn shared his fond memories of the actress’s beloved sibling, telling her: ‘I’d just like to say of your sister, Jackie, she was the most accessible and friendly person and my last memory of her was in the airport lounge at Heathrow. She was flying to Belfast for a talk show and I was flying to Belfast too and we had, what we would say back at home, a great bit of craic.’

It was a great evening for a great cause.

‘i smoked then, we all smoked! we didn’t know the dangers of smoking’