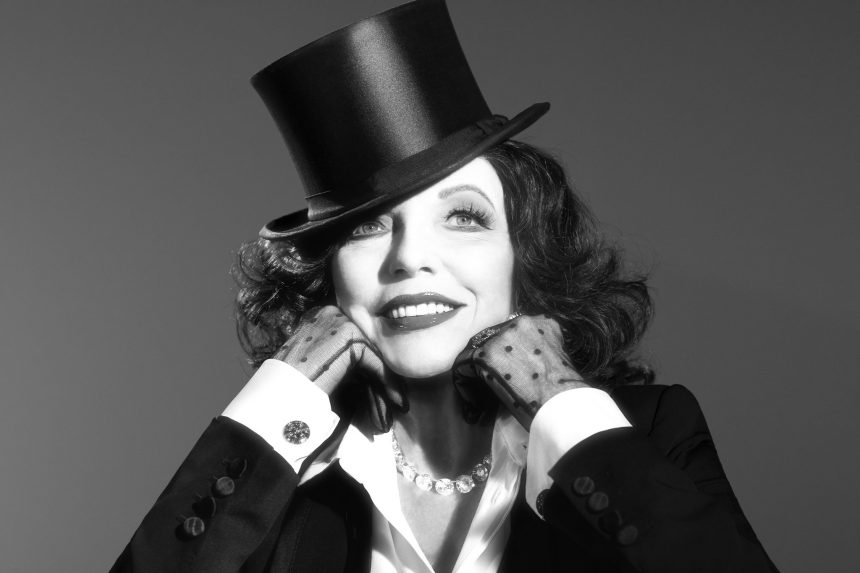 Joan Collins on Her Legendary Style and How Donald Trump Influenced Her Character on Dynasty..

From Dynasty to damehood, Joan Collins’s reach as a fashion icon remains unparalleled. Here, she sits down with her goddaughter Cara Delevingne to discuss the elements of style.

JOAN COLLINS: Hi, darling. How are you?

CARA DELEVINGNE: I’m good! Let’s talk fashion. Who are your favorite fashion designers and why?

JC: Well, obviously Valentino, darling. Because I’ve known Valentino Garavani since 1968, when I first went to his atelier in Italy. I needed to borrow something for a TV appearance in Rome, and somebody suggested I go to him. I borrowed a divine short, beaded bolero, and ever since then he’s been a great friend. I’ve been on the boat, I’ve been to his houses everywhere, and now that Pierpaolo [Piccioli] has taken over, you know I still support them. I’m kind of eclectic in my taste—I design a lot of my own clothes. Did you know that I designed a lot of my clothes for Dynasty?

CD: Which is incredible. Did you know there’s a whole Instagram dedicated to what Alexis wore on the show?

JC: Yes, somebody told me the other day. I look at those clothes—and there are thousands of them—and I have no recollection of wearing any of them. It was a long, long time ago. But apparently everybody is starting to look at Dynasty again, as well as the new one. People seem to like the remake.

CD: Of course. If you look at all the runways recently, like Saint Laurent and Louis Vuitton, they’ve all started using very Alexis-esque fashion, with big shoulders and animal prints and stuff like that. Why do you think designers are bringing back that kind of style now? Why does it feel current?

JC: I’ll tell you. Because it’s extremely flattering to have big shoulders. It makes your hips look smaller and your waist tinier. The styling was a bit over-the-top in the ’80s and ’90s: Some of the earrings were too big, the skirts too short, and the shoulders too exaggerated. But on the whole I think the look was fabulous. I have to say, I don’t think today’s fashion is nearly as flattering. I mean it’s flattering to somebody of your generation maybe but not mine. And I think perhaps that’s why they’re going back to more of a tailored look with the big shoulders and the pantsuits.

CD: I think the ’80s were about power dressing, which is something women are trying to get back to now.

Jc: And Alexis was very clever in that way. She was like anybody in business—you have to be manipulative and devious and clever to be ahead of the game. I based that character slightly on my then friend Donald Trump, who was far away from becoming the president at that time.

CD: Tell me about the change you’ve seen in the way women are treated now compared to when you first started. How much has it changed? Should we be proud of how far we’ve come, or do you think progress is moving too slowly?

JC: I think in certain parts of the world it’s moving, yeah, at a reasonable pace. I think that certainly actresses, models, and people in our business have been able to make a difference. You won’t find producers and directors and actors talking to women in an insulting way or making passes at them or feeling them up or doing any of the things I was told I had to expect when I was a very young actress. It was horrible, but back then you just put up with it or did the old knee-in-the-groin bit, which I did a lot.

CD: I’m sure you did that many times.

JC: Right! I think we have a long way to go still. But I’m glad to see that younger women won’t put up with any of that. My granddaughter, who’s 21, works in a restaurant. There’s lots of people who come in and make passes at her or say suggestive things. She tells me, “Oh, I just ignore them or elbow them.”

CD: [The writer] Gore Vidal once said you were one of the only celebrities he’d ever met with a sense of humor. I totally agree with him: You are one of the funniest people I know. Why do you think humor is so lacking in Hollywood these days?

JC: Everybody has to be so careful now because people get offended so easily. There’s a whole slew of things that you cannot make fun of anymore. There’s no humor left.

CD: When you married Percy [Gibson], you told an interviewer, “If he dies, he dies.” Which is the funniest thing I’ve ever heard in my whole life. How long have you been married to him now?

JC: Seventeen years and eight months. You came to the wedding, darling. You were nine or something, and [your sisters] Poppy and Chloe came. You danced and pranced, and we had a really good time.

JC: Yeah. And after Roger Moore helped her down from the stage, she said, “I couldn’t hear the band.” And he said, “That’s because there wasn’t one, Shirley.” Because she was singing a cappella. It was a wonderful wedding at Claridge’s. I love Claridge’s.

CD: What do you think the secret has been to the success of this marriage with Percy?

JC: Oh, well, first of all we became friends before we went to stage two. We like the same things. We have the same desires in life. And also the fact that even though he’s some 30 years younger than me, his mother had him very late, and his father was two years younger than my father. So we were both brought up with a certain set of values. He’s also a marvelous person. Totally wonderful. He just saved our lives the other day from the fire. Did you hear about it?

JC: We were in our flat in London. We were lying on the bed on Saturday afternoon watching a movie, and suddenly smoke starts coming down the corridor. The guest bathroom was on fire—all the towels were in flames.

JC: I grabbed the phone and called the fire department, and Percy grabbed the extinguisher and started to put out the fire. It was terrifying because he didn’t get it all out, obviously. And so the fire department came 10 minutes later: three fire trucks, two ambulances. They closed the streets. I was out on the pavement barefoot, in a dressing gown.

JC: And the fire department praised Percy very much and said, “You have saved the building from burning up,” which he did. When the head firefighter came in, he said, “You know, what you did was wonderful. But don’t ever do it again. It was very stupid.” He went into a room full of smoke. But that’s the sort of person he is. So that’s our latest saga.

This article originally appears in the November 2019 issue of Harper’s BAZAAR, available on newsstands October 22.Hair and makeup: Joey Maalouf