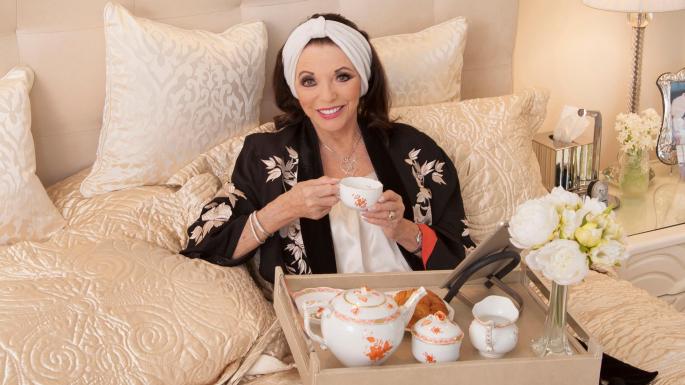 Joan Collins on the joys of nesting, a cockroach invasion and a haunting stay in Venice

‘Suddenly a knife that had been hanging on the wall shot across the room and embedded itself in the mantle. Then an urn came crashing down’

When it comes to how my home should look, I know exactly what I want, so having an interior designer would be a complete waste of time. All I need is a contractor with a certain amount of flair to execute my visions.

What I’ve always found is that the building will let you know what the theme should be. In France I’ve gone for Provençal, New York is deco, LA is ultramodern and London is stately empire with dashes of Louis XIV.

Which one is your favourite?

Just recently, while I was recovering from a heavy cold, I decided my favourite room is my bedroom in London. This is where I feel cosiest and safest. It’s a warm and soothing space, covered entirely in peach — peach drapes, peach sofa, peach carpet and peach sheets. It’s very Madame du Barry. Imagine the most comfortable suite at the Ritz, with a huge balcony and french windows that span the entire room.

What item could you not live without?

Lipstick! Nothing can pick me up like a wonderful pink-red lipstick. Oh, and my American Express card.

Which book has survived all moves?

I never tire of Dickens. He is so descriptive and witty. His stories move at a galloping pace and he rarely — I would venture never — wastes words. You never find storylines that don’t resolve or characters who don’t have a reason to be. Great Expectations, David Copperfield, A Tale of Two Cities… I go back to them again and again, and always find something new.

Do you get homesick?

Yes. I’m a big believer in nesting. If I’m travelling with a play or my one-woman show, I pack things that make me feel I’m back at home — family photographs, pillows with witty sayings. I do this with my dressing rooms, too.

Do you have your own sanctuary?

Oh, yes. Percy [Collins’s fifth husband, the theatre producer Percy Gibson] likes to say that whenever he’s looking for me, he heads straight for my closet, where I’m forever reorganising. And when I’m looking for him, it’s in the office, where he’ll be furiously typing at his computer.

Is Percy any good at DIY?

Oh, he’s a DIY pro! My sister, Jackie, lost count of the jobs that Percy could handle — electrician, carpenter, picture framer, jewellery repairer. On and on.

What was your worst house experience?

Arriving in New York with my infant children, we shared an old brownstone with friends, the Bricusses [the composer Leslie Bricusse and the actress Yvonne Romain], and their son, Adam. We were immediately invaded by an army of cockroaches. They even found their way into the children’s cribs. We had to evacuate in the middle of the night and, to this day, we refer to that house as the “Maison Cafard”.

I also had a scary stay in a palazzo in Venice. A group of us landed in the worst thunderstorm in decades. At dinner, the windows kept flinging open and the lashing rain was terrifying. On the wall was a painting of a beautiful woman who had been the lady of the house — and she’d been murdered. No one knows how, but that evening the little foil-coated almonds that decorated the table had been formed in the shape of a body. The butler told us that was where the lady had been found. Suddenly a knife that had been hanging on the wall shot across the room and embedded itself in the mantle. Then an urn came crashing down. We packed and moved to the Gritti hotel.

And your worst property mistake?

Not buying a fabulous penthouse with a balcony overlooking Manhattan at the Empire House. It was offered to Tony [Joan’s second husband, Anthony Newley] and me for $150,000 in the 1960s, and would probably be worth tens of millions today. I begged Tony to buy it when he was the toast of Broadway, but his financial advisers didn’t want him to own any property for tax reasons. Such a shame.

I am a hopeless gardener, but, as Jack Benny said, “How do you get to Carnegie Hall? Practise, practise, practise.” So, every year in the south of France, my first stop is the garden centre to buy all my favourites. Then I organise my husband and any house guests — planting, trimming, lugging pots and generally mucking in. Don’t come and visit if you want to keep your hands clean.

The one that got away — the dream home you almost had?

I always say, “Never miss anything that can’t miss you.” However, my house on Cabrillo Drive, in Beverly Hills, caused a lot of heartache. I didn’t want to sell it, but an accountant didn’t file my taxes for two years, so I had no choice. I consoled myself by buying a beautiful flat in London.