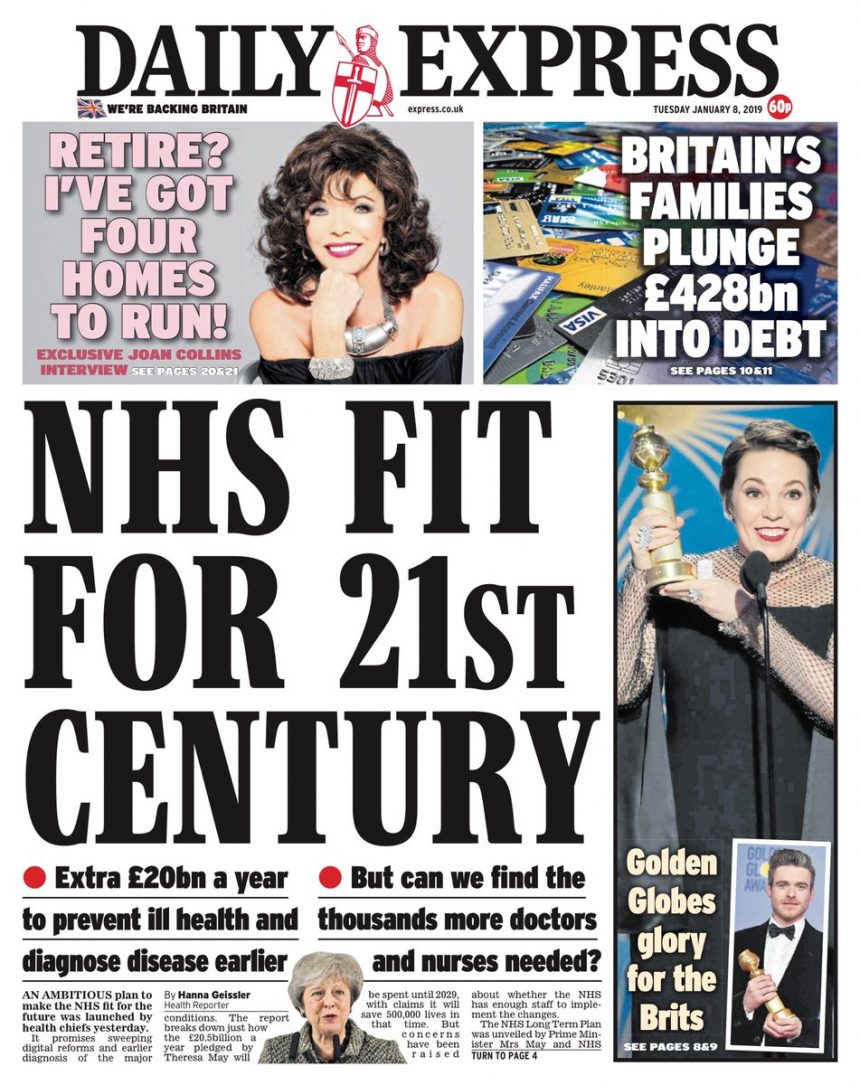 Joan Collins: How can I retire when I’ve got four homes to run?

As she prepares to tour with her one-woman show, the forthright star gives SUE CRAWFORD both barrels on the decline of female glamour, Strictly and the importance of keeping busy

SHE’S been in showbusiness for seven decades and has well and truly earned her place as a great British icon, but don’t even think about asking Dame Joan Collins whether she’s ready to retire. “I have to say the most boring question I’m asked is if I’m going to retire!” she says with that famous suffer-no-fools glint in her eyes. “I’m very happy doing what I’m doing.” She adds: “I don’t have a bucket list. I’ve done everything that I want to do. What would I do if I retired? Who’s going to support me? It takes a lot of money to run four homes and I love working.”

The properties she refers to are in London, New York, Los Angeles and the south of France. But while London-born Joan leads an international life, ask her if she still feels British and she doesn’t hold back.

For while modern PR-savvy celebrities carefully curate their public utterances for fear of being misrepresented and attacked on social media, the legendary actress still retains her famously dry wit and refreshingly never minces her words.

“English actually,” she says briskly. “Although that’s not considered okay to say. Strangely enough you can say you’re Scottish or Welsh or Irish, but for some reason a lot of people get offended when you say you’re English? Why? “I don’t care what people say. I’ve got to a stage in my life where I say what I think, but within reason. Obviously you mustn’t hurt people’s feelings and you try not to be politically incorrect, but I read a wonderful thing about Ralph Fiennes the other day.

“He said: ‘I am so sick of people telling me what I can and cannot say.’ And I think he’s quite a liberal. So I circumvent that by being quite careful what I say.” Joan’s idea of careful however is probably quite different to most people’s and in the next breath she’s sharing her fabulously uncompromising views on beauty.

“I don’t understand women who don’t moisturise or use night cream,” she says firmly. “I’m very disciplined. I don’t go to bed without always thoroughly taking off my make-up and always putting on night cream. My mother had me and my sister Jackie doing that when we were 14.”

She adds: “As a young teenager I was fascinated by the styles of the 20s, 30s and 40s, I was drawn to the women of that era and then I started watching the movies and looking at photographs of all the actresses of that time. What they wore was impeccable and beautiful.”

Those days are of course long gone and Joan can’t resist sharing her thoughts on why that is the case. “Women had more time to spend on themselves then because they weren’t addicted to television, Instagram and Twitter and all these things people do today,” she says with typical candour.

“I heard that the average was two to four hours a day on devices. Now if you do that you don’t really have much time to exercise or take care of your skin.

“I also think that the standard of clothes in the shops is pretty low. I don’t really think there’s much in the shops that I like that’s affordable frankly, it seems to me that there are so many different types of jeans, anoraks, coats and jumpers that are really quite boring.”

That’s a word you would never use about her dress sense. At 85 Dame Joan cuts an impressive figure. Glamorous, trim, spritely and immaculately turned-out, she has the appearance of a woman decades younger – and the career of one too.

Last year she joined the cast of the Emmy award-winning US series American Horror Story, this month she’s popping over to Hawaii to film a guest-starring role on Hawaii Five-0 and she’s currently preparing for next month’s UK tour of her new one-woman stage show Unscripted. The show promises a wealth of stories and gossip from a career which saw her begin as a 1950s Hollywood starlet, before moving on to cult 1970s films, The Stud and The Bitch, based on the best-selling novels written by her younger sister Jackie.

OF COURSE there will be plenty of tales too from the role that established her as one of the biggest stars on the globe – that of scheming vixen Alexis Carrington on the American prime-time soap opera Dynasty. Joan boosted the series’ ratings from the moment she arrived and stayed for eight years.

“During my show I tell stories and recount incidents from my career that I haven’t told before. We also have loads of movie clips of me working with Gene Kelly or Paul Newman or Bette Davis,” she says.

“There’s a lot of audience participation too – about half of it is questions from the audience. Its huge fun, I wouldn’t do it if it was nerve-wracking. Life’s too short.”

Accompanying Joan on stage for some witty repartee is her husband of 17 years Percy Gibson. After her four previous marriages, Percy has been Joan’s rock and they hit on the idea of appearing together after she complained it was too hard being on stage on her own.

The show provides fans with a once-in-a-lifetime opportunity to take a glimpse into a bygone era; on her very first day at work at 20th Century Fox Joan spotted Lana Turner, Richard Burton, Susan Hayward and Robert Wagner. It was an age where leading ladies always looked the part and Joan, having developed a love of fashion back in London, immediately fitted right in.

What Joan does next remains to be seen but one place we will never see her twirling her heels is on the Strictly dance floor.

“Are you serious? You’ve got to be joking!” she laughs. “I love Strictly, it’s very good, but no!”

Dame Joan will be touring in Unscripted throughout the UK in February. For tickets go to: seetickets.com