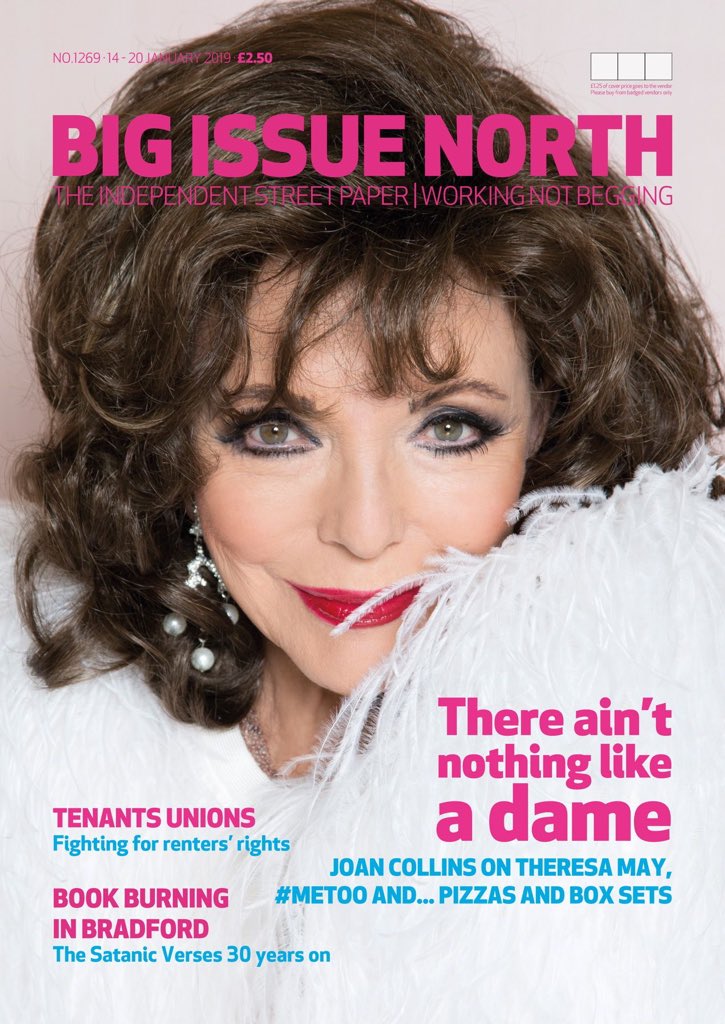 Check out this weeks issue of Big Issue North available now, featuring a fabulous cover and an interview with Joan inside.

Joan Collins insists that if she doesn’t like a question from the audience on her in-conversation tour, she won’t answer it, but she has no such problems with our line of inquiry By Francine White

Dame Joan Collins arrives for our interview, enveloped in a blush pink Max Mara coat and a black fur hat, looking every inch the glamorous movie star. She’s with her husband Percy. He and my husband, who had come along because “he had to meet Joan Collins”, are dispatched to the bar.

At the time we meet, Theresa May is going through yet another Brexit battle. Collins, a Thatcher fan and one-time Ukip supporter, is despairing. “It’s all a mess. I think it is the most difficult position to be in, let alone for someone with diabetes like Mrs May. I wish they would leave her alone.

“I’m for her. She’s always open to criticism about her clothes and her hair, never the rest, except Corbyn who they say is scruffy.”

Then, nailing her Tory colours firmly to the mast, she adds: “If I was prime minister for the day, I’d get rid of Jeremy Corbyn, if you could do that!”

Collins is about to embark on a tour, Joan Collins Unscripted, where audience members get to ask questions and she recounts stories from her life.

“I’ve been doing it now for about 13 years and it works very well. We have two girls in the audience; sometimes we dress them as Krystal and Alexis from Dynasty. They go around with mics, and we say do you want to talk about this or that subject. The audience asks questions.”

There it is, that sudden withering tartness that has stood in her good stead when confronted with all the casting couch letches in her six decade career. “Me Too is nothing new.” she says. “I was propositioned loads of times. I once went for an audition and the producer was lying in the bath playing with himself. I just said, ‘I have to go.’ Needless to say, I didn’t get the part.”

The studio boss Darryl F Zanuck had been obsessed with Collins since seeing her with a diamond in her navel in Land Of The Pharaohs. He propositioned her. “He said: ‘You haven’t had anyone unless you’ve had me.’ I said: ‘No thank you.’”

Likewise she always eschewed the drug culture and says her only weakness is chocolate. “And not being able to say ‘no’ to invitations and then wishing later on I had.”

Where do you begin writing about the story of the life of Dame Joan Collins? Aged 17 she was signed to the Rank Organisation and soon went on to conquer Hollywood. Her leading men included Paul Newman, her pals included Marlon Brando. Once cited as the most beautiful girl in England, her first marriage to actor Maxwell Reed ended after two years, Collins later accused him of raping her. A second marriage to super-talented actor-singer Anthony Newley, father of her children Tara and Sacha, also ended in divorce as did her third to businessman Ron Kass, father of her daughter Katie.

Another short-lived disastrous marriage followed, to Swedish pop singer Peter Holm. The liaison was annulled after just a year. She finally found lasting happiness with Peruvian theatre producer Percy Gibson. Thirty years her junior, the couple have now been married 16 years. Last year Joan starred with another Collins, Pauline, in the octogenarian road trip, The Time of Their Lives and has just guest starred in the US cult drama American Horror Story.

Always open and forthright, she’s still making headlines. Most recently she hit the news after appearing on Piers Morgan’s Good Morning Britain discussing sexual consent. “What’s going to happen to seduction? Is it not going to be allowed any more? Is somebody going to have to ask permission to the parents before they kiss a girl?” she said.

Her voice is clear, her accent almost RP. Like a 1950s British black and white movie heroine, she’s always seemed to have a streak of common sense and, despite the sometimes racy roles, a strong moral barometer. She claims it’s because she was brought up during the war.

“I think it’s something to do with being a Blitz baby. My mother was very frightened all the time and she tried to keep her fear away from Jackie and me. Jackie was four years younger, so she was more or less a toddler. I was told not to give up, not to be intimidated by the bombs dropping. I’d be in the air raid shelter in Marble Arch and the bombs would be dropping, and we would be singing, and I would play with my dollies. I think that may have had something to do with it. And then of course being evacuated many times: Brighton, Bognor, Chichester, Ilfracombe and two other places. You just become tough even though you are very young.”

Her father, theatrical agent Joe Collins, didn’t want her to become an actor and always tried to keep her feet on the ground. “I was voted the most beautiful girl in England by the photographers association when I was 18. They asked my father what he thought, and he said: ‘I’m amazed. She’s a nice-looking girl but nothing special.’ So they did keep me grounded. Not like today. People tell their children: ‘You are the most beautiful.’ We were always told to just get on with it.

“We were not entertained by our parents. The word entertaining didn’t exist. We had our dolls, our toys, our puzzles. We weren’t stinted on anything. We had books, we loved books. Jackie and I read vociferously. We weren’t spoilt or entertained. We would go to the movies, one or twice a week. I loved being taken there. We also went to the variety shows. Well, I did. Jackie was too young.”

Jackie died three years ago following a battle with cancer that she only revealed a week before her death. “I do feel she is looking down on me. I feel she is a guardian angel. She and my mother. I
do feel that.”

She and Gibson spread their time between homes in London, LA and the Cote D’Azur and are happiest at home together. “We’re like any other couple.
We get pizza, watch telly. We love a box set. When we are in LA, we see my nieces, Jackie’s girls. We like going to the movies. Percy likes to cook, so I let him get on with it.”

If she were to encounter herself at 17, about to star in her first film, what would she say? “You’re better than people say you are. I think I got a lot of negativity when I started. ‘She can’t act, she’s pretty and good looking, coasting on her looks.’ Vivien Leigh told me once that she wasn’t taken seriously as an actress until she started to lose her looks. She was a great beauty. She always met with negativity. She was married to Laurence Olivier – he was good looking, beautiful. It’s very unfair. I got tarred and feathered with it. But I’m used to that kind of negativity, I got a lot of it. And my reviews – oh, my god. Really terrible, but I got used to it. I’ve just carried on.”