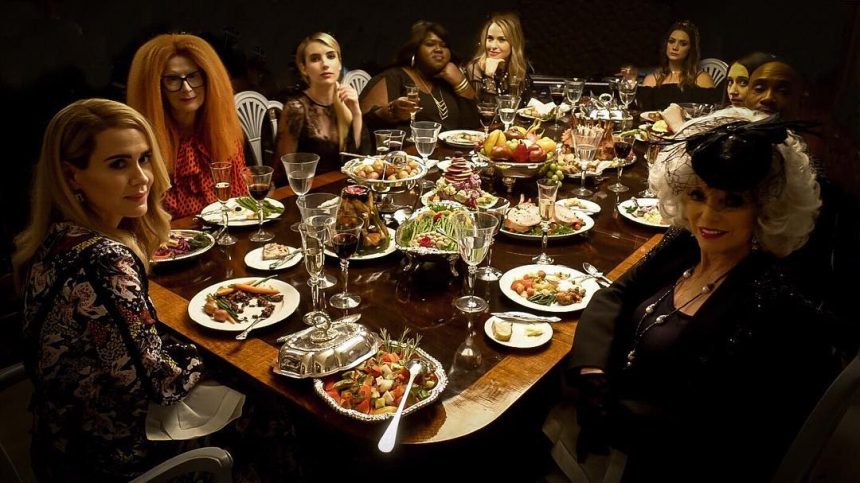 Joan Collins had nightmares over her bloody ‘AHS’ role 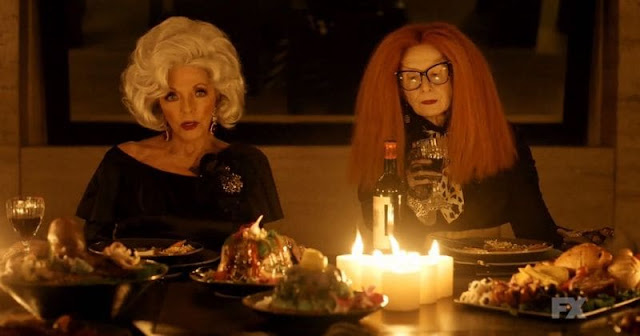 When you pair grand dame Joan Collins and campy Ryan Murphy, things are bound to get weird.

So it’s no surprise that Evie Gallant, Collins’ wealthy, self-absorbed alter-ego in Murphy’s “American Horror Story: Apocalypse,” was hacked to shreds by her hairdresser grandson, Mr. Gallant (Evan Peters), in a case of mistaken identity.

But not to worry — Collins returns to the popular series Wednesday, Oct. 24 (10 p.m. on FX) in a role that’s being kept mostly under wraps. (Murphy posted several photos to social media showing Collins in her new “AHS: Apocalypse” guise.) “I wear this gorgeous silvery white wig and I’m a movie star witch,” says Collins, 85. “It’s a really good episode. That’s all I can say.”

Her “AHS” roles have been memorable for Collins, who most recently spent four seasons playing the Grand Duchess of Alexandra on E!’s “The Royals” opposite Elizabeth Hurley and, in January, will fly to Hawaii to film a guest-starring role on “Hawaii Five-0” (CBS).

She says Murphy, a big admirer, first approached her about appearing in the eighth installment of his FX anthology series last February at a Vanity Fair party. “He said he wanted to write a role specifically for me and wanted to make it very interesting and good and something I could sink my teeth into,” she says. “He didn’t specifically say what it was; that’s the way Ryan works. He doesn’t tell his actors what they’re going to be playing.

“I only knew that I was going to be working with Evan Peters, who is such a wonderful young actor and a pleasure to work with. And I loved working with Kathy Bates [who plays Ms. Miriam Mead]. What an honor.”

Collins isn’t as gushing about the scene (in Episode 2) where Evie, clad completely in a black rubber suit (don’t ask), was eviscerated by her grandson, who assumed grandma was someone else with whom he’d had an earlier tryst.

“I’m a bit of a squeamish person, so I don’t really watch horror films or bloodthirsty films very much,” Collins says. “I was lying there for hours and hours under a sort of coffin with a board on top of me and a dummy in which all the blood was [shown]. I’ll never eat sausages again. I had to put my mind in a different place so I didn’t concentrate on it too much.

“I have to admit I had a couple of nightmares after that.”

Collins will continue touring with her one-woman stage show (“Joan Collins Unscripted”) in February in the UK — she had to delay the tour while shooting “AHS” — but the actress, best-known to TV viewers as Alexis Carrington on the original “Dynasty,” says she probably won’t headline another series.

“Oh, I don’t know. It’s a big commitment,” she says. “I’ve been approached … I’ve had a good long run and I take each step as it comes. I would love to do another series but maybe as a guest now and again — I don’t think I could do what [‘Law & Order: SVU’ star] Mariska Hargitay does, for example, be in a show for all those years and be on it every week, which is what I did on ‘Dynasty’ … it’s too exhausting and the same old thing all the time.”