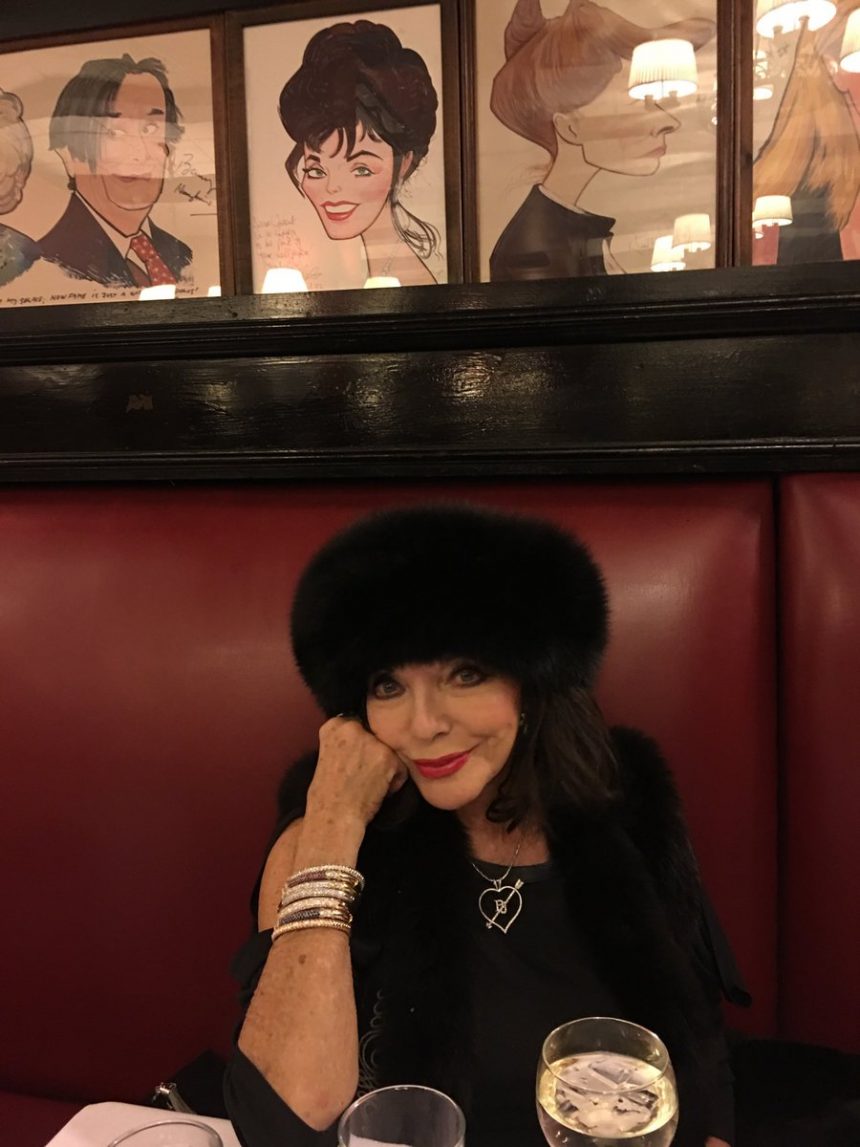 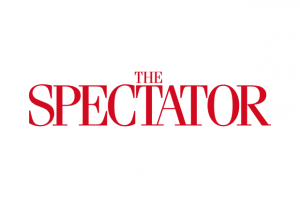 Joan Collins: Why are people so baffled by the title ‘Dame’? 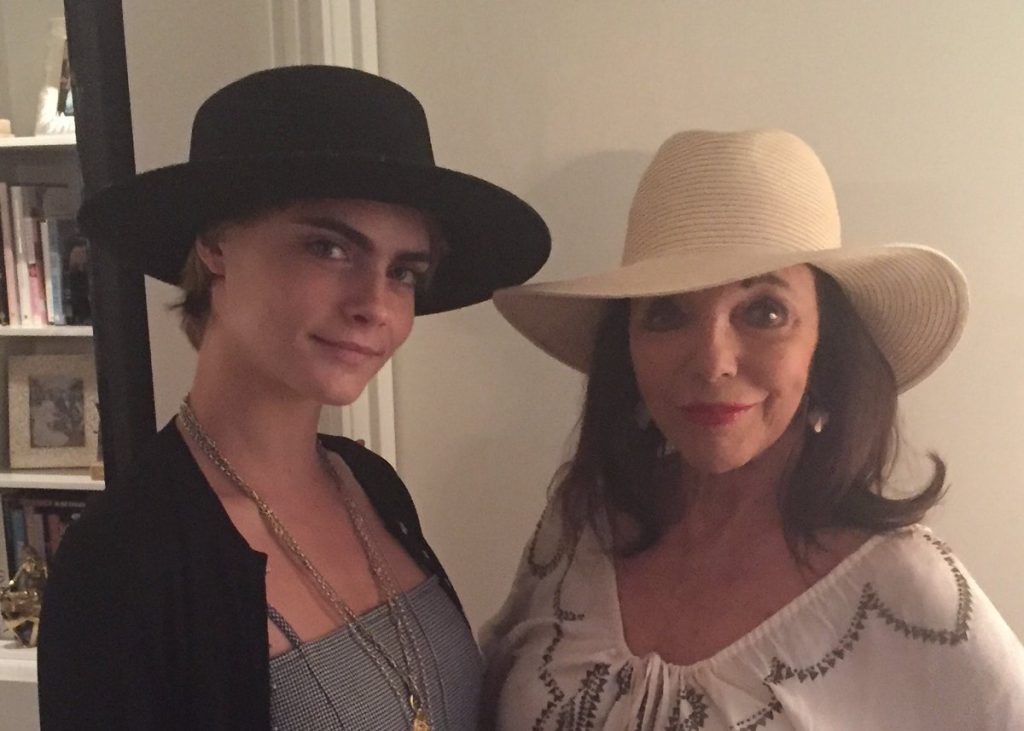 Attending my goddaughter Cara Delevingne’s 26th birthday party at the trendy Chateau Marmont hotel in LA, I was interested to see how today’s young dress to party. Forget the fairy frocks, cocktail dresses and lounge suits I remember from my Hollywood parties in the golden age; it was shorts, ragged jeans and T-shirts emblazoned with cryptic messages for the boys, and minute, fabric-saving, low-cut dresses for the gals. Or perhaps it was the other way around. Fortunately the Chateau hasn’t yet succumbed to the fad for gender-neutral toilets that almost every institution in the UK has adopted. Where is a girl supposed to apply some lippy and have a quiet gossip nowadays? These temples of privacy and comfort are slowly being stripped away from us ladies and it’s time to reclaim them before we are reduced to locking ourselves in the supply cupboard to get some ‘me time’ or to escape the clutches of a predatory boss. The party was amusing, with half-naked strippers parading down the stairs and a mermaid frolicking in the pool. But it’s better I stick to my own hangouts where a knee-length little black dress isn’t out of place.

I admit I like going to restaurants. I enjoy the theatre of them and I love good food. There are two or three in LA, London and Saint Tropez that I frequent regularly, where they greet me immediately upon arrival and are always happy to see me. So when asked to dine in a different boîte, I normally decline. I’m not keen at being stared down haughtily at the entrance by a millennial who asks, usually in the squeaky Minnie Mouse voice which is so de rigueur nowadays: ‘What is your name?’ When I recently replied to this query, she asked me to repeat it because she didn’t understand my ‘accent’. 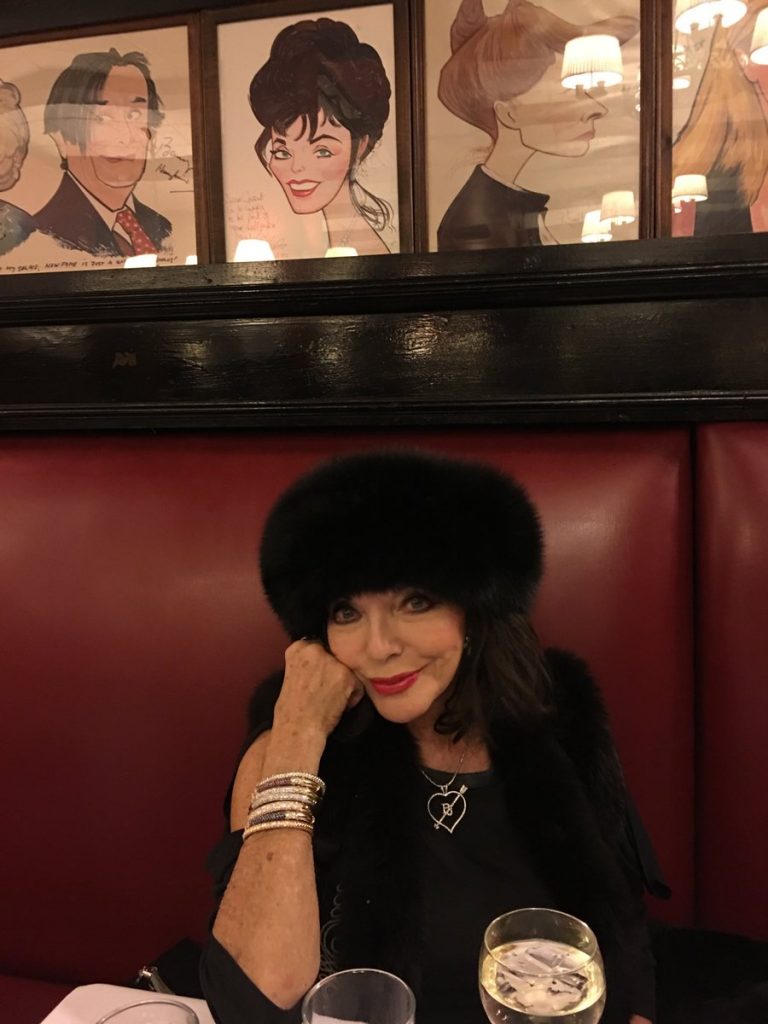 Joan with her caricature at Legendary NY eaterie Sardi’s

As far as using the title ‘Dame’, I never do. Not that I’m not proud of it — I am, immensely, and I love it when a particularly clued-up person uses it. However, in America and France most profess to be baffled and don’t understand the significance of the prefix, so I feel elitist if I mention it. Every now and then a Frenchman will take a stab at it, but it usually ends up as ‘damn’. Even the English seem dumbfounded by the title, so much so that when anyone makes a phone call on my behalf and says, ‘Dame Joan’, they are asked to repeat it. Eventually, in frustration, they just say ‘Joan Collins’, which invariably the person on the other end of the line misinterprets as ‘John Collins’. Most seem to comprehend ‘Sir’, but ‘Dame’ is beyond their understanding. I’m mostly referred to as ‘Ms Collins’ and sometimes ‘Miss’ or ‘young lady’. How kind — or blind!

I have just struggled to open a tiny travel tube of toothpaste, ruining my manicure in the process. Cutting open the cardboard cover with scissors was no problem. Unscrewing the super-tight cap was an effort, but it was the minuscule fragment of silver foil covering the mouth of the tube that confounded me. It had an even more microscopic tab which immediately tore off, so I had to resort to a variety of different tools to achieve my goal. These consisted of a hairpin, nail-clippers, scissors, a fork and finally my thumbnail, which promptly broke. They have similar foil covers on pints of milk, with tiny tabs that declare ‘lift and peel’ as if this were the easiest task to achieve. Invariably, after an effort worthy of Charles Atlas, only the plastic sticker that says ‘lift and peel’ comes off, leaving the foil undisturbed. Earlier this morning I spent several minutes trying to stab off the plastic cover on a cucumber with a fork. It now looks like it was riddled by a machine-gun — like a vegetarian Valentine’s Day massacre. 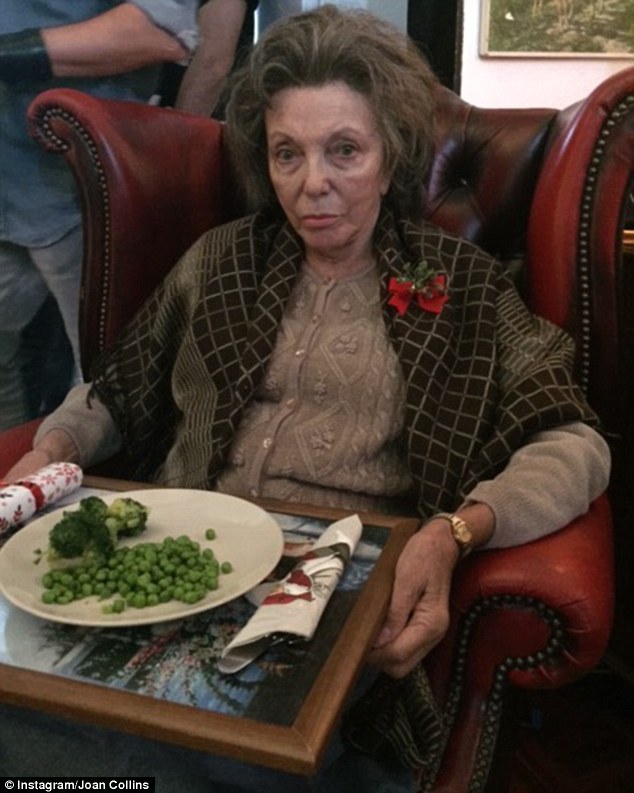 Joan in her Best Actress role of HIlda in ‘Gerry’

I was thrilled to have been awarded ‘Best Actress’ at the LA Shorts Film Festival in LA, for the first outing of my new movie Gerry. In the 20-minute film, I play a poor elderly widow who is looking for love via newspaper lonely-hearts ads. Very 20th-century, I know. Much was made of the fact that my make-up expert, Alyn Waterman, succeeded — with the application of prosthetics and wrinkles — in making me look like a worn-out woman in her seventies. Ironically, that’s actually younger than I am. Approbation is what I and my fellow thespians seek. Kathy Bates, a Best Actress Academy Award winner, recently told me at dinner that her mother was often asked why her daughter became an actress. She replied: ‘When she was born the doctor smacked on her behind. She thought that it was applause and she’s been looking for it ever since.’