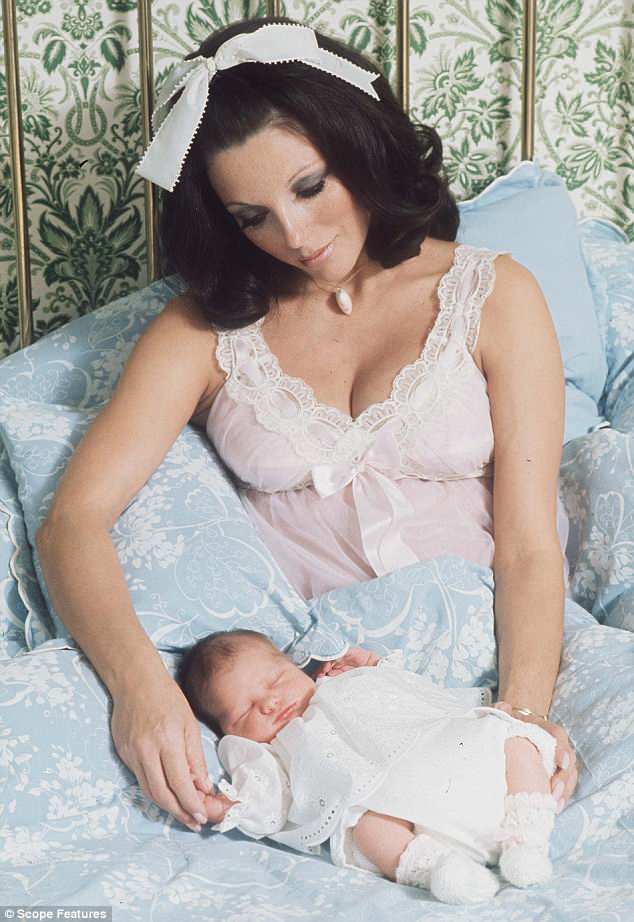 What on earth is wrong with a woman wanting to look as good as possible after the birth of her baby?

The Duchess of Cambridge has come under fire for looking utterly fabulous with her newborn son, Prince Louis, on the steps of the Lindo Wing at St Mary’s Hospital in West London.

Perfectly made up with her hair freshly blow-dried and wearing a flattering scarlet Jenny Packham dress and heels, she looked as though she had just stepped out of a beauty salon, rather than a maternity ward where, seven hours earlier, she had given birth.

Certain sections of the sisterhood were quick to criticise. Others said they felt sorry for her. Former Blue Peter presenter Katy Hill led the way, saying Kate had been ‘robbed of the intimate magic of those first few precious hours’.

The 47-year-old continued: ‘Her haze would have been filled with blow-dries and make-up and tights and heels and a flurry of business to get her camera-ready, to live up to protocol, tradition and expectation as the world’s Press awaited.

But I, for one, applaud the Duchess. Why wouldn’t a woman want to look her best — especially when faced with the world’s media?

Pregnancy can be difficult, is often uncomfortable, and to finally lose that massive bump is a blessed relief.

The Duchess was wise to remove herself from hospital as soon as possible — no doubt aware of the many pitfalls of staying in too long, including avoiding the amateur/professional photographers who might otherwise get a glimpse of mother and baby by taking a sneaky snap of them.

Hospitals aren’t jails, after all, and it’s not that difficult for a crafty individual to gain access, despite all the security measures.

I know because, even more than 40 years ago, a fan managed to get past the porter at the nursing home where I was staying after giving birth to my first baby, Tara, and tried to take one of me.

Luckily, he was stopped by a vigilant nurse. The picture, I feel certain, would have been particularly unattractive.

While pregnant with Tara, I had blithely eaten for two, maybe even three. Over nine months, I had ballooned and blossomed, but felt positive that this massive protuberance — not to mention my huge arms, legs and behind — would disappear as soon as she appeared. How wrong I was!

I gained more than 30lb during my pregnancy and, to my horror and dismay, when I first saw sweet baby Tara, I ran my hands over my stomach and realised it was still there! Not to mention the euphemistically called ‘love handles’, wobbly arms and swollen ankles. I was horrified when I got off the scales, wailing to my doctor: ‘Why didn’t you tell me?’

‘Nobody has a 30lb baby,’ he replied. ‘You should have known better.’

‘Diet,’ he barked. ‘But not until you finish feeding her.’

Although Tara Cynara Newley was the most beautiful creature I had ever set eyes on, I wasn’t delighted either by the natural childbirth that I had opted for, or the dreaded breast-feeding.

My friend, Joanne Woodward (wife of the late Paul Newman), insisted that I must nurse her myself. And although I loved the symbolism of being Mother Earth incarnate, I wasn’t sure whether I could handle it.

I wanted to shed the 30lb and get back into my clothes, but since, in those days, nursing entailed knocking back two or three quarts of milk a day and — can you believe it? — a daily dose of beer, in order to keep everything, so to speak, on tap, this was obviously going to be a hard slog.

So, I gritted my teeth and vowed to do the best I could. Tara was yelling a lot and I was convinced she was starving. I, meanwhile, consumed enough beer to make a lorry driver keel over.

When I became pregnant again a mere 22 months later, I went in the opposite direction and kept my weight gain under 20lb. Joan Collins (pictured with her daughter Tara, as a baby) claims she was back in her normal clothes within a fortnight of giving birth to her third child

But it still took me a good six months to lose it afterwards.

So, by the time my third angel, Katyana Kennedy Kass, came along, I had become an experienced brood mare and did not gain more than 12-13lb throughout the entire pregnancy. As the picture above shows, I was ready for hair and make-up and back in my normal clothes within a fortnight. What’s the betting Kate will be back in hers in good time for her brother-in-law Prince Harry’s wedding next month?

I appreciate that taking time and effort over your appearance is not possible for all new mothers, but, as a woman in the public eye, Kate is different.

I’d be interested to know what the media reaction would have been if she’d emerged straggle-haired, make-up free and wearing a sloppy outfit with trainers!

Not that Kate would have countenanced that for a moment. She also knows that with a clever choice of simple smock — which I have always maintained is the most practical, comfortable and presentable of all post-partum garments — elegance is easily achieved. After all, looking well-groomed is not that difficult. It isn’t too hard to slap on a bit of make-up and have a quick comb-out while still in bed after the delivery. I certainly did! There is also a marvellous euphoria about having brought a new human being into the world. You feel so proud, as though no other woman has done anything like this before.

There is a definite glow about all women who have just produced an infant — which usually lasts for as long as it takes the baby to start waking up 17 times a night. So, it’s perhaps not surprising that Kate looked so attractive.

But most importantly, it is the Duchess’s job to look good and not disappoint the royal brand.

The Duchess is a beautiful woman who looks stunning on every occasion. In sports clothes or ballgowns, she flies the flag for British fashion and beauty.

I was thoroughly impressed by her style and glamour when we met at the Royal Variety performance at the London Palladium a mere five months ago. In a gorgeous, shimmering, slate-blue Jenny Packham gown, she outshone everyone, on stage and off.

I marvelled at the fact that, after watching the show for more than four hours, not to mention being held up before the event by an alleged terrorist threat in Oxford Circus, which closed all the routes for several hours, she looked glowing and immaculate. Joan pictured with her son Sach

After the show, she and Prince William came on stage to chat informally with all the performers. I do not doubt she’d already had a full day of duties, but she dazzled everyone with her charm.

It’s not easy to speak to dozens of people you’ve never met, and be enthusiastic and interested in them. And at four months pregnant, when you are longing to put your feet up, it is no mean achievement.

The Queen has been doing this seemingly effortlessly all of her life, and I know that sometimes it must be tedious and boring, but Kate has cottoned on to what being royal entails, and she doesn’t disappoint.

Without a doubt, our country has the most popular and beloved extended Royal Family in the world. They bring in millions to the national coffers from tourism, and each new member seems to contribute greatly. Hello, Meghan!

But the love affair would soon wane if the younger generation of royals took their responsibilities lightly.

The beauty of Kate is that she takes her role as mother — nurturing a future generation of monarchs — as seriously as she does that of royal consort.

And make no mistake. Once back home, safely cocooned in the privacy of Kensington Palace, I am sure the Duchess kicked off her nude heels, changed her smock for something more casual, and became as relaxed and comfortable as it is possible to be with a newborn baby and two toddlers to cope with.

She may have plenty of staff, but for her three children, there is only one Mummy.

After this photo was taken of me, I snuggled down for the next ten days, concentrating on my new baby, Katy, as well as my two school-age children, Tara and Alexander.

Few mothers of three have lives of untrammelled glamour. So, bravo, Kate, for enjoying your moment in style.

And thank you for showing women that it can be done! You truly are a star!