My 60 outrageous years at the Oscars: Dame Joan Collins on being rushed to hospital to be cut out of a skintight dress and offending every leading actress in the room

By Joan Collins For The Daily Mail

Can it really be 60 years ago that I first tottered down the Oscars red carpet in vertiginous pink satin heels and a pink balloon-skirted gown that I had designed myself?

I was an excited young starlet when I set foot inside the Pantages Theatre, Hollywood, to attend what was then the 30th Academy Awards and I shall never forget it.

I was majorly excited because one of the nominees for the Best Actress award was my very close friend Joanne Woodward.

She was accompanied by her handsome movie star husband Paul Newman and I was with my friend, the producer John Foreman, and my boyfriend Arthur Loew Jr.

Joanne was up for her staggering performance in The Three Faces Of Eve, but facing tough competition from Deborah Kerr, Anna Magnani, Elizabeth Taylor and Lana Turner.

Despite it being the biggest night in Hollywood, Joanne had styled her own hair. As had I.

We had also applied our own make-up and wore our own jewellery. Those were the days!

But Joanne had one up on me and all the other guests that evening. She had designed, cut and sewn her own dress.

Well, Joan, you should see what some starlets are wearing today.

Cut to the crotch, boobs barely contained, legs akimbo — many frocks today seem attached to their wearer by tooth floss. I’m sure she’d turn in her grave.

Joanne was mighty proud of her intricate green velvet dress with matching coat and it looked brilliant when, to our whoops and cheers, she stepped on to the stage to receive the winning statuette.

‘I’m keeping the dress,’ she said when a museum in her home town asked for it to be displayed. ‘At the after-party in 1959, I chatted with the witty and urbane David Niven who had won Best Actor for Separate Tables’ (above together)

How times have changed. And not just in terms of the frocks.

No stranger to the ‘wolves’ of Hollywood myself, I am glad that actresses of today are no longer frightened to speak up about the sexual harassment that, in my day, was par for the course.

I’ve lost count of the times I was called frigid, a shameless flirt and a cold, heartless b**** for rejecting unwelcome advances.

But there is a danger, too, of Hollywood losing its sense of humour in its quest to right untold wrongs.

There was no chance of that back in 1958 when the brilliant Bob Hope was the Master of Ceremonies, trading quips and insults with the likes of John Wayne, Burt Lancaster and Kirk Douglas.

These were some of the most talented, charismatic actors of what is now called the ‘golden age’ of cinema.

Having been an avid movie-goer since I was eight, I was utterly star-struck to see Burt and Kirk perform a hilarious song-and-dance routine called It’s Great Not To Be Nominated, which poked fun at some of the male nominees, including Marlon Brando, Alec Guinness and Charles Laughton.

The number ended with a spectacular stunt in which Kirk stood on Burt’s shoulders, who held him aloft as they danced jauntily off the stage.

It was such a success that, to my surprise, I was asked to perform a version the following year with two other British actresses — Angela Lansbury and Dana Wynter. ‘When, in 1984, I presented the technical awards with Arnold Schwarzenegger, there was a designer on board who insisted I wear a strange melange of styles ‘to go with the theme of the night’. This confection consisted of a long black skirt and a bright red sequin beaded top’

Legendary lyricist Sammy Cahn wrote the lyrics to It’s Bully Not To Be Nominated, which we performed in exaggerated English accents.

Angela and Dana wore slinky satin sheaths while I opted for a tight gold lamé number which, again, I had designed myself since I considered the old-school Hollywood designers outfits too fussy and complicated.

Besides, I didn’t have a dresser to truss me up in the corsets and buttons and bows with which they festooned their evening dresses.

As it turned out, I had to console myself that at least my dress looked good, because the reaction to our skit fell way short of the applause that had greeted Burt and Kirk.

We, nevertheless, trundled on, only discovering later — to our horror — that all the nominated actresses had been insulted by our japes and had taken the jokey lyrics personally.

Granted, the words were pretty unfunny, although we did raise a grin from Shirley when we hissed: ‘Shirley MacLaine’s a talent that’s rare, if you like juvenile delinquent hair.’

Legendary comedy actress Rosalind Russell glowered as we made reference to her age — ageist jokes don’t go down well in Hollywood — so I was surprised to see this year’s host Jimmy Kimmel crack a feeble joke about Christopher Plummer, still magnificent at 88.

It was a shame Rosalind took it personally as she and I got along quite well the year before, exchanging quips when I presented Best Cinematography to Jack Hildyard.

She asked me to explain what a cinematographer does, and I said: ‘He’s the one who shows up first on set before anyone is there, fixes the lens, adjusts the lights, peers through the viewfinder at you and then stands up and asks: ‘So, what were you up to last night?’

At the after-party in 1959, I chatted with the witty and urbane David Niven who had won Best Actor for Separate Tables.

That was also the year the show ended up being too short for the allotted television broadcast. The producer, Jerry Wald, started cutting numbers from the show to make sure it ran on time, but ended up cutting too much material, so the ceremony finished 20 minutes early, leaving bemused host Jerry Lewis to attempt to fill in the time.

Jerry asked the presenters, winners and nominees to come up on stage while he took the conductor’s baton and played a lovely waltz as he told us to, ‘Keep dancing, kids, keep dancing!’.

For ten excruciating minutes, a host of stars such as Dean Martin (Jerry joked of his former comedy partner, from whom he’d split acrimoniously: ‘You never thought Dean and I would be on stage together again’), Natalie Wood, Robert Wagner, Maurice Chevalier and little me had to awkwardly take each other’s hands and prance around while Jerry frantically encouraged us.

Eventually, NBC cut to a re-run of a sports show.

In 1974, I had another encounter with Niven when my then husband, producer Ron Kass, was nominated for best documentary for Naked Yoga.

True to the title, a streaker shot past security and paraded naked on stage in front of Niven, who had the wit and presence of mind to joke: ‘Isn’t it fascinating to think that probably the only laugh that man will ever get in life is by stripping off and showing his shortcomings?’

The audience burst into hysterical laughter.

As the Eighties dawned, stylists came into vogue.

When, in 1984, I presented the technical awards with Arnold Schwarzenegger, there was a designer on board who insisted I wear a strange melange of styles ‘to go with the theme of the night’.

This confection consisted of a long black skirt and a bright red sequin beaded top.

It was backless and almost frontless, which I wasn’t happy about as I thought it was too revealing. I laid out in the sun and got a deep tan to cover my embarrassment. ‘This year I was bewitched into a structured beaded gown by Mark Zunino, with a long train which was constantly stepped on, almost tripping me up’

Arnold, however, seemed quite taken with the outfit and put his arms around me several times in what today would most certainly be deemed ‘inappropriate touching’.

Never one to play the victim, I touched him back, squeezing his massive bicep —which was as hard as steel.

I wasn’t the only one to be surprised when he went on to become governor of California and have a child with his maid.

As the Eighties powered on, it was considered rather tacky to not wear anything but designer duds, and as I was then working on Dynasty I was lucky enough to be able to borrow several outfits I’d worn on the show.

It was also around this time that the legendary super-agent Irving ‘Swifty’ Lazar started hosting his fabulous Oscar night viewing parties at the trendy Spago restaurant.

By this time, most stars who weren’t nominated or presenting preferred to go to Swifty’s party, rather than face the hassle of red carpet madness at the actual ceremony.

Lazar’s parties were a much coveted ticket, as he was meticulous about whom he invited. Competition to be asked was fierce and he had to fend off hundreds of wannabe invitees.

I was honoured to always be on the guest list, as was my late sister Jackie, along with major luminaries and legends such as Billy Wilder, Robert Mitchum and Cary Grant.

It was a veritable Who’s Who of Hollywood.

In 1992, I went to my table at Spago escorted by Swifty’s right-hand man, Alan Nevins, and saw that he was seated next someone called ‘Ms Ciccone’.

‘Me,’ said a little voice in reply and I turned to see Madonna wearing a black beret, a string of pearls and a simple blue top.

I wore a long, black lace dress which I had bought myself, unlike most of the actresses on the red carpet who were loaned their designer dresses and bling.

In the days before freebies and Instagram, if you can imagine such Medieval times, privacy was also highly prized.

Swifty did his utmost to keep his parties truly private and became enraged if people took pictures inside.

Each year, his table arrangements were more and more spectacular and he forbade any of his guests to stand up and mingle during the television broadcast.

One year he banned Raquel Welch because she was socialising too much!

Swifty died in 1993 and his legendary parties were taken over by Graydon Carter, editor of Vanity Fair magazine.

Graydon continued the tradition of inviting the great and the good to marvellous seated dinners to watch the TV broadcast. The event continues to be a required stop after the awards along with Elton John’s AIDS Foundation party.

The now famous Vanity Fair party started at Morton’s restaurant, then Cecconi’s (which was great because Elton’s was over the street and people could walk back and forth between the two).

It then moved to the Sunset Tower Hotel, finally becoming so big they had to erect a tent across a main thoroughfare to connect it to the vast Annenberg Center.

Jackie and I went to both parties every year, and we always had the most brilliant time.

We were quite the Oscar regulars!

Which made my Oscars fashion disaster in 2011 all the more embarrassing.

I’d squeezed myself into a mauve and violet Georges Hobeika gown, gifted to me by Georges himself for a photoshoot. 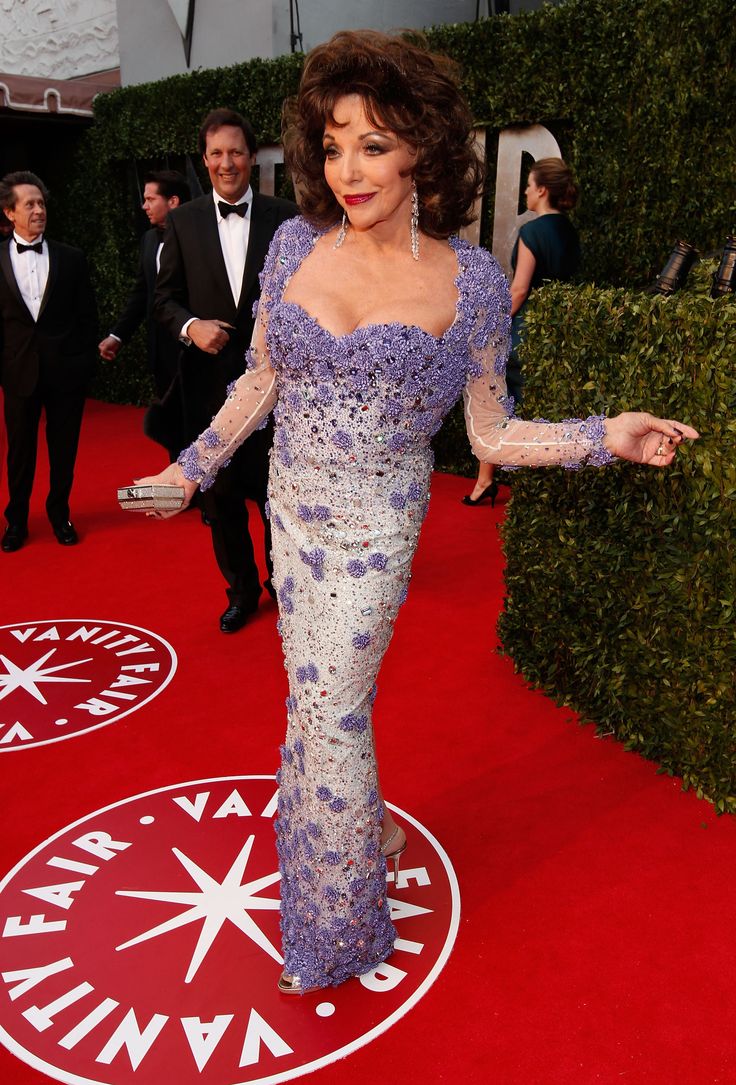