The lives and loves of Dame Joan Collins

The actress is bringing her show to Dubai for the first time, and tells The National how she has no plans to retire just yet 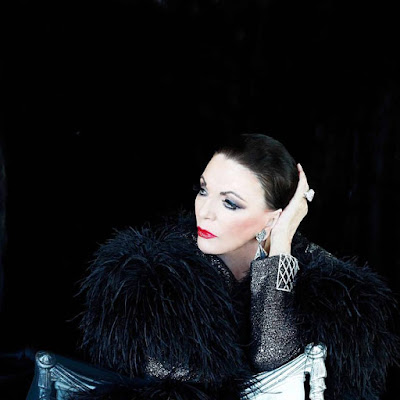 Dame Joan Collins is on her way to Dubai for her one-woman show. The Golden-Globe winner will tell stories from her illustrious seven-decade career and share secrets from her high-profile relationships. Dame Joan also intends to take her lead from the audience at Dubai Opera, answering their questions, while the show will feature never-before-seen footage from the Hollywood A-lister’s life.

“It’s a show where you can ask questions of me about particular subjects – many subjects including marriage, husbands, children, movies, Hollywood,” she says. “I’ve never been to Dubai before and I’m looking forward to going. I hear it’s a wonderful city, with an infrastructure that is fabulous; everybody is very hardworking and taken care of.”

What a life she has to talk about. The actress grew up in London during the Second World War and made her stage debut at the age of nine. She then went on to study at the Royal Academy of Dramatic Art (Rada). At the age of 22, the actress headed to Hollywood to seek her fortune, landing roles in several popular films but still never really hitting the big time.

In 1981 however, Dame Joan landed the role she would go on to become best-known for, Alexis Colby in the soap opera Dynasty. Her manipulative and treacherous fictional character is credited as being the main reason that Dynasty was the most popular television show in 1984. (Dame Joan pronounces it “Die-nasty”.) The actress’s personal style in the ’80’s mirrored that of her character. In 1989, the year the show ended, she was awarded a Golden Globe for Best Actress in a TV series. Think huge hair, lots of sparkly jewellery, eyeshadow and shoulder pads. And not a lot has changed.

Dame Joan’s career has been prolific. She has starred in 65 feature films and dozens of TV series, and is an author – her novels and memoirs have sold more than 50 million copies. In 2015, she was made a Dame by Queen Elizabeth II for her services to charity.

Her latest film, The Time of Their Lives, was released in March. Co-starring Pauline Collins, the comedy follows an ageing-Hollywood star who breaks out of her retirement home in order to gatecrash the funeral of her ex-lover in France. Collins has described the film as “a Thelma and Louise for the over-60’s”. 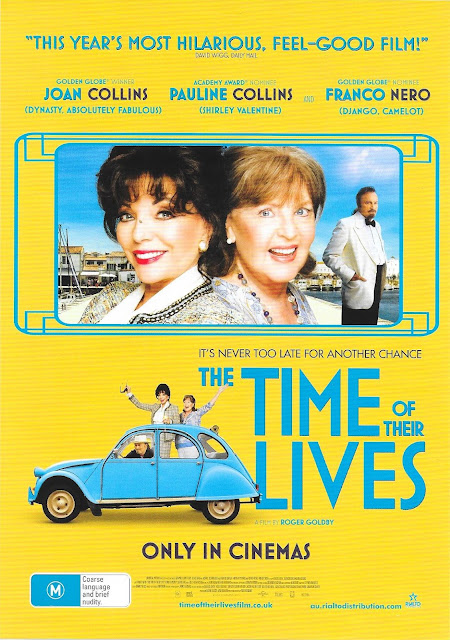 “I would love to do another project. I have several irons in the fire,” she says, “they all involve women – one, two, three or four women, but it’s just very difficult today to get projects going. I was supposed to do two movies earlier this year. The first one we started filming and then eight days into production, the money dropped out. The second one I was supposed to be in – for which they had even given me an advance – never got off the ground. It’s really really hard, to get the financing and everything to put into a film these days, plus the fact that everybody seems to want to have these shoot ‘em up films full of gore and blood.”

With sexual misconduct scandals sweeping the west, it would seem that we are witnessing a shift in the status quo. Dame Joan never lost her faith in women’s power. She is an advocate for women’s rights, last month attending a march to protest violence against women with her daughter, Tara Newley. “A wonderful march against violence in #bristol with daughter @taranewley – I hope it does some good,” Dame Joan tweeted. She says: “I think it’s been ingrained for far too long that women are the inferior sex,” she says. “I mean in many ways, and in some cultures, the idea that women are not as good seems to have permeated into other cultures. That women should just be in the kitchen and raising babies. That’s a shockingly old fashioned way of looking at women”.

She speaks wistfully of her sister, author Jackie Collins, who passed away on September 19, 2015. “As my sister used to say, ‘Girls can do anything’, and she’s absolutely right; I believe in the total equality of women, in every single department, in every single workforce. But I don’t think women are as strong as men, which may get me some hate mail. A normal woman is slightly shorter than a man, and not as strong. I mean I think there are exceptions to that rule, but I do think that women are just as bright, just as intelligent and just as clever, and are able to do just as much.”

In an interview shortly before her death, Jackie Collins told People magazine that she kept her illness from her sister for six years in order not to be a burden. “Looking back, I’m not sorry about anything I did. I did it my way, as Frank Sinatra would say. I’ve written five books since the diagnosis; I’ve lived my life, I’ve travelled all over the world, I have not turned down book tours and no one has ever known until now when I feel as though I should come out with it,” she said.

After so many years of living abroad, is there is anything in particular Dame Joan misses about the UK? “I get all the British newspapers on my iPad,” she says.

She says she misses the people the most. “I miss the humour and the camaraderie of the average English person in the street. I love the English drivers, the black cab drivers, we always have a good chat about current affairs. I do move around a lot and have a particular love for the South of France. I also love LA because I went to LA first when I was in my early ‘20s and I have a lot of friends there,” she says, laughing, “the ones that haven’t died yet.”

Dame Joan has been touring her one-woman show in the UK for more than 12 years. Of her Dubai debut, she says: “I hope you will be very entertained, and enjoy it.”

An Evening with Dame Joan Collins, Tuesday, 8pm, at Dubai Opera. Tickets are Dh295, from www.dubaiopera.com