The Dame reveals to tabloid! why she hasn’t watched the soap opera reboot!

Dame Joan Collins’s lavish, larger-than-life portrayal of the vengeful and extravagant Alexis Colby on Dynasty, beginning with her first appearance in 1981, is as timeless as Collins herself.

But don’t ask her what she thinks of the 2017 reboot of her iconic soap opera. She doesn’t even get that channel.

“Oh, no, I’m not going to be in it, no,” she said last month, speaking over the phone ahead of her Dubai Opera event, An Evening with Dame Joan Collins, on December 12. “I don’t really have any thoughts about it. It’s on a channel that I don’t really get, the CW, so I haven’t seen it and I’m not really that interested. The past is the past, as far as I’m concerned.”

Collins, an English actress and author known for her searing honesty, prolific writing and a plethora of film, television and theatre credits, revealed to Gulf News tabloid! what TV shows she does watch — and why unwinding with a bit of caviar is her favourite pastime.

In Dubai, fans will have the chance to ask you questions in an intimate setting. Was there ever a time when you were more guarded about your stories?

I’m actually a very private person, so I only tell people what I want them to know.

I’m sure there will be lots of questions about Dynasty…

Oh, sure, I’ll answer anything about Dynasty.

Alexis Colby was one of your most iconic roles. What was it about that show that inspired you to give that kind of everlasting performance?

I went into the show, I was told that it was a failing show and that it was about to be cancelled, so they expected me to bring something to it to make it much more interesting to the viewer. That was a challenge, and it wasn’t necessarily all in the writing. But I did find that the character was multifaceted, and wasn’t just the plain old straightforward [expletive] type. I tried to give her a sense of humour, I tried to give her vulnerability, because she was betrayed by her ex-husband and her whole family, and I tried to bring other dimensions to the character.

As someone who keeps herself so busy, do you have time to watch television? If so, what’s on your watch list?

I always watch Strictly Come Dancing, I watch Poldark, I watch Ray Donovan. I watch a couple of cop shows. And I watch a lot of movies. Mostly I like movies. I like old movies — I like seeing movies over and over again. Last night, I watched the Jack Nicholson film As Good as It Gets for like, the fifth time.

Was there a role you turned down that you wish you hadn’t, or vice versa?

Years and years ago, I was offered a role in a film called Sons and Lovers. It was a classic film, and I didn’t do it because someone persuaded me not to do it. The actress who did do it was nominated for the Oscar for Best Supporting Performance — that was Mary Ure.

Are there any particular actresses out there that have impressed you recently with their performances?

There’s a lot of wonderful actresses out there. Really good. I don’t want to specifically [mention]. I will say one thing: I just saw a movie called Film Stars Don’t Die in Liverpool with Annette Bening, and I think she’s a wonderful actress.

In 2015, you were recognised with the DBE and you became Dame Joan. How did that, or how does that, feel?

Well, it doesn’t seem to make much difference, quite frankly. Like yesterday, I went into a restaurant and they said, ‘Oh, yes, Dama Jones Collin, we have a table for you.’ [Laughs.] People call me Dame Collins, or Dem Joanne. A lot of people don’t get it. I think people understand ‘Sir’, as in, you know, Sir Michael Caine, Sir Sean Connery. I don’t think a lot of people — I’m not saying everybody — but a lot of people don’t get that Dame is the female equivalent of Sir.

You recently marched to end violence against women. Do you find it important to add your voice to a conversation that big?

I’ve had a wonderful life, I’ve been very lucky in many things, so if I can help to empower women to make their lives a little more fruitful, I would like to do it, yes. It’s not just women, it’s children I’m very involved with. I have my own charity called the Shooting Star Chase hospice for terminally ill children. It’s to help them and, mostly their parents, because we don’t have funding from the government in this country for that. It’s very important. There are so many children that have life-threatening diseases, so I do what I can.

You’ve authored more than a dozen books. Is there still a book in you that you really want to get out — or one you’d never want to write?

I’ve written 16 books. Four or five of them were beauty books, three were biographies, five were novels, one was an inspirational book. Yes [I’d like to write more], but quite frankly, at this time, at this moment in time, I really don’t have any time to do it. I’ve been very busy making films, last year and this year. I’ve been very busy with personal problems to do with my flat, and I really haven’t had time. But one day, maybe I’ll sit down and think about doing another one.

Finally, what does a day off look like for Dame Joan Collins?

A day off? Ah, well I had a day off the other day — well, yesterday, I had a day off when I had the flu, so that wasn’t so good. But last week I had a day off, and I went and took my youngest daughter Katy — that’s K-A-T-Y — to lunch and shopping and basically hanging out together. And then, at night, we had my favourite dish, which is caviar. I understand that you have that in Dubai, yes? Oh, good. So maybe I can have some. I had caviar and baked potatoes and watched movies with my husband. 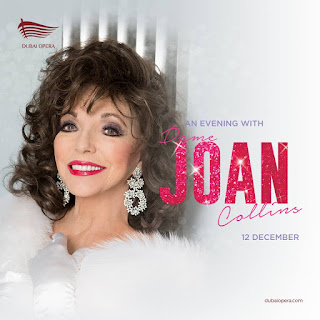 An Evening with Dame Joan Collins will be held at Dubai Opera  on December 12. Tickets start from Dh295.