A Date with a Dame 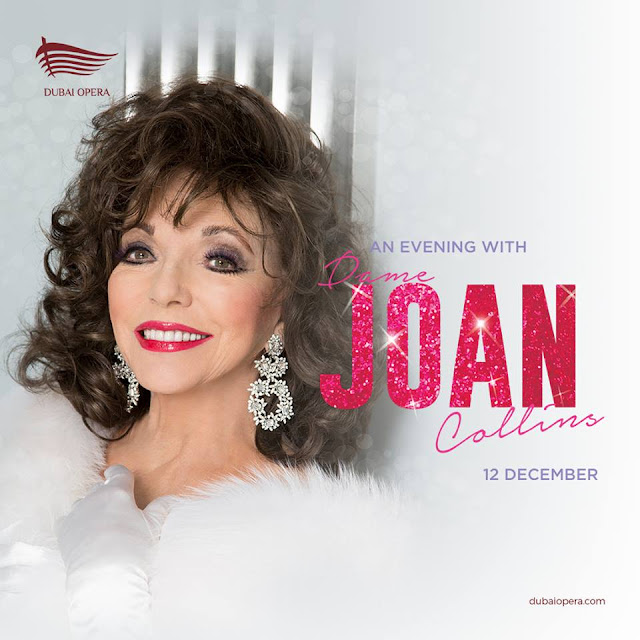 The fabulous Dame Joan Collins will be in the city for one night only – to speak at the Dubai Opera tomorrow. The Golden Globe-winning actress, bestselling author and timeless ‘It Girl’ talked to City Times about her amazing life and career.

WHEN ONE THINKS of Dame Joan Collins, images of shoulders pads, dramatic make-up, perfectly styled hair, glasses of bubbly clinking, and diamonds everywhere can’t help but come to mind. Though this idea of the legendary actress might be a slight exaggeration, she definitely possesses a glamorous, dramatic and a particular brand of charm that simply doesn’t exist anymore. Forget, her clothes, her jewellery, her style or how her face, like all the great beauties of her generation may have changed over the years, one thing that is rich in the essence that makes Dame Joan Collins timeless in every sense of the word, is her voice.

Youthful, feminine, coquettish, elegant, distinct and firm, speaking to the legendary actress and best-selling author over the phone from some unnamed location, it was hard to decide who was conducting the interview. Whether you know it or not, Dame Joan Collins is always the one in power choosing to elaborate rather sweetly on a question you ask or simply say, ‘Yes, I’d have to agree with you there.’

It’s hard to really describe what an interaction is truly like with an iconic woman who has cemented her place in movie history and in the long and tumultuous tale of pop culture fairy tales. One thing is for sure, it’s definitely not disappointing. Dame Joan Collins, as she did in our interview, will entertain you at the Dubai Opera stage on Tuesday, December 12, with her highly anticipated, one-woman show. It’s unmissable.

With a career spanning over seven decades, Dame Joan Collins has appeared in more than 65 feature films and dozens of TV series, including what is arguably her most famous role, that of Alexis Carrington on Dynasty, one of the most highly-rated TV dramas of all time. It really created a phenomena that has influenced characters on the stage and screen ever since. She’s also performed on Broadway, the West End and in national tours across the UK and North America. And like her famous sister, Jackie Collins, Joan is also an accomplished author; her novels and memoirs have sold over 50 million copies worldwide and have been translated into 30 languages.

“I really miss her I have to say,” Joan said of her sister, Jackie, a true pioneer of romantic novels, who died in September 2015.

A philanthropist and renowned humanitarian, Dame Joan Collins is devoted to the wellbeing of women, children and families, regularly lending her support to causes that include finding a cure for breast cancer and empowering children with learning disabilities. In recognition of a lifetime of contributions to the arts, culture and charitable causes, Dame Joan Collins was honoured with an O.B.E. by Her Majesty Queen Elizabeth in 1997. In 2015, she received a Damehood for her services to charity in the New Year’s Honours list. So what did we chat about? Fame, social media, movies and caviar – what else could you talk about with Dame Joan Collins?

What are your thoughts on Dubai?

It’s my first time, I’ve heard that its an extremely thriving city. That it’s a very modern city. I hear it’s quite hot – is it going to be very hot?

You’ve come at the perfect time, the weather is great.

So I’ll be able to do some swimming? Great. I want to take a look around the city.

Can you tell us about your upcoming show?

I’m on the stage with my husband, we have a list of things. It’s kind of funny, I don’t want to spoil it – there is a list of things you can ask me and a list of things that you can’t. Let’s say the list I would talk about is, let’s say Hollywood, children, marriage, Gene Kelly and basically we have somebody that goes around, picks someone in the audience and they say Gene Kelly, I would then tell some stories about Gene Kelly, about how I first met him, how I worked with him. So I have many different anecdotes, stories and events to tell. Some of which, the audience sometimes remind me of something I never talked about before. And in the background we have a videographer, who has film and photographs and also clips from other movies, about the particular events and anecdotes that we are talking about and he will then show them on the big screen while I’m talking.

How do you decide what is public and what you want to keep private?

We just sat down and thought about it. We’ve done the show many, many times in England and also in the US so, no, obviously I don’t want to talk about things that are uncomfortable. I want to be entertaining to the audience, they’ve come to be entertained.

What significant changes have you seen in the industry over the years?

There are too many to go into. I think the most significant change is the rise of social media. Which now young people, many people, instead of going to the cinema, they can see anything they want on their devices. You know, I was saying to my husband I want to go see this movie that’s just come out and he said you can download it on Netflix or whatever it was. I think that’s one of the biggest changes. I think another big change is that people don’t seem to want to see movies about people anymore but about cartoonish kinds of characters. I don’t want to specify what they are because I know they are very popular. But I mean if somebody gave a script today to a studio like Casablanca, which is a great film, the studio wouldn’t make it because it has no popular appeal. Everything is geared towards the young as well. Towards young people aged between 12 and 28 who go out to the cinema. After 28 you know its very expensive. Now people sit at home and they have the lovely TVs and watch them and that’s how it’s changed, one of the many ways.

That’s a shame, Casablanca is a great film.

Yes, it’s about people. I just finished a movie that just came out in April here in England which you  can get it in Netflix called The Time of Their Lives which I did with Pauline Collins, Franco Nero and Joley Richardson which is also just a story about people. It’s quite popular and it’s just about people. There’s no gore, there’s no blood, there’s no violence – just people.

How would you describe this idea of fame?

It’s very difficult to generalise about a subject like fame. There are so many different kinds of fame, you know there is the fame of Theresa May and then there’s the fame of Nicole Kidman – I mean, I don’t know how you can compare.

A lot of young people these days want to get into the industry for the sole purpose to be famous.

Yes, but that’s been going on for years!

Except now they are probably more open about their intentions of simply doing it to be famous, would you say that’s true?

Yes, I’d  have to agree with you there.

Looking back at your career, is there an era or time that you think you wouldn’t mind re-living?

No. I live totally in the present. I don’t look back. I don’t event watch my own films. I think I’ve seen one that I just made, once, I went to the premiere – no, I just live in the present.

Savoury or sweet – do you have a guilty pleasure?

My favourite food is caviar. With sour crème. And I intend to have some when I’m in Dubai (laughs)