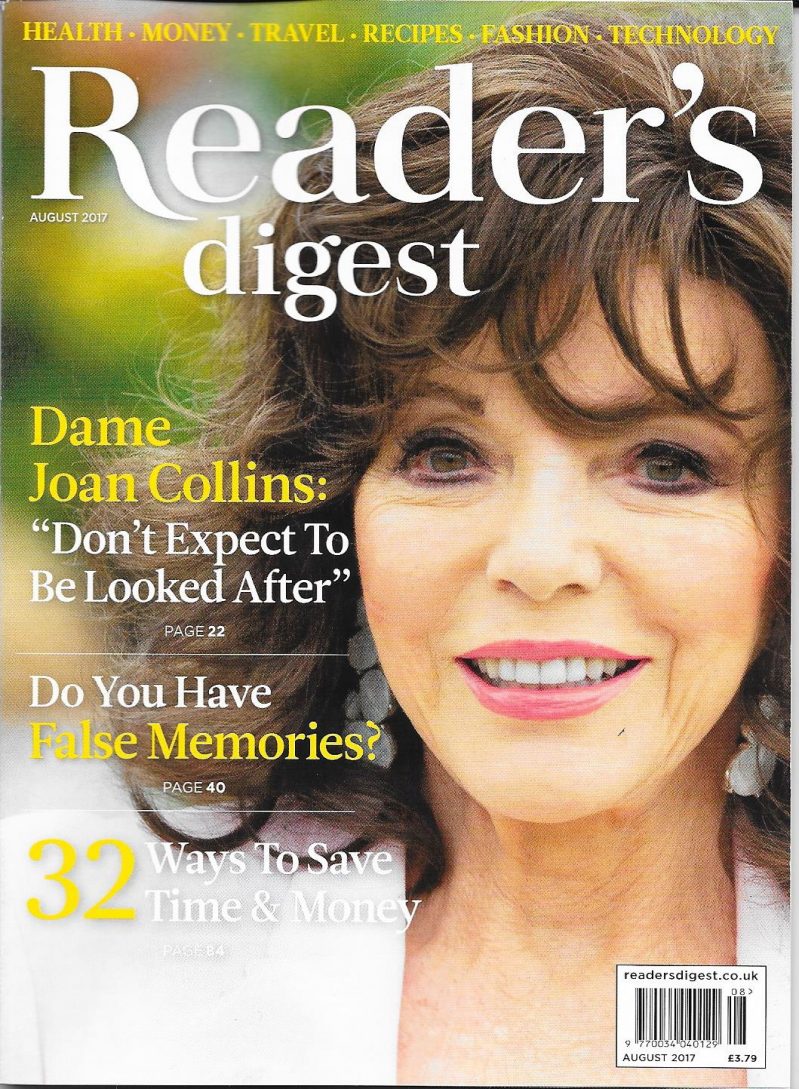 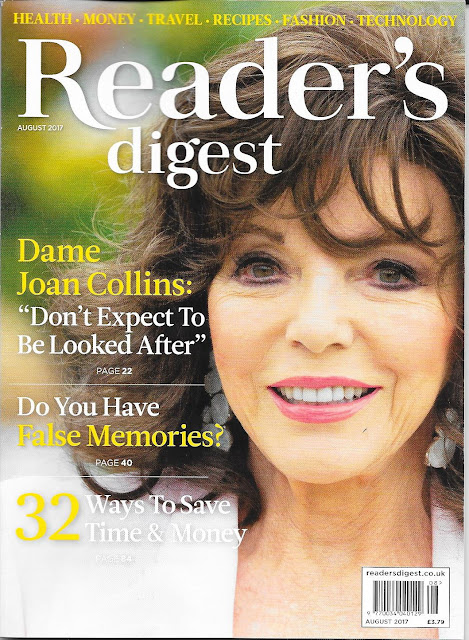 Dame Joan Collins talks to Fiona Hicks about ageing, acting and why you should keep up appearances!

Dame Joan Collins feels “terrible”. She doesn’t divulge why, but a quick check of her busy Twitter feed reveals that I’m meeting her in a week when the ceiling of her luxury London apartment has collapsed, due to a water leak in her upstairs neighbour’s flat.

A terrible situation indeed—but there’s no making do for Dame Joan. She’s holed up in Claridges and, despite the upheaval, still manages to look divine.

We’re here to discuss her latest film, The Time of Their Lives. In it she plays ageing, down-and-out movie star Helen Shelley, who makes an unlikely friend in downtrodden housewife Priscilla (played by   Upstairs, Downstairs’ Pauline Collins). Together the duo hop-foot it to France for a weekend of age-defying adventures.

“It was a fabulous role,” says Joan who, before this script came along, hadn’t appeared in a film for three years. “She’s a very interesting character in so many ways.”

It’s a role that seems made for her. In fact, sometimes it’s hard to know when the beautiful, strong-willed fictional star ends and Joan begins—but a crucial difference is that at the beginning of the film, Helen Shelley lives in a nursing home.

“I don’t think it’s likely that I’ll find myself in a nursing home. Although maybe it is, the way I feel right now,” she states, with a slightly bitter laugh. “But I have a family, children, grandchildren, a wonderful husband…” she tails off, implying that none of these people would relinquish her to care.

“I went to two care homes [to prepare for the film], to see how they were, these old people. I don’t know how to say this without attacking the NHS—well, it’s not the NHS, but some of them seemed somnambulistic. The people just sat there; they didn’t have any vitality.”

The more she talks, the more the winsome, slightly coquettish Joan Collins who’s appeared on the big and small screen for more than six decades begins to emerge. It’s clear that she doesn’t relate to these “old people” in the slightest. 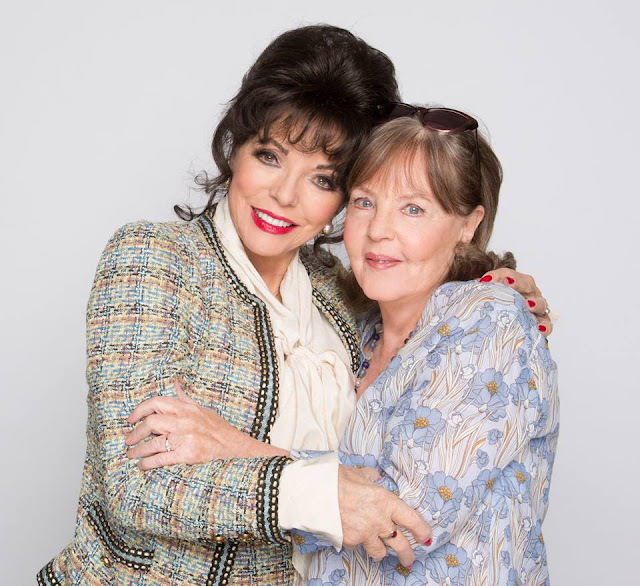 “Anybody has a duty to look after themselves, so that they don’t have to expect to be looked after,” she says, straightening a little. “People need to take better care in their youth and middle age, so that they don’t fall apart when they turn 65 or 70.”

Joan herself still exercises religiously, two or three times a week. “If you continue to do something, you’re not going to lose it just because you get older. I don’t feel any physically different to when I was 45. I tell my husband, who’s 51—I think, I never remember—that he’s got to exercise more, because I exercise more than he does.”

Joan’s husband, her fifth, is Percy Gibson. They married in 2002 and are still going strong, despite the media furore about the age gap. He was there at the start of the interview, as it happens, making sure his wife was happy and settled.

Of course, Dame Joan is used to the scrutiny. Since moving to Hollywood in the Fifties, her life has played out in the public eye. “When I came under contract to 20th Century Fox when I was 20, it was just coming to the end of the golden age in which the studios had total control over their stars. There would be one man—I don’t want to say Donald Trump-ish—who was totally controlling of their studio.

“I was told what movies to be in, I was given beautiful clothes—my experience was very positive. I worked with Paul Newman, Bette Davis, Richard Burton…I just took it all for granted.”

Considering this illustrious record, it’s interesting that her advice to young people wanting to enter the industry now would be, “Don’t. It’s the toughest, hardest, most vicious profession in the world. Out of every one person who becomes Eddie Redmayne or Tom Hiddleston or Emma Watson, there are thousands and thousands of others who are waiting tables. It’s incredibly competitive and you have to have a huge amount of luck.

“Sometimes I see things on television and I think, How did that person get that job? They’re really bad. A lot of it is luck, because it certainly isn’t talent.”

Joan’s own career has been “very up and down”. After a hopeful start, appearing in The Girl in the Red Velvet Swing, The Opposite Sex and Island in the Sun, she never quite made it to studio-favourite status, famously losing the role of Cleopatra to Elizabeth Taylor (“That’s when the studio started to go downhill,” she quips). After taking a few years out to raise her three children, she had bit-parts until she hit the big time again in the Eighties, playing the glamorous Alexis Carrington in TV series, Dynasty.

It’s the part that would define her career, and to some degree, her—as the perfectly coiffed image of Joan is one that was cemented during those heady years of TV success. She famously did her own make-up for the part and has since released her own line of cosmetics.

“I think taking care of your appearance is very important,” she says, fixing me with that arresting wide-eyed stare. “You present yourself, or at least you should, in the way you want the world to see you. My aunts and my grandmother and my mother were all extremely glamorous. In the Forties and Fifties people didn’t go around in jeans with their knees sticking out and t-shirts with slogans. That doesn’t mean I don’t have jeans—not with holes in the knee though.”

Her image has certainly contributed to her enduring appeal, and the public’s fascination with her. Looking back on her life, Joan says, “Other than the fact that I managed to raise three children—none of whom became drug addicts or committed suicide or became alcoholics, which is what a lot of children of famous people do—I’m most proud of the fact that I’m almost the longest-working actress in film.”

She gestures to a picture of Doris Day on the wall. “She’s alive, but she’s not working. Sophia [Loren] isn’t working, but she started after me anyway. I’m quite proud of that.” 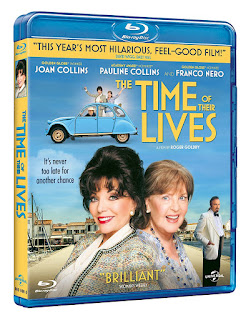 So what does she feel she has left to achieve?

“I couldn’t call myself a driven person,” she muses. “I do what I like.” She flashes that movie-star smile, her collapsed ceiling obviously forgotten for a moment.

“I just enjoy life—I’d like to keep on living.”

‘The Time Of Their Lives’ is out on DVD/BLU-RAY  from July 31st!