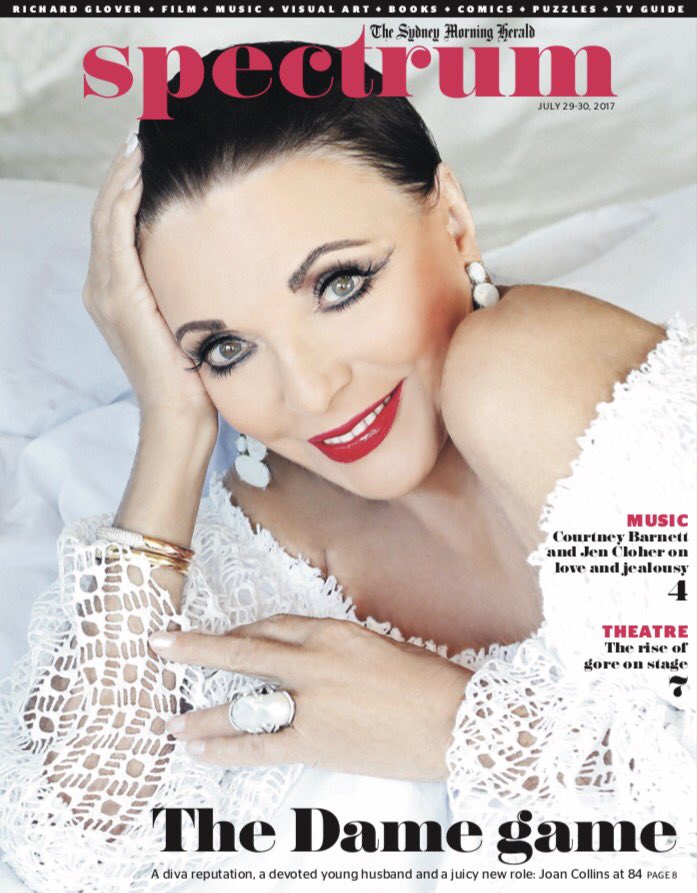 Joan Collins in The Time of Their Lives:

A star’s return to the screen

A diva reputation, a devoted young husband and a juicy new role. Dame Joan Collins is having the time of her life.

“I’m a bit nervous,” I tell the woman who is standing by to check Dame Joan Collins’ make-up. We are awaiting the actress’ arrival in a room overlooking the River Thames and my shirt collar seems to be getting tighter by the second. The make-up artist smiles reassuringly. “She’s really quite lovely. You’ll see.”

Collins, the English doyenne of screen and stage, enjoys a reputation as a diva not to be trifled with. Even when she is promoting her work – in this case the feel-good movie The Time of Their Lives – she makes it clear that “fools” will not be tolerated.

She is, after all, a proper movie star: a peer of Elizabeth Taylor. Moving to Hollywood in the 1950’s, she rubbed shoulders with giants including Marlon Brando, Marilyn Monroe and James Dean. More than two decades later she became even more famous as Dynasty’s Alexis Carrington, television’s shoulder-padded super-bitch. Even today, many people assume that Joan is Alexis and vice versa.

They are wrong, of course – “you can’t be a bitch and play a bitch,” she’ll tell me later – but it pays to be prepared.

The door swings open and Collins stands in front of me. She’s smaller than I imagined – 1.68 metres tall and delicate. Her bright orange jacket – a Carla Zampatti we discover after she forgets the Australian designer’s name and asks me to rummage in her collar for the label – is twinned with a white blouse, white skirt and black strappy heels. She is lightly tanned and her coiffed raven hair makes a frame for diamond earrings and lips painted vivid red with a lipstick I’m reliably informed is called Cupid’s Bow Metamorphoses.

She fixes me with striking grey eyes and says hello in an English accent inflected by the West Coast. The deep, rather posh drawl is catnip for men of a certain age. “Dame Joan,” I say, using her preferred appellation and resisting the urge to drop to one knee. We place ourselves at either end of a sofa and I carefully edge towards her, anxious to get closer without breaching the exclusion zone

It seems prudent to ask about her new film, a bittersweet comedy of which she is justifiably proud. She plays Helen Shelley, a washed-up movie star living in a grim English retirement home. When Shelly learns that the director of her best-known film has died she sets off to France to gatecrash the funeral and land herself a part in a movie that will resuscitate her long-dead career. The funeral will be like the Oscars, she tells Priscilla, the abused wife played by Pauline Collins (no relation) she coerces into accompanying her. “A bit sadder, but not much …”

Helen is a monstrous figure in most respects: delusional, manipulative and utterly selfish. Collins doesn’t try to make her sympathetic, but does imbue her with genuine pathos, deploying what Variety’s critic called her “still lascivious on-screen charisma”

The part fits so well, in fact, I ask if it was written for her. Her answer is characteristically direct. “You’d have to ask [director] Roger Goldby,” she says, “but I doubt it. I expect they imagined someone like Helen Mirren or Susan Sarandon, but luckily it came to me.”

Lucky indeed. Both for Collins, who considers it the best part she’s played since her dual role opposite Steven Berkoff in the 1994 British film Decadence, and for audiences who get to see a performance that’s funny, brave and occasionally unhinged.

In one of the film’s defining moments, Helen stands alone on a beach, stripped of make-up and most of her dignity. She peels off her wig and tosses it into the waves; a gesture of defiance and surrender. It’s powerful and genuinely shocking, given the perfectly groomed image Collins presents to the world.

She acknowledges the scene was difficult, but stripping herself physically and emotionally is part of being an actress. “I’ve done it before,” she says. “But perhaps not in such a mainstream production.”

You can’t be a bitch and play a bitch.

The Time of Their Lives was released in Britain in March and attracted mixed reviews. More than one critic applauded Collins’ performance, but compared the film unfavourably to Shirley Valentine, the 1989 British hit also starring Pauline Collins as a dissatisfied middle-aged housewife who finds romance on the continent.

Collins says she tries to avoid reviews, but she’s a voracious reader, of newspapers in particular, so it’s hard to avoid them. “The thing is people have enjoyed it [the film] and the word-of-mouth has been fantastic. It’s actually gone back into cinemas in the UK because there’s so much interest.

What’s the film’s main message? “I’m not sure if there is one because it’s primarily a feelgood film. But it is saying ‘it’s never too late’.”

Fiction and real life intersect in The Time of Their Lives when Helen walks into a bar and persuades the band to let her sing Who Can I Turn To (When Nobody Needs Me). It was written by Anthony Newley, the English actor and singer, who became Collins’ second husband in 1963. She suggested the ballad after the film’s producers – one of whom is the Oscar-winning lyricist Tim Rice – rejected My Way as too familiar. “As soon as they agreed to use it I thought, ‘Oh no, people are going to ask me about this in interviews.'”

She was right, of course. Collins’ colourful love life has always been a source of fascination. As well as dating actors including Warren Beatty and Terence Stamp, and rebuffing a who’s-who of Hollywood stars including Frank Sinatra, Dean Martin and Richard Burton, she has been married five times (three times less than her friend Elizabeth Taylor, as she likes to say).

She has said her first husband, the Northern Irish actor Maxwell Reed, drugged and raped her when she was 17. She had two children with Newley but the charming Londoner was a serial cheat. Next up was Ron Kass, a “tall, handsome American” who was head of Apple, the Beatles’ production company. They had a daughter, Katy, but after moving to Los Angles, he became heavily addicted to cocaine and squandered the couple’s money.

The last of this bad bunch was Peter Holm, a tall, blond Swede and renowned playboy. Collins describes him as “the smoothest of smooth con-men”. She eventually discovered the blue-eyed former pop star was “screwing everyone in a skirt”.

“I believe that when life gives you lemons you make lemonade,” she says. “And believe me I’ve been given plenty of lemons, even if people aren’t aware of it.”

Her marital history took a sharp turn for the better when she married Percy Gibson, a theatre company manager. She famously dismissed the age gap with the quip: “If he dies, he dies.” Married since 2002 they remain inseparable; partners as well as best friends.

Of her first four marriages she says simply, “I was abused. Either physically, financially or because they were unfaithful to me.”

Is that why she developed a tough shell? Maybe, she says, but points out she has always been self-reliant and never wanted to be a victim.

That resolve was evident in the early stage of her career. Having made her stage debut at age nine in Ibsen’s A Doll’s House, she joined the roster of actresses at the British entertainment group The Rank Organisation. In 1955, at the age of 22, she headed to Los Angeles after being put under contract by 20th Century Fox.

“I didn’t want to go,” she says. “I was happy living with my family in London [her father, a talent agent, was her manager at the time] and the Hollywood studio was offering about $350 a week. I knew that they would have a large roster of young actresses on the same money and I wouldn’t stand out.” Collins held out for a better deal and got it – the first example of a gutsy determination that has defined her career.

I suggest two other examples when she dug her stilettos in when it might have been easier to walk away. In the mid-’90s she refused to return a $1.2 million advance for two novels after the publisher Random declared her manuscripts “unreadable” and sued. Collins stood firm, the judge found in her favour and she walked away with $1 million.

She showed similar resolve in the heyday of Dynasty after learning that the show’s male star, John Forsythe, was being paid considerably more than her. Collins marched into producer Aaron Spelling’s office and demanded parity. He refused saying, “I can’t do that: you’re an actress and he’s an actor.” She went on strike and the producers buckled. “I stuck to my guns and got a raise. But I never got as much as John.”

I tell her that the American actress Robin Wright is investigating whether Kevin Spacey, her House of Cards co-star, is paid more than her. Is she surprised actresses are still fighting this battle? “Yes,” she says quietly. “Yes I am.”

We’re running out of time: an enormous black limousine is waiting downstairs to whisk her back to her house in Belgravia. Her admiration for Margaret Thatcher is well known, so I ask her opinion of Theresa May, Britain’s embattled Prime Minister. “Oh, I think she’s great,” she says without hesitation. “And I really like the way she dresses.”

She realises she has strayed into politics, a topic that has got her into hot water in the past. “Stand by for the hate mail,” she says theatrically. But her smile suggests a bit of controversy doesn’t worry her in the least.

The Time of Their Lives screens from August 10.