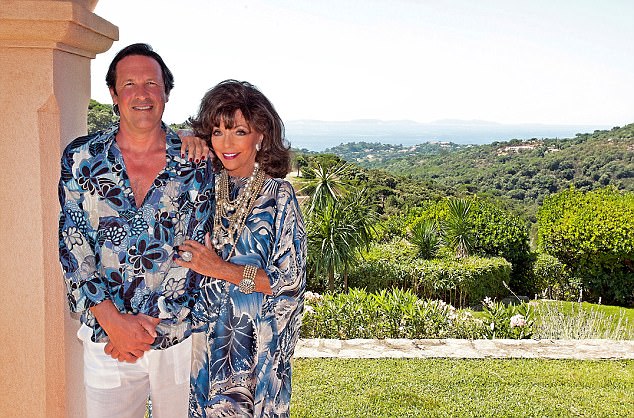 I survived the Blitz so this was nothing, darling! An indomitable DAME JOAN COLLINS on her London home being wrecked by flooding just weeks before her French villa was engulfed by fire

Feeling sorry for myself — as anyone who knows me will attest — is quite simply something I never do. That’s why those who suggest that 2017 is becoming my very own ‘annus horribilis’ could not be more wide of the mark.

I would never dream of comparing my past seven months to the catalogue of misery endured by the Queen in 1992 in which she saw three of her children’s marriages collapse and her beloved Windsor Castle go up in flames.

Although, after a series of varying domestic disasters, I am beginning to wonder what the rest of the year will bring.

As living arrangements go, I didn’t think mine could get much worse. But the past few days have proved me wrong. 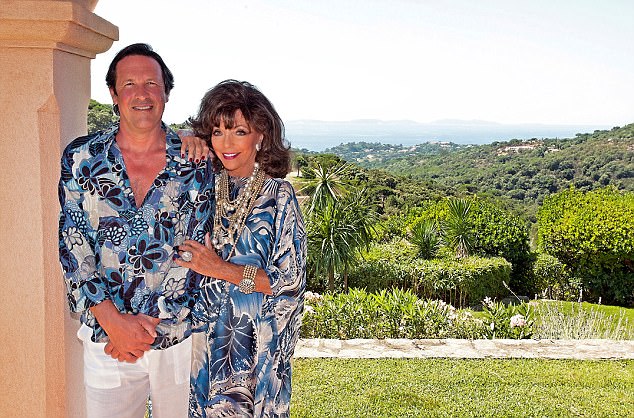 The year started badly enough when, while in LA this January, my brother Bill called to say there had been a massive flood in a neighbour’s apartment and the ceiling had collapsed in our London flat.

Returning two days later, my husband Percy and I were faced with a scene of utter devastation. Our sitting room, dining room and hallway — plus all the carpets, curtains and the great deal of furniture these rooms contained — had been completely ruined. The place was a disaster zone.

Our builder Andy broke the news that restoration was impossible while we were living there, so we were forced to move into an empty rented flat with most of our worldly possessions. Suffice to say, difficult days ensued.

And so it was with a sense of great anticipation that we decided to leave our London flood zone and take a quiet ten-day family holiday in the refuge of our villa in the forest above Saint Tropez. 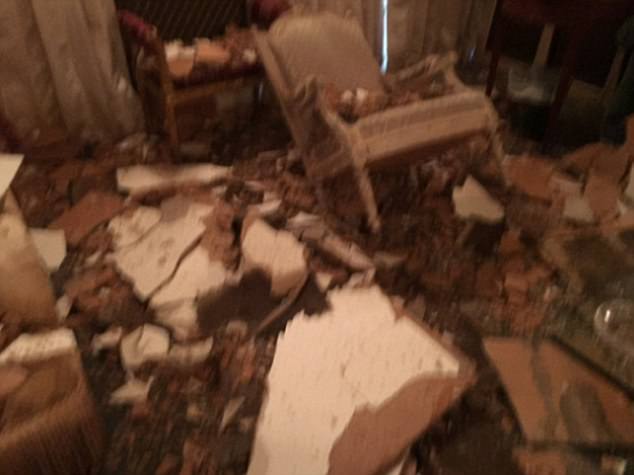 Our party of nine — Percy and I invited my daughter Tara, her husband Nick, Tara’s 18-year-old daughter Miel and her boyfriend Ernie, Tara’s son Weston, his friend Theo and our close friend from New York, Jack Rich — thought we would enjoy some restful days away. How wrong we were.

Soon after arriving, a massive mistral, the strong north-westerly wind that blows from southern France, kicked off around us. The winds blew mercilessly, bringing with them an unbearably hot Saharan aridity.

In these parts, the mistral has such an effect on people it’s said that a man who murders his wife during one will not be charged on account of a fleeting mental state known as ‘mistral madness’.

Dreams of relaxation quickly disappeared. It was impossible to sit by the pool because you would not only roast from the sun but the wind would suck up whatever moisture remained on your body.

The pool furniture and umbrellas were being buffeted about — often ending up in the water — and the doors and windows kept slamming, frightening the living daylights out of all of us.

Everyone pretty much stayed inside and the images we had of lazy days frolicking about the pool were dashed like cases of rosé wine falling off a truck.

Determined to make the best of it — after all, I was surrounded by my loved ones and the ceiling hadn’t fallen in — we took to indoor life with gusto.

On Monday, we had just had an afternoon game of charades and celebrated with pink champagne and delicious lasagne prepared by our villa staff, 21-year-olds Hannah and Annelies, when we noticed several helicopters and planes circling overhead.

‘Those look like fire planes,’ said Percy. ‘I’ll drive up the hill and take a look.’ No sooner had he left than Tara, pointing at a plume just over our hill, said: ‘Isn’t that smoke?’ Grabbing the binoculars, I ran outside and saw, to my horror, huge columns of smoke and flashes of fire.

I immediately thought of the recent fires in Portugal where fleeing cars had been trapped and consumed by flames. 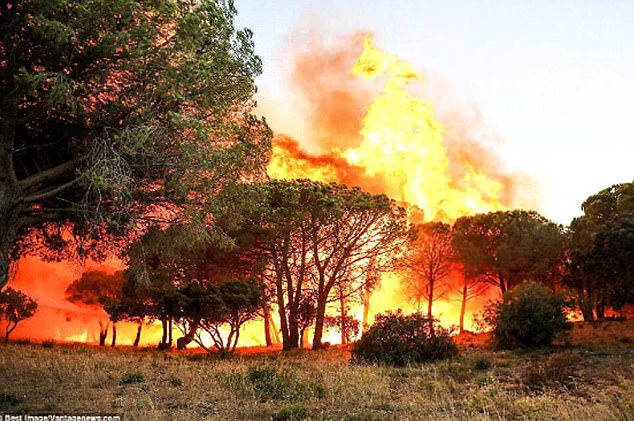 We stood rooted to the spot, watching the smoke stack become bigger and wider, like the cloud from an atom bomb.

Then the phone rang. It was Percy. ‘I don’t want you to panic,’ he said. ‘But tell everyone to grab their passports and valuables, put on sensible clothes and get in the cars NOW. I’m on my way back.’

One doesn’t expect to require Blitz spirit on the French Riveria, but my Blitz baby mentality kicked in. Although I was too young to be fully aware of how much danger we were in back then, I recalled the nights of being woken up, jumping feverishly into my siren suit and going down into the air raid shelters during the bombings.

Not having a siren suit to hand, I hastily donned combat gear — tracksuit bottoms, baseball cap, an old cardigan the moths had dined on for several years, and threw a few ‘essentials’ into a bag. Only later when I unpacked did I realise that, other than a T-shirt, my ‘essentials’ consisted of three pairs of sunglasses, two paperback books and a fan.

A fan! Like I needed one to fan even more flames!

I’d never seen so many people move so quickly with utterly grim fixed expressions, which thinly veiled sheer panic. I felt particularly keenly for my daughter Tara, who has been trapped in bad fires twice already in her life.

Eleven terrified people — family, friends and our villa staff — mobilised to cram themselves into two small cars and escape. As we drove up the hill, wHannah and Annelies, along with the two youngest boys and our friend Jack, had taken off practically the moment I had hung up the phone from Percy, so we’d lost touch with them.

Thirteen-year-old Theo, in the back of the car, suggested he call his mother, whereupon Jack, with customary New York composure, retorted: ‘And say what? That you are in the back of a car running from a raging fire? Call her after you’re safe.’

Spectators lined the narrow road taking pictures, making navigation on the two-way street difficult, but we persevered, determined to meet up.

Driving out away from the flames, we stopped at a small petrol station and decided to fill up the car. I went into the shop to buy some water for everyone and met a Dutch man from Gigaro, the town where the fire had started. He was in shorts and a shirt and said that the fire had been so close to their house they didn’t even have time to grab anything.

‘It is very bad and it’s spreading,’ he said. The shop-owner gave a Gallic shrug and said in French that everything would be OK and it would not be a big problem.

Dutch man’s hair. The shop-owner attempted another Gallic shrug, but it stalled halfway.

After some frantic phone calls, both parties were finally reunited in the coastal town of Sainte-Maxime, a 25-minute drive north of Saint Tropez, outside another bleak petrol station, watching the flames leaping up across the bay.

I sat in the back of the car quaffing a much-needed bottle of water while everyone got out and huddled together to make onward plans. I attempted to join them but when I reached for the door handles they wouldn’t open. I remembered they were child-proofed so couldn’t be opened from the inside.

I had given my phone to Percy, so I banged on the windows with my empty water bottle and yelled at the top of my lungs, but the group outside was oblivious to my plight for what seemed like ages.

It’s truly astonishing how long six minutes can feel like if you’re trapped in the darkness of a boiling hot car.

Finally, my grandson Weston noticed my exertions and came to my rescue with a wry smile. ‘What are you doing back there?’ he asked with a twinkle. Indeed, the youngsters were impressive in their composure.

Granddaughter Miel walked around the group sweetly dispensing hugs and reassuring everyone that, ‘It will be all right’. Boyfriend Ernie kept hugging her, while Theo, on his first trip abroad, finally got to call his mother.

Percy and Tara were on their phones trying to find a place to stay but — owing to the fact that so many other people were also escaping the inferno and it was the high season — their efforts were initially in vain.

I called my friends Susie and Warren Todd, who had a villa nearby. They immediately offered us three guest rooms.

By this time Tara had also managed to find two rooms in a local hotel. She and her family were whisked away and we headed to our billet.

The fire continued to rage on, as efforts to contain it were hampered by darkness. Percy drove through various checkpoints where police and firemen remained vigilant and helpful through the night, herding terrified evacuees through chaos to safety.

The organisation of the French forces was extraordinary. In all, 12,000 people were relocated safely without one loss of life, while more than 4,000 brave firemen and gendarmes, dozens of whom were injured, fought several wildfires over a vast area.

I don’t think there is anything scarier than being trapped in a fire. Like a herd of bison careering down a hill, it’s unpredictable, spreads with terrifying alacrity and consumes everything in its wake.

Tara texted later to say that they were the last people to get a room because there were several homeless families sleeping in the hotel lobby.

Many were far less lucky and had fewer resources than I do, so I feel incredibly grateful.

We made it back to our villa the following day to find the fires hadn’t caused any damage. It was a miracle, really, as the flames were so close that any change in wind direction would have brought them charging up to us within minutes. Again, I thanked my lucky stars.

But my deepest gratitude goes to the brave French heroes who, like our own wonderful firefighters and policemen, plunge headlong daily into danger to keep us safe.

Even as I write, there are still several small fires burning and the winds are picking up. The fire-fighters, exhausted from having been at it in searing temperatures for four days straight, have yet to unburden themselves of their heavy gear. Courage, mes amis!

For if there’s anything to take from my year of flood and fire, it’s surely the exhortation to be found within that old and trusted proverb: ‘Fortune favours the brave.’

I just hope my own little Book of Revelations ends here!