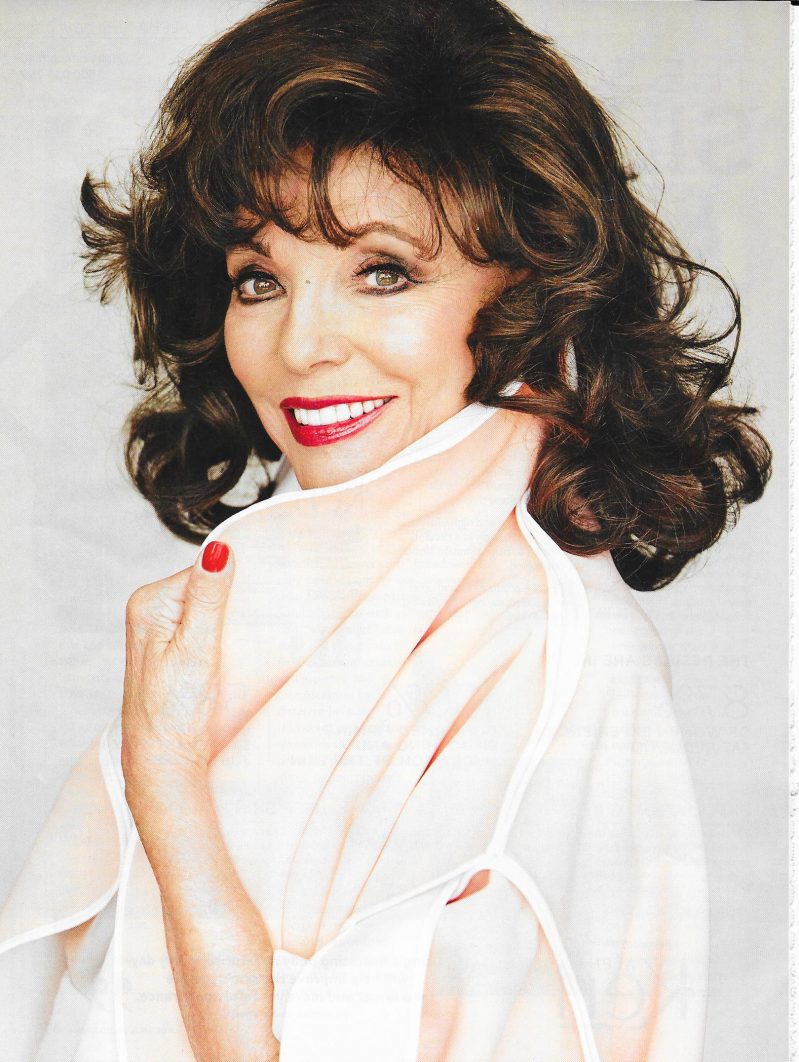 The Time Of Their Lives’ Joan Collins: I’m quite relaxed

AFTER 70 years in showbiz, Joan Collins still oozes star quality. Here, she talks to our reporter about dressing down for her latest movie. 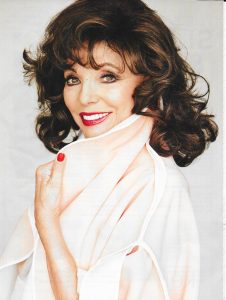 It’s no understatement to say Joan Collins is not having the greatest of days. She is jet-lagged after flying back from Los Angeles the previous day, a leak in the apartment above has brought her ceiling crashing to the floor, destroying her beloved London home in the process, and 20 minutes before our scheduled time together I am advised all the stress has brought on a crippling cluster headache.Under these circumstances most celebrities would have brought the day to a premature close. But not Dame Joan. A consummate professional, she hasn’t survived in the fickle world of showbusiness for the best part of 70 years without toughing it out when duty calls.
She emerges from the bedroom and into the lounge of her London hotel suite to greet me with a warm smile. She’s wearing no more make-up than an average woman, but looks 20 years younger.She’s neatly petite and shorter than her big screen presence would suggest, but elevated by a pair of wedged heels. She offers me a handshake and we sink into two sofas opposite each other. Her stare is penetrating, but not intimidating.

The actress is here to promote her latest film, The Time Of Their Lives, in which she plays Helen, a washed-up actress living in a nursing home. She’s desperate for one last shot at fame so she ropes in a stranger (played by Pauline Collins) to assist. 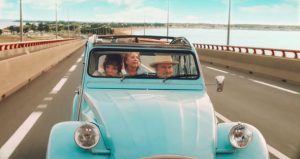 Joan’s appearance in this feel-good comedy drama is a far cry from the glamorous image we have become accustomed to seeing.

“I think it shows a different side to me as an actor,” she says. “I don’t think people have ever seen me walking around in grey, baggy socks, an old raincoat, a plastic hat and with a fag hanging out of my mouth before.

“The only parallels between Helen and I are that we’re both actresses from a certain era, but she’s had a miserable life and I’ve had a great one. She was Hollywood’s bad girl who went off the rails. She didn’t get married, she didn’t have children and her career was over by the time she was 27.

I know people like her who have burned out quite quickly.”

One of the film’s most memorable moments sees Helen removing her wig and wiping the make-up from her face. Seeing the actress’s face completely bare is a revelation. 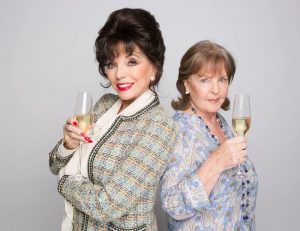 “I don’t look that bad do I? I’m not a vampire,” Joan jokes. “I suppose people are used to seeing me dressed up, but at home I’m quite relaxed and very comfortable in my bathrobe or my sweats.

“However, in the film I loved scrubbing off the face and getting down to the real person underneath. We used extra hairpins for dramatic effect so I could throw them into the sink, but we didn’t have time to take the false eyelashes off.

It was a horrible wig, though. We lost one of them in the sea and then 15 minutes later it turned up further down the beach – even the ocean didn’t want it.”

Born Joan Henrietta Collins in 1933 in west London, she made her stage debut as a confident nine year old. She trained at RADA and upon graduating found herself quickly snapped up by the Rank Organisation and made a string of successful comedies.

“When the film industry started, most movies were built around the actor or actress,” she explains. “People like Bette Davis, Lana Turner, Hedy Lamarr and Clark Gable were massive stars and there was a huge market for fans of a particular actor, even when that film wasn’t good.

Today, we have to fit in with the film.”

An ongoing criticism of the entertainment industry is that it is still weighted more towards men than women when it comes to earnings.

In a recent speech about her own 34-year career in showbusiness, Madonna referred to the sexism and misogyny she still faces.

“All women can relate to sexism, it’s not just in showbusiness – you can be a shop assistant or a secretary,” Joan says. “It’s a fact of life that we have to deal with. 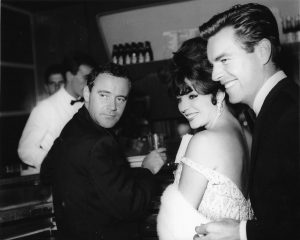 “I know women are fighting, screaming and yelling to be treated equally. I’m not a fighter in that respect, but I will try to get what I feel I deserve. But I still come across older men who ask me what have I been doing lately and I’ll say, ‘I’ve just had a book out and a movie’ and they’ll reply, ‘Well done, little lady.’

“I was never allowed to make more money than John Forsythe [Blake Carrington] when we were in Dynasty. I say this objectively, but I was definitely more popular than he was. However, he had to get certain thousands of dollars more than me.

I didn’t bite my tongue about that, in fact I made a lot of jokes about it. I had a bit of resentment, but not a lot because it’s kind of useless. It was just the way our producer Aaron Spelling expected it. John was a man and even though I became a bigger star than him, John had to get more money.”

It was Dynasty that made Joan a household name for a generation growing up in the 1980s. Flagging ratings had meant the soap was facing the axe until producer Aaron Spelling brought in his old friend to play Blake Carrington’s former wife, Alexis. A combination of glamour, wit and razor-sharp delivery of cutting one-liners made her the biggest bitch on the box – and saved the show.

“Talk about a misogynist, well, John didn’t like me at all,” she continues. “He didn’t speak to me once for a whole season. When the cast was given the People’s Choice award, we all trooped up on stage and the starlet who was handing out the award gave it to me. John was standing next to me. I said, ‘Thank you very much, now I’ll hand it to our fearless leader.’ He replied, ‘She’s said enough’ and that was it. Backstage he even refused to hold the award for photographs.”

Even before Dynasty, Joan had never been afraid of pushing the boundaries, most notably in her role as Fontaine Khaled in box-office hits The Stud and The Bitch. Both films were adaptations of the bestselling novels written by her sister, Jackie Collins, who died 18 months ago following a long battle with breast cancer.

I inquire if I can ask her a couple of questions about her sister. Joan nods, but for the first time in our interview she quietens, her grief visibly raw. 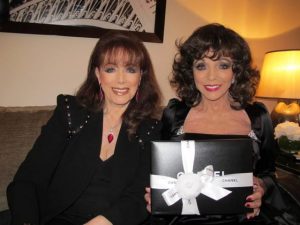 “Tragic,” she replies, averting her eyes and looking towards the window. “It’s totally unexpected and it’s horrible. I shared the grief with my brother, her three daughters and six grandchildren and it was a very, very upsetting time in my life.”

Her eyes come back to mine. “That’s three questions,” she says politely but firmly.

One person to offer her support was husband Percy Gibson. The couple worked together to get funding for The Time Of Their Lives and last month they celebrated their 15th wedding anniversary. It’s her fifth marriage and she believes she has found the recipe for success. 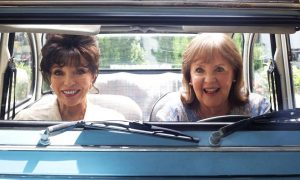 “The secret to making a relationship work is friendship, mutual respect, making each other laugh and love,” she says. Do they still buy each other anniversary gifts? “Yes and I’m covered in them.” She points to her necklaces and jangles the bracelets on her arm: “I’m easy to buy for – just buy me another bracelet and I’m happy.

“But I also collect camels. Not real ones, of course. Pictures, ornaments, mugs, paintings –when I first went to Hollywood I saw my first palm tree and I thought it was the most beautiful tree I’d ever seen so I started collecting things with palms on. Then someone came along with camels and I thought I liked them better than palm trees. I like their ugliness.

They have a strange beauty. Things with camels on are harder to find but now I have a whole heap all over the place. I’ve ridden on the back of one in Egypt, but it wasn’t a very comfortable experience.

I have some camel mugs but no one is allowed to drink out of them but me.”

Joan and Percy like to travel and spend time with their friends. “Not all my friends are in showbusiness, though,” she points out. “They’re in fashion, décor and writing. I’m attracted to people with a sense of humour and a personality like mine.”

And while she uses Twitter, she found even being a Dame Commander of the Most Excellent Order of the British Empire wasn’t enough to stop her from being trolled: “I no longer do anything that can be remotely taken out of context after once praising some politician’s speech and getting trolled.

After that I thought this isn’t worth it. Now I’m a boring tweeter and just post pictures of views and my friends.”

I finish our afternoon by asking how, as an actress, producer, businesswoman, author, mother and grandmother, she might sum herself up to someone who has never heard of her.

“I can’t put my finger on what I’m like,” she confesses after giving the question some thought. “I’m a chameleon. I’m a Gemini and we have many different sides. So I can’t say I’m one thing over another. But I think I’m a kind, good person. And I can be a lot of fun.”

The Time Of Their Lives is in cinemas on Friday.