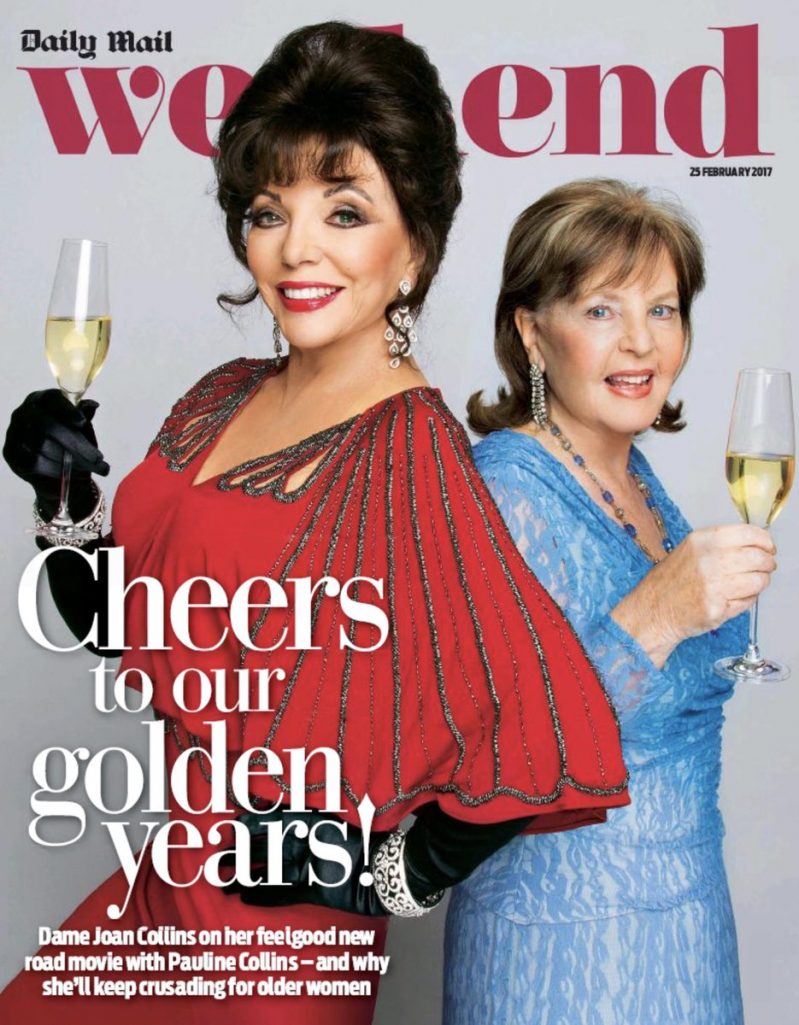 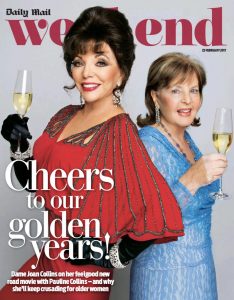 As Joan Collins,returns to the big screen in a bittersweet British road movie she reveals why she’s flying the flag for older women – and says she’s not finished yet

Dame Joan Collins says prepare for a shock – we’re about to see her as she’s never been seen before.

Gone are the carefully applied cosmetics, the immaculately coiffed hair and the stylish clothes.

Instead we see a faded Hollywood actress dressed in an unglamorous old raincoat and socks, who in one poignant scene wipes off her messy make-up and tosses her wig into the sea.

It happens in her new film, The Time Of Their Lives, a British-made comedy road movie that teams Joan as washed-up screen siren Helen with Pauline Collins as Priscilla, an unhappily married housewife who helps Helen escape from her London retirement home and set off to her ex-lover’s funeral in France.

Helen’s trying to relive her glory days in the 60s when she was a famous actress,’ explains Joan.

‘But of course she can’t. Her make-up is pretty bad and her wig is terrible. She can only see a bleak future for herself and she’s contemplating suicide. I have to admit, I look hideous at times because it’s meant to show the sadness of the person Helen’s become.

‘What happened to her during her Hollywood years made her bitter, and she went off the rails. She drank, got into drugs and had too many men, but she’s never been married. Not like me! She eventually ends up a bit like Jayne Mansfield singing in tacky clubs.’

Joan, the veteran of some 65 films, is now 83, and I suggest it was a brave move to take on the role when we meet over lunch.

‘No, it’s not particularly brave,’ she says. ‘Being brave is jumping into the sea to wrestle with sharks. Taking off my make-up isn’t.’

Having met every major movie star since she herself first arrived in Hollywood in her early twenties, did she base Helen on someone she’d known? 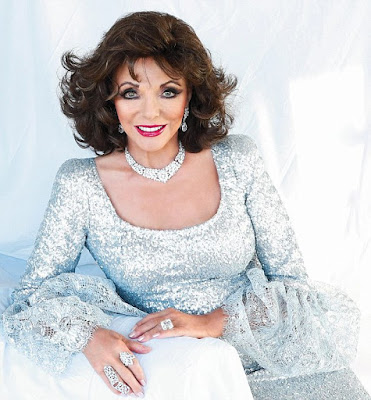 .‘It was loosely a mixture of Debbie Reynolds and Elizabeth Taylor. Debbie was a great beauty but she ended up having a tragic life.’

In the film, Helen returns home to England from Hollywood to try to get her damaged hip fixed on the NHS.

‘But it’s still giving her hell. She walks with a limp and uses a stick, and she lives in a horrible retirement home.’

She meets Priscilla in a supermarket, and they become friends. ‘Priscilla’s in a terrible marriage,’ says Joan. ‘She has nothing to look forward to, no children, nothing.’

When Helen reads that her ex-lover, a famous Hollywood director, has died she decides she must get to the funeral in the beautiful French resort of Ile de Ré.

She realises the service will be attended by lots of film executives she once knew and sees it as her last chance of getting back into movies. Helen is of course deluding herself, but Priscilla, drawn in by Helen’s glamour, agrees to make the journey with her.

‘And that’s what’s so good. We escape. We then bond. Even though my character is a bitter, twisted, rather nasty kind of person on the outside, underneath there’s a sweet person to be found.’

After the little car they’ve stolen runs out of petrol in a remote French forest, they’re rescued by Alberto, a reclusive millionaire who lives nearby. Alberto (played by Italian film star Franco Nero) drives them back to his magnificent home and invites them to stay the night.

‘Both women fancy him,’ says Joan. ‘Helen thinks he can rekindle her life, that this rich man might be interested in her, but to her amazement and profound disappointment he prefers Priscilla. This comes as a bit of a shock. So there’s an element of competition between the two women.’ 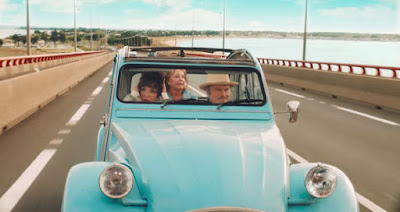 It was Joan who suggested Pauline for the role after reading the script. ‘One person who absolutely jumped out at me from the pages was Pauline Collins, who I admire tremendously as an actress.

‘How many other movies are there today with two great women’s roles? I thought it was a bit like Thelma & Louise, but the next generation. Except we don’t drive off a cliff like they did at the end. We walk along the shore, with the possibility of doing a sequel.’

The film has been five years in the making, with Joan’s box-office power raising most of the money for it, and she, her husband Percy Gibson and Tim Rice are all executive produJoan has another surprise for us in the film. In one nightclub scene she sings unaccompanied. ‘When we were talking about what Helen should sing, I suggested Frank Sinatra’s My Way but everyone said it had been done too often.

‘They wanted something to show Helen’s hurt and need, so then I said, “What about Who Can I Turn To?” which happens to have been written by my ex-husband Anthony Newley. They all agreed. In fact, Tim Rice jumped up and down and said it was perfect.’

It was Joan who persuaded Franco Nero to join the cast – he has to do a full frontal nude scene while swimming.

‘I’ve known him since he starred as Lancelot in the movie version of Camelot in 1967 when he was going out with Vanessa Redgrave.’

In The Time Of Their Lives Vanessa’s daughter Joely Richardson plays Lucy, the film director’s widow who’s organising the funeral that Helen gatecrashes, causing an ugly scene between the two of them.

Michael Brandon, another old friend, plays Hollywood film producer Harry Scheider. ‘So all of us together were like a family,’ says Joan.

‘It’s such a feelgood movie. And darling, the movies this year are so depressing except for La La Land, which I love. I think they’re making two kinds of film in Hollywood now. Serious movies about sad people, or blockbusters with lots of spin-offs. They’re certainly not making films for women like they used to.

‘You know, Bette Davis, Joan Crawford and Lana Turner were all up there in the 40s, 50s and 60s. And they played women of their own age. It’s cruel now because they’re not interested in getting a 52-year-old actress to play opposite a 53-year-old actor. They get a 27-year-old instead. The only exception is Meryl Streep, who’s an amazing actress.

‘OK, in this movie Helen and Priscilla are old, but I don’t think it really matters because you see how they meet and their utter despair at the beginning. Then after getting together they have amazing adventures,’ says Joan.

Isn’t it true, though, that a lot of today’s young stars don’t have the magic or the lasting appeal of those older stars? ‘This is because they don’t have the studio system behind them any more,’ says Joan.

‘Joan Crawford and Bette Davis had the studios behind them and would do two or three movies a year. The audiences went to see the star, rather than the movie. Now it’s the movie rather than the star.

‘Actresses have to be so thin today. Marilyn Monroe probably wouldn’t get a look in, which is hard to imagine. But that’s how much it’s changed.’

In the film, Helen warns of the dangers of fame. ‘Unless you have your head screwed on tight and have had a good upbringing, with parents who have grounded you, fame can be one of the most destructive things that can happen to you,’ says Joan.

‘And it can happen to people who seem to have everything. The drugs. So many problems. Too many people have died through drugs.’

How did she manage to resist when others fell into the trap of being pressurised by the company they were in?

‘First of all, I once took cocaine and I didn’t like what it did to me. That was it,’ she says.

‘I was with Natalie Wood in St Tropez having a girls’ week. We went to this discotheque and Natalie and I made a pact not to leave each other’s side because there were a lot of attractive Italian guys there.

‘One of them told me to try a little, and the next thing I knew there was nobody I knew in the club, except for one of the Italian guys. Natalie had gone and I couldn’t remember what had happened in the previous five hours. I said to the Italian, “What have I done?”

Anyway, I finally got a taxi and went home at 5am. Natalie had walked out on me the next morning when I woke up. A note pushed under my door said, “Where were you? You left me, we were supposed to stick together.”

‘We didn’t talk to each other for a few years. She was annoyed at me and I was annoyed at her. That was down to the cocaine. And it’s why I’ve never touched cocaine or any drug since. The number of times I was offered drugs in Hollywood and I refused.’

Despite leading such a glamorous life, Joan has somehow managed to keep her high heels firmly on the ground. So what’s been her secret when other stars have fallen by the wayside?

She puts some of it down to having been a wartime evacuee. ‘At the age of six or seven I had to get used to being sent off to the safety of some country house where the loo was at the bottom of the garden and the lavatory paper was torn-up newspaper stuck on a nail.

‘I had to stay there while London was being blitzed until Daddy said it was safe to come back home. Then the bombs would start up again and I’d be sent away somewhere else.

‘I had to do this at least six times. I went to 13 different schools, and at each one I had to make new friends. I had to be strong because sometimes the girls would be very mean because we were London girls. 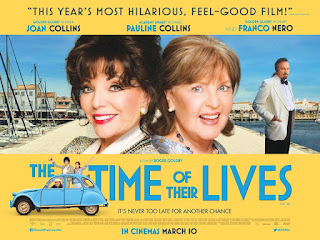 ‘But I’ve always had my feet on the ground and I think it’s because of Daddy [Joe Collins, a successful showbusiness agent]. When I was voted the most beautiful girl in England at l8 I remember my father being asked what he thought.

‘He just said, “I’m amazed. She’s a nice little girl but nothing special.” He never gave me an inflated idea of my own importance. He was pragmatic. He knew showbusiness was tough and there was so much rejection so he wanted me to become a secretary rather than an actress, preferably find a nice man and get married.

‘But I had the acting bug. And I was so lucky, I know that. How many girls do you know who at the age of 20 have already been under contract and made eight English films, get discovered and sent off to Hollywood, where they’re doing movies with Bette Davis, Paul Newman, Gregory Peck, Bing Crosby, Bob Hope, Frank Sinatra, Gene Kelly, Rock Hudson and Burt Lancaster?’

Joan is forever being complimented on how amazing she looks for her age. She’s always believed in exercise – she has a personal trainer – always taken care of her skin, and avoided cosmetic surgery.

‘I’ve just relied on make-up and lots of face creams, oils and serums.’ She will allow her body to tan, but never puts those high cheekbones in the scorching sunlight while at her villa overlooking St Tropez.

The limo with its tinted windows arrives at the restaurant to take her home. So how does she feel about life now? ‘Optimistic,’ she says. ‘You haven’t seen the last of me.’