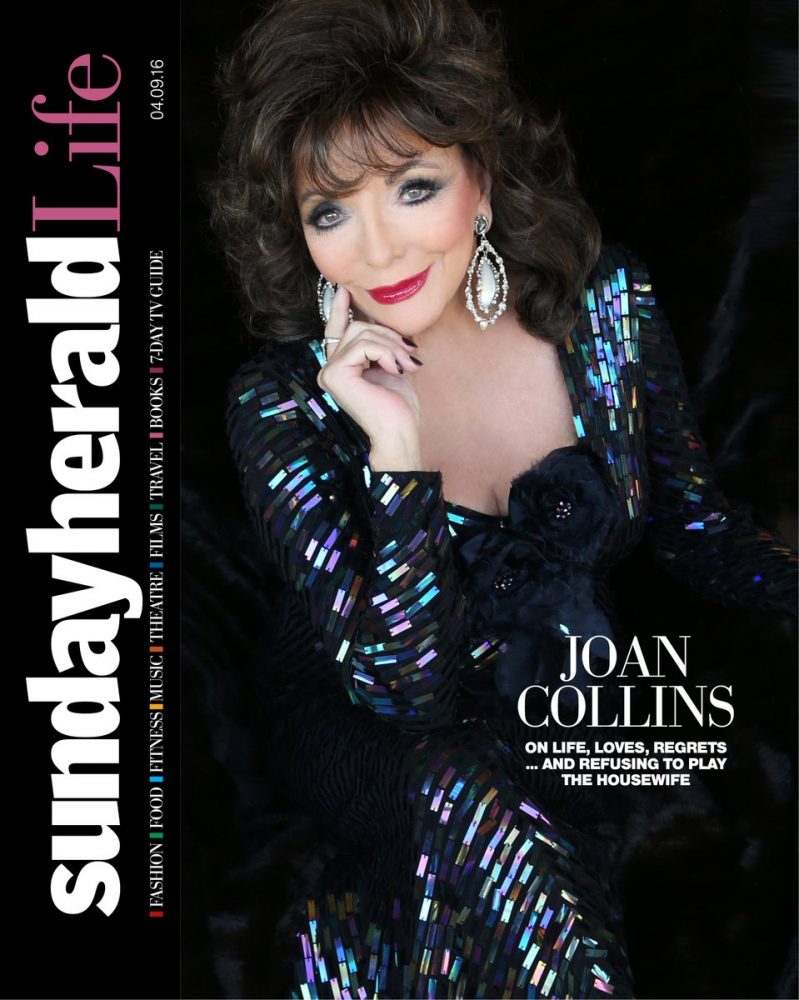 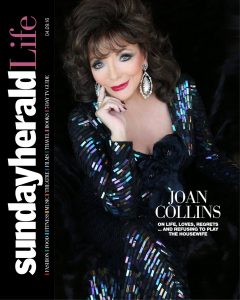 Joan Collins is giving me heart palpitations, and not for the first time.
Sadly, this time the effect is very different from the one she had on the hormonal schoolboy who stared at the grass-skirted stunner slinking across white sands in 1957 movie, Our Girl Friday.

The acting legend is speaking from her home in the south of France, but there’s a lightning storm playing out.

And with every crack of thunder the line goes dead. Now, the idea of interviewing the lady who played Alexis Carrington already incites a little trepidation (Dame Joan reputedly doesn’t suffer fools, and indeed why should she?)

But if the essence of a good interview with a celebrity icon is about establishing rapport, then  chances here are about the same size as the bikini she wore in Girl Friday.

And there’s a little question of how to address her. Does she wish to be Dame Joan, the title she earned last year for services to charity? Or can we kick off with Christian names?

“You can call me Joan,” she says in soft, but clipped tones, perhaps a remnant from her RADA days.

And she’s immediately warm, perhaps helped by having a friend in common, or her Scottish connection, given Percy Gibson, her (“fifth and final”) husband is half Scots, with a cousin in Glasgow.

But then the line disappears. Drat. Will she slide off for a morning coffee?

This interview is to promote the only Scottish theatre date of Joan Collins Unscripted, a variety fare in which she will take questions from the audience, appearing alongside her husband.

But the lady doesn’t really have to sell tickets, given they are flying out of the box office. Thankfully, she calls back. And the line cuts out again. More anxious dialing. We’re reconnected. But are we?

Try an easy question. Could there be a risk, Joan, in taking questions from a nosy, cheeky Scots audience? You can just imagine them asking, ‘What was it like to date Warren Beatty?’ Or even, ‘Why were you a Brexiteer, Dame Joan?’

“I wouldn’t be doing it if I were trepidatious,” she says, in the confident voice of a woman who once had to contend with sexual advances from aged Hollywood moguls.

“It’s unscripted, so I will go out there on stage with Percy and we will wing it. But the questions will be based on certain subject categories; Hollywood, Dynasty, Health and Beauty… that sort of thing. It should be fun.” Dame Joan adds laughing; “I certainly like a challenge.”

She certainly does. Ms Collins was never likely to settle for a life more ordinary. Growing up in London the granddaughter of stage performers and daughter of a showbiz agent, acting life was inevitable.

Even when she played a nun in the 1957 movie Sea Wife, Collins looked hotter than the Jamaican beaches where the movie was filmed.
There were darker times, of course.

However, there seems to be a running thread in Dame Joan’s love life in that she tried exceptionally hard to make her marriages work. Is this connected to her relationship with her father, Joe Collins, a showbiz agent who continually told the teenage Joan she’d never make anything of herself?

“You have to understand I was brought up in a generation where women were subservient towards men,” she explains.

“I remember when I was 18 and under contract with Rank (Pictures) and I did a magazine interview. One of the questions I was asked was, ‘How are you going to do all the cooking and cleaning in your home?’ I replied, ‘Well, I won’t do any cooking or cleaning, I’ll be at the studios for 12 hours a day.’

Well, the headline appeared, and I will never forget it because it ran, ‘I Will Do No Cooking and Cleaning says Joan, who is not a real woman’. Can you believe it? I was castigated because I chose my own path in life and showed I wouldn’t kowtow to any man.”

Dame Joan reveals with real delight in her voice she has just finished filming a role that’s allowed her to scrub down. The Time of Their Lives, co-starring Pauline Collins, is a Thelma and Louise type romp.

“I play a washed-up actress who escapes from a retirement home,” she says excitedly. “I was so pleased to get this role, because I feel I’ve so often been passed up for roles because of the way I look.”

Meanwhile, Dallas star Linda Gray has announced she is going into Channel 4 soap Hollyoaks. Would Ms Collins consider a British soap? “Well, the producers offered it to me about three weeks ago,” she reveals of the role.

“I said no. Between the movie and the new show I wouldn’t have the time for anything else.”

Joan Collins, however, doesn’t concern herself with the roles that could have been.

“Really I don’t have regrets. Life is too short to be moaning about something that could have happened.”

Does she believe her attitude of embracing every new day with a tight hug has given her longevity?. “I think so. But I think genes have a lot to do with it.

“My sister, up until the day she died (Jackie Collins passed away in September last year) looked very young.” The actress’s soft voice betrays her emotion. “I’m really sad about the death of my sister. It’s still so sad. I miss her every day. And I have pictures of her all over the house.”

She adds: “There is so much tragedy in the world I think its up to those who have a good life to enjoy it.”

Indeed. Does she feel she had to go through the incredible journey, the challenges, the disappointments, before she found real happiness with Percy, her Peruvian-born soul mate, with whom she laughs continually?

“I don’t know the answer to that,” she says, truthfully.  “What I do know is that life is not a bowl of cherries.”

The Hollywood legend laughs a lot, you discover. And she’s a grafter.

“No one has ever given me anything. And I’ve always paid my taxes,” she maintains, then adds, laughing: “I’ve never even applied for a bus pass.” Good gracious, Joan. We don’t want to see screen legends rummage in big handbags for bus passes. “No!” she laughs.

Sadly, the lighting interruption short-circuited a planned question about whether she still does her party piece, the splits, on stage. Let’s hope so.

But regardless, you just know her theatre show, which she proclaims to be her last, will be a hoot.