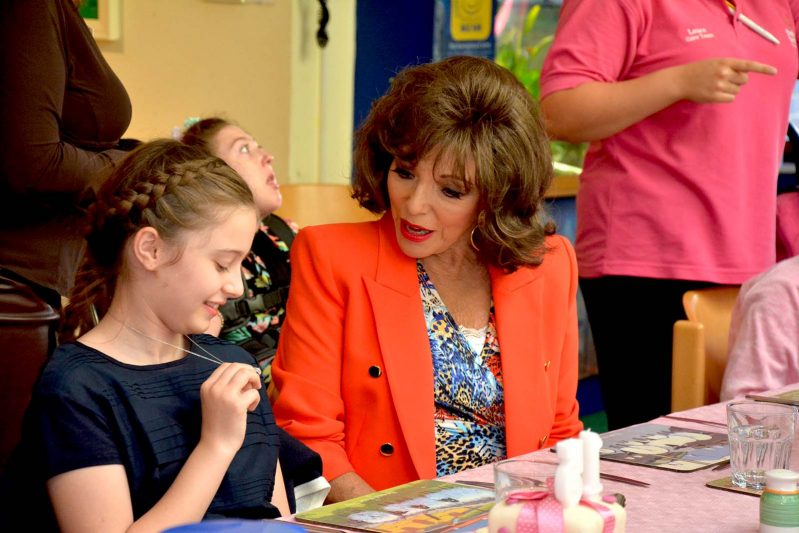 Dame Joan met families supported by the charity, joining them for an early evening meal before cutting a birthday cake to celebrate the hospice’s 15th birthday.

Dame Joan also kindly donated a vast amount of items from her personal wardrobe to our Guildford charity shop, which has caused lots of interest from eager fans and fashion lovers.

Items for sale include an array of clothing, jewellery, hats, swimwear, designer labels and items that Dame Joan has not only worn, but designed herself under her clothing range `Jackie Palmer`.

The shop is running a silent auction for some of the most iconic items which include a Chanel handbag, a pair of Manolo Blahnik shoes, a Tiffany necklace, an Alexander McQueen bracelet, a signed copy of her book, a signed pair of LK Bennett shoes and a pair of earrings worn by Joan on the set of Dynasty.

Karen Sugarman, Director of Fundraising at Shooting Star Chase, said: “It was a pleasure to welcome Dame Joan to Christopher’s and such a thrill to see the delight on the families’ faces as they enjoyed a meal with a Hollywood superstar.

“Dame Joan has been a fantastic supporter of Shooting Star Chase for many years now and is always keen to show her support. Her latest donation to our shops has caused a great buzz and we’ve had enquires from fans all over the country who want to get their hands on one of Dame Joan’s fabulous items. The awareness this brings and the money it raises for the charity is so important in helping us fund our vital care service – we can’t thank Dame Joan enough.”

Dame Joan Collins said: “Arriving at Christopher’s hospice, I was greeted warmly by its caring and charming staff and the colourful and friendly surroundings. It’s so special to spend time with the children and their families. I am honoured to be Patron to Shooting Star Chase whose charitable work really does change the lives of so many children.”