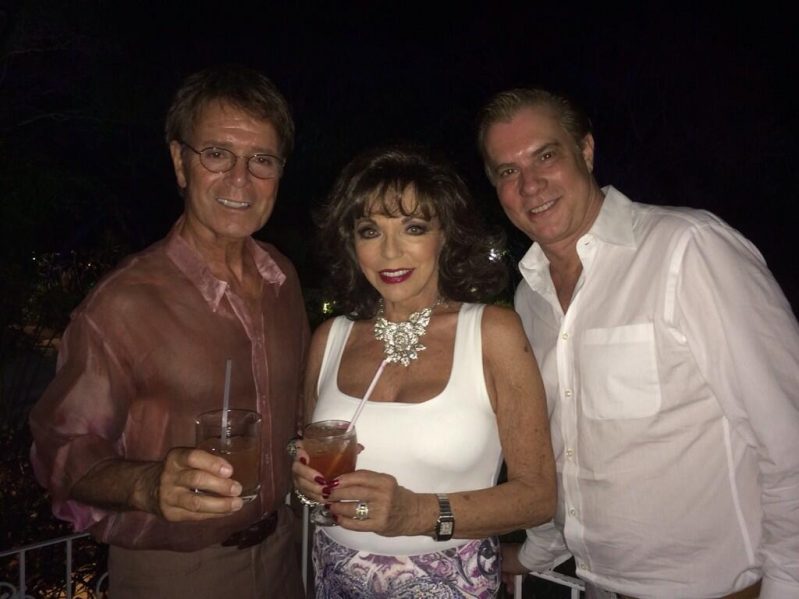 Dame Joan Collins: I miss my sister Jackie every day.. Now I’m there for Cliff, knowing what he went through

As scheming Alexis Colby in the sex and shoulder pads 80s supersoap Dynasty, Joan Collins took no prisoners. Likewise in  movies The Bitch and The Stud, she was not a woman to mess with.
In real life, though? Assertive, definitely. Feisty, for sure. But a bitch, no.
Dame Joan Collins , it turns out, can be a real sweetheart.
Especially if you’re one of her friends, like Sir Cliff Richard , whose sister Donna Goulden died, aged 73, earlier this month .
Joan knows what her old pal is going through. Because it will soon be a year since she lost her younger sister Jackie to breast cancer, aged 77 .

She says: “I miss her every day. We were very close. Obviously it’s been a tough year.”
Joan and Cliff have been friends for more than three decades and she has been by his side through his tragedies.
She says: “He is a lovely, lovely man and a good friend. We went to stay with him in Barbados last year and I’ve known him for over 30 years.”
Sir Cliff, is planning to sue the BBC after the corporation filmed his house being raided by South Yorkshire Police in 2014 .
It was part of a historical sex abuse inquiry which was dropped in June .
When his plans are mentioned, Joan’s feisty side comes out.
“Good,” she says. “When you have a reputation shredded to tatters by particular people, he has every right to take legal action. I hate the way Cliff has been hung out to dry. He never did it.
“I think what happens is when somebody comes to be so loved by the public, like Cliff, some people want to cut them down to size. It’s happened a lot.

“I think celebrities have to be careful where they tread these days. You have to watch what you say because everybody seems to have such a thin skin.”
Sir Cliff has garnered a lot of sympathy since the inquiry was dropped. But Joan’s loyalty stretches to chums who may, perhaps, be less popular.

“What do you think of Biggins?” she asks suddenly.
Christopher Biggins, is a close friend of the actress and was booted off Channel 5’s Celebrity Big Brother after cracking a sick anti-semitic joke . Before I can answer, Joan says: “He is one of my best friends. I feel very sorry for him. He is not nasty.

“He is one of the kindest, most gentle, most charitable human beings who has ever lived.”

Dame Joan, has been a Hollywood star for more than 60 years.

The daughter of a dance teacher and a theatrical agent, she trained at the Royal Academy of Dramatic Art and signed to Rank Studios in 1951 at the age of 17.

Five years later the legendary Hollywood director Howard Hawks chose her for Land Of The Pharaohs, a big-budget epic.

She left England for Hollywood and went on to appear in television shows like Batman and Star Trek as well as making several of those notorious Bitch and Stud movies, based on her sister’s novels.

But her big comeback was playing Alexis the super schemer in Dynasty from 1981-89.

Alexis was a strong female character and Joan has strong views about how women are treated on TV and in the movies.

“I think it is time we stopped defining people by their ages,” she says.

“I think people should be defined by as old as they act, look and feel. I know many women not in showbusiness who absolutely refuse to talk about their ages or tell anybody how old they are. Sadly they are obsessed with it, but with women and not with men.

“Women have to be a lot better at what they do than men because they are judged more severely.

“They are judged not only on their work output but on their appearance and their attitude.

“There was a certain amount of that during Dynasty.

“There was a misogynistic side to some of the producers – an attitude of ‘why should she tell us what to do?’.