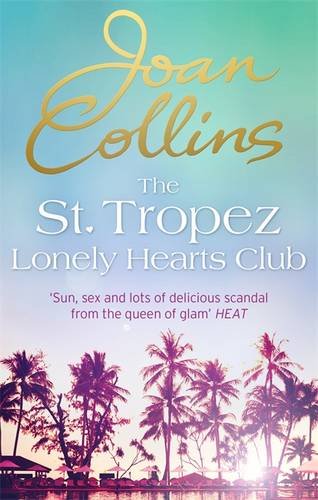 As a prelude to the release of the paperback edition of Joan’s exciting current novel on May 5th, here is an exclusive extract.. Order your copy at the following!

They gathered in the huge open living room in which every surface was covered in glass and goldbric-a-brac and the soft furnishings were made from the skin of nearly extinct animals. 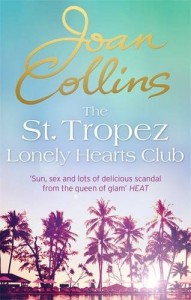 Harry’s sound system was state of the art and soon the CD of Mina’s amazing voice echoed throughout the marble hall and carried down to the beaches. Her first ballad was a thinly disguised tale of her problems with an abusive husband, who got her hooked on coke. It brought tears to everyone’s eyes, except Sophie, whose eyes were boring jealous holes into Mina’s back.

Several classic standards performed in an innovative modern style were greeted with appreciative applause, and then an upbeat eighties disco-style song brought the normally blasé revellers to their feet; in classic Saint-Tropez style they started dancing and waving their arms in the air.

Maximus fancied himself as a cool mover and shaker, and in spite of his bulk, he shook his massive booty in front of a slightly embarrassed Carlotta.

Fabrizio reluctantly pranced with Lara, who always became a total exhibitionist on the dance floor, waving her disastrously bingo-winged arms above her head in a wild yet catastrophic facsimile of a teenybopper and flashing sun-damaged thighs in her sparkly red mini-dress. The seven vodkas she’d consumed added to her lunatic abandonment.

As the music became more frenzied, so did the dancing, and Mina’s golden voice and her strong backing singers even drowned out the relentless sounds of the cicadas.

Then, almost as one, several of the dancing guests bent over, clutching their stomachs in agony. Some of them ran into the garden to vomit into the azaleas, while the other guests watched in horrified amazement.

Running to the onyx swimming pool, he threw up into it, then tumbled in.

Suddenly over half the guests were in paroxysms of pain; those who weren’t tried to assist each other with the help of the waiters who seemed unaffected.

‘Somebody call an ambulance,’ yelled Harry.

‘We need more than one!’ gasped Maximus, through a paroxysm of pain.

Lying on the ground, face up, Britain’s favourite comic, Charlie Chalk, his white face now matching his last name, lay completely still. His Australian lover Spencer cast himself, weeping, on to the vast expanse of his lover’s inert body. ‘Are you alright, darling?’ he wailed. ‘Please don’t die, love.’ As if to set his mind at rest, Charlie let out a loud burp and opened his eyes weakly. ‘Thank God! I couldn’t live without you!’ Spencer started laughing and hugging Charlie’s huge bulk, which made the comedian break some fierce wind.

Half an hour later, a phalanx of ambulances screeched to a halt as the retching and nausea reached a climax, coinciding with the final wailing soprano notes of Mina’s CD.

At least everyone thought it was the final wailing notes of the CD, until Khris noticed that the music system had stopped and what could be heard was Mina herself, wailing in some undetermined location accompanied by a chorus of cicadas.

They started to search, but the young pop star’s injured moans had stopped. Then a paramedic raised the alarm as he discovered Mina sprawled beside a lavender bush. He started frantically administering CPR as the stunned guests rushed down the incline to watch, then he shook his head gravely. ‘I’m afraid she’s gone.’

The assembled partygoers gasped in horror.