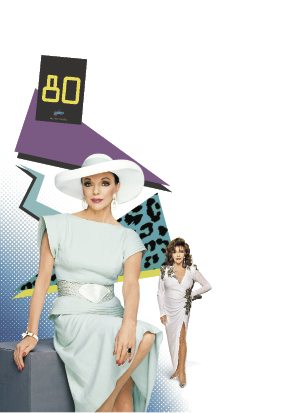 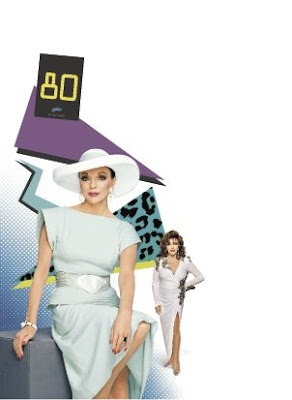 Joan Collins: ” I was often told that when I turned 28 or 30 years, my career would be finished”

The iconic British actress arrives in Chile on Tuesday 29, invited by the Fashion Museum to launch a book about the costumes in the 80’s , closely linked to Collins decade thanks to her role of Alexis in the popular TV series “Dynasty.”

Joan Collins  comments on the fact of her status as  icon of television:

“I think it’s a wonderful thing, it flatters me a lot.” However, the actress passionately defends the character that gave her that title, Alexis Carrington (later Alexis Colby Dexter Rowan, because of their multiple marriages) in the popular television series “Dynasty”  between 1981 and 1989. “She was not a villain, no way,.  she never hurt anyone” she says.

Collins continues:… “You know the story of Alexis is that She married Blake Carrington when she was very young, at age 17. They had a son, but he was never with her, he was busy creating his oil empire she was left alone in a huge house, so she had an affair. he killed the guy and threw her out of his life, forbade him to see their children and not allowed to set foot in Denver, where the series is set, so she became embittered and decided to take revenge. Alexis was a business woman, very strong, ruthless, yes.. but her behavior was no different than many men. but she was not a villain. ”

“Dynasty” and its specific characters go down in history as symbols, not only the television of the 80s, but also its culture. She says: “I think the 80’s came during a time of great prosperity it was the era of Reagan & Thatcher, people made a lot of money and had a lot of hope, at least it seemed that we did not have the same level of violence and terrorism we have now. and I think that television reflected that optimism and showed very rich people living miserable lives, with much drama and tragedy. ”

Joan Collins made her mark in the ’80s, no doubt. Therefore, the Fashion Museum invited her to Chile to attend, on Thursday 31, She arrives on Tuesday for the launch of a book dedicated to glamor and fashion at that time. With the curatorship of fashion expert and museums Lydia Kamitsis, the book entitled precisely “The 80’s” includes the eye of renowned personalities such as Jean Paul Gaultier, Vivienne Westwood, John Galliano, Agatha Ruiz de la Prada, José Cardoch, Luciano own BRANCOLI and Collins, among others. “After  the 80’s, the fashion changed, no longer as it was known until then and suffered a resounding turnaround as an artistic phenomenon,” said Jorge Yarur, president of the Fashion Museum Foundation.

In this regard, Joan Collins offers her experience: “Fashion undoubtedly experienced a renaissance in the 80’s. Before ‘Dynasty’  we had programs like ‘Dallas’ or ‘Charlie’s Angels’ in which women wore so much simple, with silk skirts, pants, blouses, nothing particularly glamorous; no fur, veils or hats and in the early 80s, this was when I went to Paris shortly after starting the program, I realized that I had an oppurtunity to start a revolution in women’s clothing, one that left Yves Saint-Laurent and Pierre Balmain, who created a completely different silhouette, with a small waist, tight and big shoulders skirts, which was taken from the 40’s and the truth is that this new figure caught on like fire. and the women knew that fashion watching shows like ‘Dynasty’. we were the first to show that look and immediately  other programs like ‘Knots Landing’ and ‘Falcon Crest’, even ‘Dallas’ copied us . they began to show all big hair, big dresses, but I think it was the emphasis on the shoulder pads that created the look “.

-How Important was that look to create your character?

“Well, as an actress, I think the look is very important in a role and you must dress to represent your personality. Alexis was strong, powerful, immensely wealthy, and so was able to go to the best designers. Now because my character came to the series in the first episode of the second season. However, the end of the first season ended with Alexis coming to court to testify. for that they hired an actress, I never knew who she was, dressed in a white suit, hat, sunglasses and a veil, without showing her face. so I had to wear the same dress, it was remade for me, but it was the same. that has always given me a laugh, because they have talked a lot about ‘ the look of Joan ‘and I was just wearing something that had already been created when I put it on. ”

Had you seen the first season of the series before starting on it?

“No, not at all. In fact, that season was dealing mainly with the oil business Blake, the character played by John Forsythe, and only in the last episode talking about the ex-wife, Alexis. In fact, they did not know who to hire. they offered the role to Sophia Loren and Elizabeth Taylor, but they did not accept it. it was the producer, Aaron Spelling, with whom I had worked on ‘Fantasy Island’, who insisted that I be hired, but the network did not like the idea at first. ”

Recently, You participated in several episodes of the series E! “The Royals” program clearly influenced by ‘Dynasty’ …

“You think? I do not know, really, because the program speaks basically of the British royal family and transforms it into a fiction. But I think my character , the Grand Duchess Alexandra of Oxford, is probably what Alexis would have become 25 years later. She was very ambitious with a desire to get a place in the world and get as far as possible, so I think the idea of ​​becoming a noble … She would have loved! (laughs) “.

As today remakes and reboots are fashionable, was it not discussed the idea of ​​the return of ‘Dynasty’?

“Well, the truth is that for years, several actors who were cast have talked about it and it would be interesting to do a modern version, with the children, who would now be in their twenties and thirties, they would be the protagonists, but we would also be in it . However, the rights issue is complicated, it is a mystery. ”

In addition to her television work, you also have a long career in film.In fact, you came to Hollywood at the end of the “golden age”. How do you remember that time?

“It’s very difficult to be an actor now, too many people entering the business, it is very crowded. I was lucky, and the truth is that I was given everything very easy. In England I was hired by a firm called The Rank Organization and then Fox bought my contract and I came to Hollywood during the rule of the studies. at that time I was 20, it was like been 14 because I was very innocent and did not know much of the world. and the truth is that it was a very glamorous era. I remember every Saturday there was a fantastic party at peoples houses very powerful people, like Jack Warner, Darryl Zanuck and Billy Wilder, and saw people like Lana Turner, Clark Gable or Gary Cooper. But it was the end of that golden age, at the end of the 50s , but I was very lucky, I was paid and had constant work. I made ten films in the seven years I was under contract. ”

‘How do you feel about the sex symbol tag?

“Oh, well, I really do not think about it much.”

But you were one of the figures, Jane Fonda is another, which consolidated the idea in the 80’s that a woman over thirty years could be sexy. I imagine that you are aware of that …

“Yes, it is true, and that’s something I pride myself. When I was a young actress, often they told me that when I turned 28 or 30 years, my career would be over. That was the prevailing attitude of the actresses at that time, we started our careers when we were twenty or so and always found something very sexist. and it was not that I set out to do something about it, but I always seemed a ridiculous idea and knew that women could look good over the years. so I have written several books on the subject of beauty “.

Besides your goddaughter Cara Delevingne, you have nieces and even a granddaughter who want to be actresses. Do you support your decisions?

“Well, in fact, recently, I told them it’s very hard … Very, very, very hard. But it has always been very difficult. There is a lot of competition and the likelyhood of succeeding, even making a living, they are one in one million”.