Joan Collins in Chile: “If it’s fashion, would have

liked to live in the eighteenth century”

Joan Collins, the diva of the 80’s, was present at the Fashion Museum for the launch of the book “Cátalogo 80”. Actress icon of the “Dynasty” series on her visit, highlighted not only the fashion of the eighties, but confessed that she does not know the look of Chileans, but was impressed by the landscape of the city of Santiago that currently is not respected for it’a natural beauty”.

Arriving in a limousine, Joan Collins, showed the press that she has lost none of her style and elegeance.

“I’ care about my hair, makeup, clothes and accessories “she said laughing.

When she was asked about the changes she has seen over the years to the present, she did not hesitate to say that in the eighties everything was natural. “At that time the technology was not as advanced as today, women were conspicuous by their natural beauty. There was no Photoshop. ”

At the start of her film career Joan confessed to the press that at the beginning there was doubt of being an actress, she would have loved to been a costume designer because she always showed interest in fashion and trends of the time. “It was a difficult decision, she always had a penchant for changing the trends of beauty and fashion.

Fluorescent colors, pastels, stripes, polka dots, rhinestones, sequins and extravagant accessories are part of the fashion icons of the eighties. Nothing was left out and everything added. The breakdown, eccentricities and even provocation, are unforgettable characteristics of this era, reflected in the “Catalogue 80” at the Museum of Fashion.

This motivated Jorge Yarur, chairman of the Museum Foundation of Fashion, to make the heritage rescue of the vast collection currently preserved from this decade, through painstaking research presented today through the “Catalogue 80”. 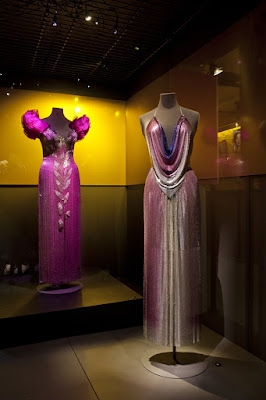 The result is a portrait of eclecticism of this decade and not only in the areas of clothing, but also the design. Through photographs of the extensive collection of the Museum of Fashion -catalogada as one of the best in the world, telling the story with interviews conducted with major Chilean and international personalities.

“For me, this catalog represents the culmination of five years of research in which I relived my youth and discovered the tremendous legacy of those years in technology, art and fashion,” said Jorge Yarur Bascuñán.

An important part of the texts and stories are renowned curator Lydia Kamitsis, internationally renowned specialist in the fashion world and museums, which details the graphic universe of the period, the game shapers. “The 80 is the last decade in which fashion trends proposed before the emergence of retail. Those years, until today, still will be a key reference and source of inspiration, “he said.

The look offered is from the point of view of Chile as the epicenters of fashion as Japan, London and Paris.

“I am very impressed with the depth of research” Catalogue 80 “and having had the opportunity to see the amazing collection of 80 that houses the Fashion Museum Chile, is something really spectacular,” concluded Joan Collins.