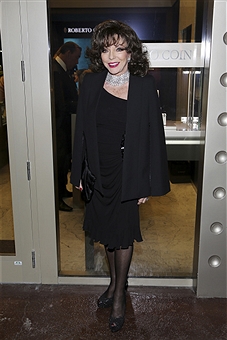 Ravishing. if you don’t know what it means, look it up. You may find a picture of Joan Collins next to the definition.

Dressed in an elegant, ruched black dress and strappy high heels, Collins, was the guest of honor Wednesday night for the grand opening of the Roberto Coin store in the Design District. Guests gathered in the courtyard outside, across from Michael’s Genuine Food & Drink.

Draped around the English actress’ neck was a diamond-encrusted bib necklace fit for royalty. Really. Prince Charles made the former Dynasty star a dame in March of last year.

“It’s a lovely piece, isn’t it?” said Collins as she smiled and posed for pictures along with her longtime friend, jewelry designer Roberto Coin, as well as Du Jour magazine publisher Jason Binn, who co-hosted the party.

“We are proud to have British royalty with us tonight,” said Binn, who then pointed to Collins’ husband, Percy Gibson, 32 years her junior. “God bless Percy for keeping up with her!”

It is tough to keep up with Collins. The showbiz veteran reports that besides working on a new book, she will embark on a 15-city tour of her one-woman show, Joan Collins Unscripted, throughout the U.K. in September.

The one thing that she would have changed if possible: our weather.

“It’s a bit chilly for Miami this time of year, isn’t it?” Collins said. “Though nothing is quite like England.”

Fans approached Collins for pictures, and she charmingly obliged. One guest, looking to be in her 50s, gushed, “I’m so happy to meet you. I’ve been watching you since I was a child.”

“My goodness,” she volleyed back with a laugh. “How old are you?!”