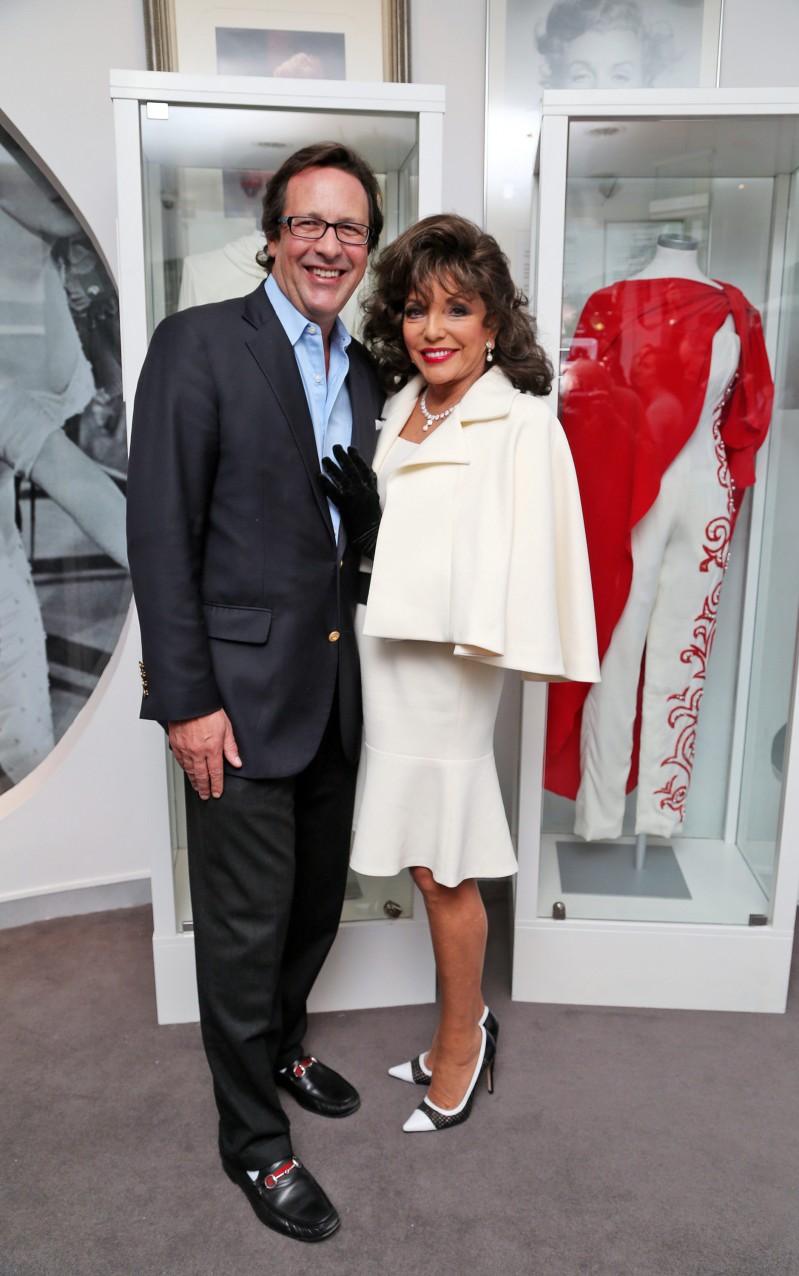 Grand dame of style Joan Collins was here for the opening of an exhibition of her clothes, and talked to our reporter about the Dynasty days, marriage number five, and the raw pain of losing Jackie

Joan Collins shows no trace of the curmudgeonly ageing Hollywood star, the fast-fading Norma Desmond in Billy Wilder’s Sunset Boulevard, when she says emphatically that there is little style or substance in today’s world of instant celebrity and untutored talent. She still exudes the epitome of style and sophistication she has for so long brought to the world stage; the kind of classy and sophisticated woman who has men – and indeed women – audibly holding their breath when she enters the room; who has them, the men at least, rushing to offer a chair or proffer a chilled glass of Groot Constantia Chardonnay or Dom Perignon White Gold. The kind of woman who brings out, indeed expects, the best in men who have not confined chivalry or good, old-fashioned seduction to the lexicon of yesteryear.

“This is my own design,” she gestures towards her jacket, “for the investiture last year. You know, darling, Prince Charles. Do you like it?” she asks, and touches the garment ever so slightly, brushing down the skirt, running a hand down the tan sheen of her right leg. “I hope they’re not going to ladder,” she says of her stockings, and then crosses her legs again. I am seduced, hankering back to Cole Porter and that tantalising glimpse of stocking in Anything Goes.

Dame Joan Collins hankers back to those days of old, though not in a self-detrimental way, to when stars were stars, and sophistication and style were the stuff of the Hollywood dream – the days a young-would-be English starlet set foot, back in 1955, on its back-lots and sound stages in search of that dream.

“My mother was always the glamorous, but domestic, goddess. She may well have been sweet and placid – the perfect wife I was determined not to be – but she was always wonderfully dressed. There were something like 11 or 12 aunts in my childhood and all wonderful-looking women, beautifully dressed. They were an aspiration as to how women should present themselves.

“The thing is, like the song, accentuate the positive and eliminate the negative. So, make use of and put emphasis on the good parts of your body. If you have great shoulders, wear pieces that accentuate them and cover up your legs, or vice versa,” she enthuses.

“I mean, do you know of any actress today who weighs more than eight stone? I cannot think of one. Where’s the room for the curves and the shapes? And what style is there in torn jeans? A lot of today’s stuff is designed for 16 to 20-year-olds, girls, not women, those of us with a woman’s figure,” opines the woman who counts among her favourite designers, Ralph Lauren (naturally), and Michael Kors – “he designs for real women”.

One is tempted to roll off a short list of contemporary actresses, but the still wonderfully alluring Collins has a point. Both she and I are with Cole Porter on this one.

The Newbridge Silverware Museum of Style Icons is an apt setting for our interview, an appropriate backdrop for La Collins, the grand dame of style, among the costumes, frocks and outfits of 20th century style icons: Audrey Hepburn, Marilyn Monroe, Princess Grace and Princess Diana, all immortalised here with their outfits in glass boxes, many of them creations from that hankered-after era of sass and sophistication.

The day we meet, Joan Collins brings some of that decadence and glamour to Newbridge as she officially unveils an exquisite collection representing her life and career.

The collection showcases an array of fashion and jewellery, among them a custom-made white fox and mink cape from the house of furrier Edward Lowell and, among the curiosities that catch my eye, a gold perfume bottle given to her as a present by Robert Wagner and the late Natalie Wood.

The collection, on a small tour which began in Julien’s Auction rooms in Beverley Hills, will be on display in the Newbridge museum that boasts one of the world’s largest and unique collections of style and cinema memorabilia, until Sunday, November 8, after which the lots will go for auction in December, back in Hollywood.

Chief among the collection are some of those wickedly wonderful pieces from the role she is best known for – Alexis Carrington in the long-running 1980s TV soap, Dynasty.

Alexis was unique perhaps among the TV heroines of the day for her belligerent badness: the captivating, conniving, calculating, commanding ex-wife of chief protagonist and tycoon Blake Carrington (John Forsythe) who, at the beginning of season two, returned to Denver, Colorado to reclaim her former husband and grown-up children and to take on new wife Krystle (Linda Evans) to the bitter end.

This was the show (it ran for nine years) – along with Dallas – that gave us power and greed, infidelity and overt sexuality, and set the gold standard in scratching, clawing, bitching and cat-fighting. Oh, it gave us the padded shoulders, beautiful gowns, chiffon and lace, sequins and silk.

“They at first wanted Alexis in tweed and pearls, the quintessential English woman. I mean, can you imagine?” Joan said. “That is not her, I told them. Alexis has travelled the world, is rich in her own right, knows who and what she wants and what she doesn’t. It’s not mothballs, darling…”

Aaron Spelling, the show’s creator, said of Collins: “She did not play Alexis Carrington. Fifty other actresses could have played the part but Joan Collins made Alexis. She was Alexis.”

To an Ireland of the 1980s, in another recession, before Sky and Netflix and Reality TV, the world of Dynasty seemed a world away, not least because of its portrayal of power, and its panache and pizzazz.

She laughs: “No, it was not like that at all. Not glamorous at all on set. We used to call it The Factory. We were just a bunch of actors doing a job, long hours and copious cups of Styrofoam coffee. But the dresses, the costumes, they were real. Not just stitched up. Wonderful. Glamorous. The work of the genius that was Nolan Miller – he had been an East European immigrant – who said he never wanted any of Dynasty’s females to wear the same outfit twice.

In this age now of reality TV and Kardashians and Real Housewives of Beverley Hills, could the Dynasty dynamic work for a digital, world- savvy audience?

“Oh, I think people will always want that style and fashion, something bigger than the everyday,” she says. “Every so often, there is talk of a comeback. But it is just talk. It will never happen. It was a different era.”

She pauses momentarily and then says: “There were great actors, some became friends I keep in touch with, especially with Diahann Carroll (Blake’s sister Dominique Deveraux) who lives in the same apartment block as me in LA.”

Talk of actors begs the question, who for her stands out today?

“Meryl Streep is still a wonderful actress, Cate Blanchett, but there are so many young actors today who have never learnt their skill properly, never done the time,” says the actress who came through the Royal Academy of Dramatic Art. Still a London girl at heart – “it’s the tea and the rain, darling,” she quips as she sips from a china cup.

Collins grew up during the Second World War. She made her stage debut in Ibsen’s A Doll’s House at the age of nine. After 18 months at Rada, she was signed to a contract by the Rank Organisation and appeared in a number of supporting roles in British films.

At the age of 22, Collins headed to Hollywood and landed roles as the wannabe sultry siren in several films, notably The Girl in the Red Velvet Swing (1955) and Rally Round the Flag, Boys! (1958), most now largely confined to the redundant reels of yesterday.

Throughout the 1960s and 1970s, her career fairly much marched to a slow pace, after she had appeared in a number of horror movies from the house of Hammer, Tales From The Crypt, with the wonderful Peter Cushing, and Fear In The Night, again with Cushing and Ralph Bates.

It was near the end of the decade, that she resurfaced to acclaim when she starred in two films based on best-selling novels by her younger sister Jackie Collins – The Stud (1978) and its sequel The Bitch (1979). “All very tame now, but they shocked back then,” she says, smiling at the memory of, I imagine, her flaunting around like a Playboy playmate with Oliver Tobias.

She also worked aside some of Hollywood’s most popular stars, including Elizabeth Taylor, Richard Burton, Bette Davis, Paul Newman, Gregory Peck, and Kirk Douglas. Her work in television included Starsky & Hutch, Mission Impossible, and The Man from UNCLE.

And, if it were the Dynasty character that finally paid off for Collins, giving her the role that has immortalised her, I wonder if she had any regrets about roles not offered or ones turned down?

She muses, “I turned down the role of Clara Dawes with Dean Stockwell in DH Lawrence’s Sons And Lovers. Mary Ure, the Scottish actress married to John Osborne, got the part and was nominated for an Oscar. I should have … but there were other commitments then, though what they were are lost on me now.”

Married for the fifth time for the past 13 years, she and her considerably younger husband Percy Gibson are frequent visitors to Ireland – “Isn’t the K Club just darling?”

She recalls coming to stay, as a young woman, in the Irish home of John Houston – “Angelica was just a child, precocious and wonderful” – and she was friends for years with Irish socialite Ned Ryan, he of Princess Margaret fame, and late of Tipperary, who became something of the modern Dick Whittington of London society and racing circles.

She smiles when I ask has she learnt anything from her previous marriages that she has brought to No. 5? “Oh dear. I mean sex and passion are all so important but with Percy – we met in San Francisco doing a play he was directing – he is also my confidant, my soulmate. We are very happy, and good for each other.”

And the secret of still looking so damn good ? “Lots of laughter, exercise, hard work and never get too thin or too fat,” she declares with a laugh, refusing to be defined by age. “One grows old, but one should never get old …”

I take this as an opportunity to ask about her thoughts on her sister and her recent death from cancer?

But she vehemently won’t go there. She brushes me away with a wave of her hand. “It’s still too raw, too painful,” she says, a tear threatening to play havoc with her mascara.

And for a brief moment there’s a tantalising glimpse of the woman beneath the style and sophistication, a woman older now with memories of another era, of her and a sibling, dancing away for a domestic goddess who rarely kissed or cuddled them but taught them to be strong and self-reliant in a world potentially fraught with instant celebrity and untutored talent.

A moment when there is no sign of Alexis Carrington.

Visitors to Newbridge can view the Joan Collins Collection from October 5 to November 8 from 9am-5pm daily. To find out more information, visit www.newbridgesilverware.com