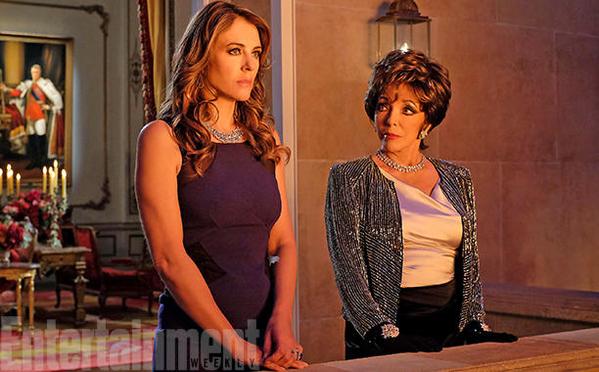 Joan Collins is back to playing the queen’s mother on season two of The Royals, and no one was happier to see the veteran actress return than her co-star Elizabeth Hurley, who plays her daughter Helena on the E! series. “We adore Joan Collins being on the set,” Hurley recently told InStyle. “We love it. We’re all excited when Dame Joan comes on, and she’s fabulous.”

Hurley and Collins were far from strangers when they were cast to play the manipulative mother-daughter duo on the show. “I’ve known her for years and years and years,” said Hurley, who had wanted the Dynasty star to play her mom on-screen for some time. “We’ve had two near misses in the past where we were going to play mother and daughter, and finally this came together,” she said. “It was a dream come true for both of us, because we play very well together—and her character is very interesting.”

Interesting doesn’t even begin to describe Collins’s character, the Grand Duchess Alexandra of Oxford. “At the end of season one, she was fabulous with the king—who was the prince at the time, Cyrus,” said Hurley. “She teases him, she’s saucy with him, and she’s wonderful to her grandchildren—they think she’s the bees knees and I’m a bore.”

But this season, expect family dynamics to shift. “By the end of season two, I think people will see her in a very different light,” Hurley said of Collins’s character. “At the beginning, she’s handing out diamonds, she’s being cheeky, and everything’s fabulous—but in the end, we find out she’s perhaps not as sweet as she’d like us to think she is.” A discovery that will shed some light on the relationship between Hurley’s and Collins’s characters. “Finally, we get to reveal a little bit more of that story,” said Hurley.

And we learn about the rest of the royals in the process. “Dark secrets come out,” said Hurley, adding that Collins’s character “reveals a lot.” Of course, no one could play the part in a more dramatic fashion than Collins, according to Hurley’s co-star, Jake Maskall. “She’s brilliant,” said Maskall, who plays King Cyrus on the show. “She’s the only person who could play the Duchess.” Why? Well, it’s simple. “She’s royalty herself,” said Maskall. “Very much so,” added Hurley.

To see the family drama unfold, tune into The Royals on Sundays at 10 p.m. ET on E!