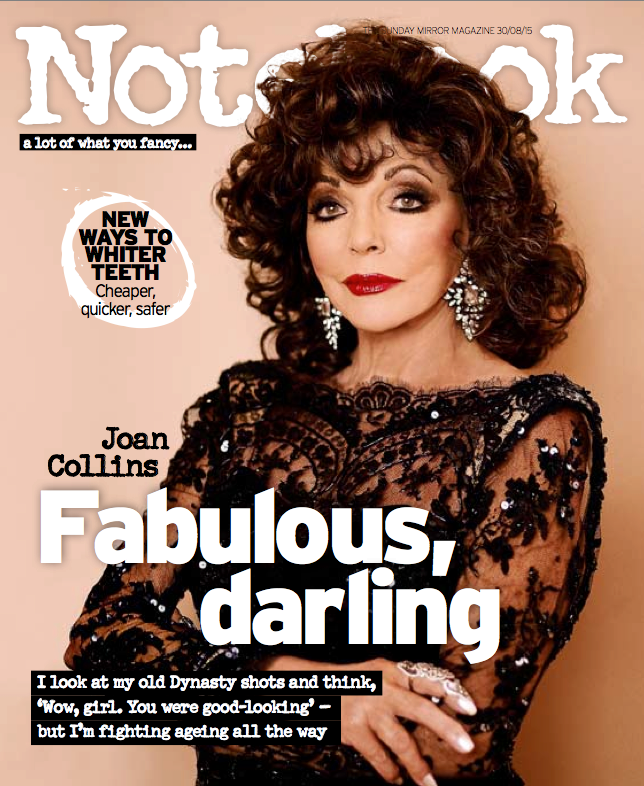 Joan Collins: “I look at my old Dynasty shots and think ‘Wow, girl’ – but I’m fighting ageing all the way”

Only thing is, we’re stuck in the hallway because Joan doesn’t like being scrutinised while she’s posing for the cameras.

She’s certainly a lady who knows how she likes things done. Her team has already explained we must address her as “Miss Collins” until she invites us onto first name terms, and warned that she “doesn’t do” handshakes.

Once the shoot has wrapped, though, and the woman herself has patted us onto the seat beside her, the lines between fiction and reality become clear.

Joan is a delight: as sharp and pointed as her beloved Jimmy Choos, yes, but also warm, open and wickedly funny. It’s all we can do to stop ourselves falling to the floor, bowing “We. Are. Not. Worthy.”

And since you’re wondering (we know you are because we were), in the flesh La Collins looks… awesome. She’s just got THOSE cheekbones basically. You don’t need surgery when you’ve got the ultimate coathanger for your face.

A beauty regime she calls “absolutely scrupulous” doesn’t hurt either. Speaking of which, Joan’s here modelling her aptly named Timeless Beauty make-up and skin range and there’s no mistaking her passion for it.

When she spots we’re wearing her gold eyeshadow and Lady Joan nail lacquer,

In fact, as we say our goodbyes, we’re gobsmacked and honoured when she – OH GOD! – shakes our hand. Must have been the nail polish that swung it.

You have amazing skin, what’s your secret?

I never put my face in the sun. I see all the time how staggeringly bad that is. I love being in the sun though. I’ve decided I don’t care about it on my body but I do on my face.

So I’m tanned everywhere except my face which is white as a sheet. I put on several coats of my First Base foundation to match my body. Then I wear SPF, moisturiser, sunglasses and a hat.

You look young, do you feel young too?

I really do. I have girlfriends who say “I’ve fallen, I’ve put my shoulder out” and [looks around room] now where is the wood? Ah yes, well, touch wood I’ve not had that. I do believe a lot of it has to do with the fact my mother made us eat healthily. We had things like cod liver oil and had to eat all our greens.

I started exercising from the age of three and I haven’t stopped moving since. I feel no different inside from when I was 40. Maybe one day I’ll wake up and feel different but I don’t. I don’t want to.

When do you think you looked your best?

During Dynasty. I look at some of those shots and think, Wow, girl. You were good-looking.

That’s when you posed for Playboy isn’t it?

What’s your attitude towards ageing – are we too obsessed about staying young?

People are only obsessed with women ageing. I have no idea how old David Cameron is because I never see his age in the paper. You ask anybody how old I am and they will be able to tell you because every time they print my name they print a number after it. A number I never say.

Ageing is inevitable but you can fight it all the way. I don’t want to fight it with Botox, fillers or facelifts, they make people look silly, I fight it by taking scrupulous care of my skin.

What do you use?

Only my own brand. It’s my ethos: pure, not tested on animals. From my time in the business I know the best ingredients to include.

How do you want a woman to feel when she wears your beauty range?

Much more attractive. It’s all about making the best of yourself. When women say to me, “But we don’t have time” I say [scornful], “Hello there? Are you watching Jeremy Kyle in the morning instead of trying something to make your face look better?” It is easy.

As the ultimate 80s style icon, how do you feel about the 80s being a big trend again?

Alexis looked fabulous… the 80s were incredibly stylish. Maybe sometimes there was a little too much hair and [whispers] maybe a few too many shoulder pads, but basically it was wonderful. There is no style now.

How would you describe your own style?

I don’t go designer shopping, it’s a waste of money. Couture clothes are a complete, well, I won’t say disgrace, but to spend £20,000 on a dress is obscene. I know what I like and I have a lot of things made because they don’t exist in the shops.

I have a fabulous dressmaker. In fact I gave her details to my great friend Cilla after she said [adopts a Liverpudlian accent], “I like your clothes, chuck”. I’ll miss her.

What’s the biggest misconception people have about you?

That I’m like Alexis. I don’t think I am. I might have parts of her, I don’t suffer fools gladly.

Oh, I can be! Actually, I wouldn’t say it’s about being scary. You wouldn’t say that about a man who put his foot down and said, “I don’t like the way this is done.” If you’re a woman saying that, they will stick the adjective ‘scary’, ‘bitchy’, or ‘diva’ in front of your name, unfortunately.

Are you a feminist?

Absolutely. To me, feminism means a woman can do anything a man can do, except physically and that is where I draw the line. I am not about to change a light bulb. I do put the rubbish outside sometimes, though. Not taking the bins out, no. But the wastepaper baskets, yes.

You’ve been divorced four times and are now happily married to Percy. What’s your secret?

It has to be about friendship. With the others I went in on the crest of a wild attraction. But then, you know, my husband is very attractive too. You need both.

A happy marriage is about being best friends, being able to speak your mind. And having separate bathrooms. I know most people can’t afford separate bathrooms, I am saying that slightly ironically. But in an ideal world… Don’t you HATE having to put the toilet seat back down?

You need a self-closing seat…

(Astonished) A self-closing seat? Really? I’ve never seen one of those. I’ve had the same toilet for the past 20 years. Well next time I can afford to redo my bathroom I will get a self-closing toilet seat.

I’m into the importance of eating properly so I eat a lot of avocado, raw spinach, broccoli. My exercise regime for the past two months has been swimming at my home in the South of France.

I try to do 30 laps a day, and 15 minutes of floor work three times a week. All things to do with toning up. I’ve done quite a good job on my legs but my middle part has fallen to bits thanks to my Mediterranean diet.

Isn’t that meant to be healthy?

Well not our Mediterranean diet which involves a bottle of rosé wine every night! Who can say no to it? Our chef brings out croissants every morning. I say “PLEASE, I don’t want croissants.” But oh, how can you resist a croissant when you’re in France?

Dynasty took you to a new level of fame. When did you know you’d become
an icon?

When I saw the headline in The Mirror: Sophisticated Lady Joan set to beat Larry Hagman as JR (in Dallas).

How do the pressures of finding fame today compare with when you were starting out?

How dare somebody say, “I just want to be famous”? You have to WORK! I never wanted to be famous. I still don’t care if I’m famous or not. I just wanted to be a good actress and support myself as an actress. Which I have done for a long, long time.

Your career has spanned over 50 years, what drives you on?

I need to work, darling. I have three children and three grandchildren to support. I have a lifestyle I figure I’ve earned, I don’t get royalties from Dynasty, so I continue to work.

Plus, I love it. I have my beauty line and I have a book coming out called The St Tropez Lonely Hearts Club.

Does it involve a lot of rosé?

[Laughs uproariously] Why yes! And a lot of cheating and murders. It sounds fabulous, doesn’t it? And it is! It’s a slice of St Tropez life. But not my St Tropez life. Apart from the rosé.