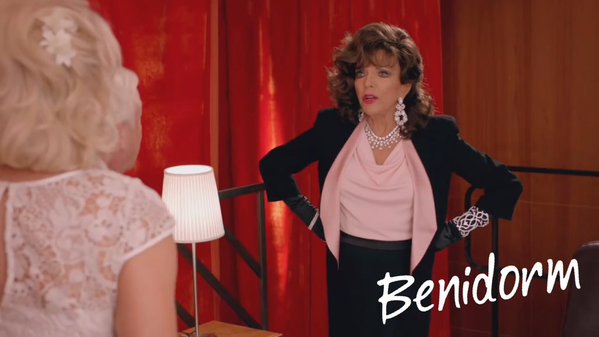 Benidorm’s Sherrie Hewson: ‘I’m not sure Joyce will ever find love while she’s in charge at the Solana’

Solana manageress Joyce Temple-Savage has a new admirer in Monday’s Benidorm (ITV, 9pm). The Spanish resort’s very dodgy businessman Monty makes a few attempts to woo her, even performing a song at Neptune’s.

What’s On TV met Sherrie Hewson, who plays the unlucky-in-love hotel boss, on the Spanish set where she revealed her delight at once again working with Only Fools & Horses star John Challis, who’s back as Monty.

“Joyce thinks Monty is lovely, but then he seems to prove to her that he’s not – she thinks there’s another character he rather likes! Sadly it all goes wrong. I’m not sure Joyce will ever find love while she’s still in charge at the Solana.

“I love working with John Challis. He’s been in Benidorm a few times now. We get on so well.”

At the end of the current series, Sherrie will be acting opposite another retuning guest star. Hollywood actress and Dynasty star Joan Collins is back in Benidorm as Joyce’s scary boss, Solana CEO Crystal Hennessy-Vass, who’ll be attending a glitzy awards ceremony held at her hotel.

“Crystal is always quite formidable with Joyce because she’s always trying to sack her or treating her really badly. She looks down on Joyce. I love it and I have great scenes with Joan. She’s so lovely to work with, she’s very funny. It’s like The Beatles have arrived in Benidorm when she’s in the resort. Fans are queuing down the road for her.”

Sherrie has a few ideas about why Benidorm attracts the best guest stars.

“Everybody is desperate to be in it because it’s simply the best sitcom on television. There are very poignant moments mixed with extremely funny scenes, which is a terrific mix. Everybody always says to me: ‘Is there any way you could suggest…’ Yes every actor says to me they want to be in two shows in this country and that’s Benidorm and Downton Abbey. Everybody loves our show. It’s a cult show, and it will be remembered for ever. It’s definitely the best of its type on television.”

Benidorm continues on ITV every Monday at 9pm