Joan has lent her voice to an exciting new children’s educational project, developed with her good friend Roger Moore on behalf of UNICEF. ‘Giving Tales’ is a series of illustrated versions of popular tales read by Joan along with Roger and others including Stephen Fry and Ewan McGregor. The first four tales are now available to download on…


‘The Princess & The Pea’ read by Sir Roger Moore KBE 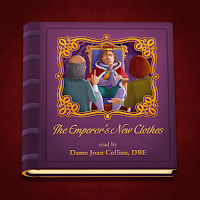 ‘Giving Tales’ will be donating 30% of their revenue to UNICEF to help children around the world..