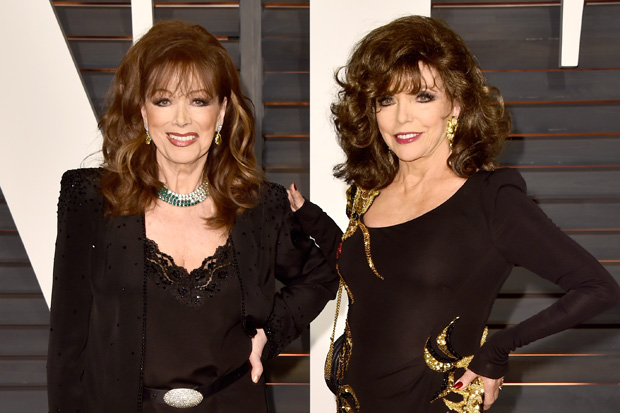 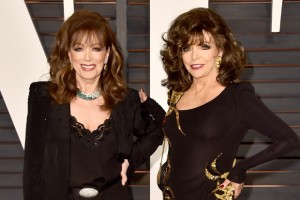 I had only experienced great loss when my mother died. It was desperately harrowing, but not as harrowing as the news that my sister Jackie had passed away. My mother had suffered a long lingering illness but Jackie only told me about her cancer two weeks before she died. It was a shattering, heart-breaking blow that I still haven’t yet totally assimilated and I don’t know if I ever will really get over it. I expect that one learns to live with loss but she remains as vivid in my heart and my mind as if she were still alive. Jackie was a special woman, not because she was my sister but because of her indomitable spirit, amazing energy, generosity, kindness and warmth. To have written five books after being diagnosed with cancer seven and a half years ago is a major achievement, not to mention the travels to London last year to receive her well-deserved OBE and visiting in March of this year to celebrate my DBE. Jackie was not just a star, she was an entire galaxy.

I didn’t think I would be able to continue with the preparations that I had been making for my husband’s fiftieth surprise birthday in October, but I threw myself into the secrecy that was needed to insure that no one leaked the news to him. It was as clandestine as if I were having an affair, but it was all worth it when Percy arrived at the private room at Quaglino’s to be greeted by 35 family and guests yelling “Surprise”!

Ah, the magic of Twitter! After Percy struggled for two weeks to get our Sky cable box to work, I posted a little tweet complaining about their terrible service. Lo and behold, within twelve hours, two young techno-geeks arrived and dashing from roof to flat carrying all manner of equipment had all the sets working perfectly within hours. Pity they couldn’t do the same thing with our ancient boiler, which, since it’s shared by the four flats in our late nineteenth century building, will cost thousands and thousands to replace.

Holed up in bed with the godmother of all colds, surrounded by balled up tissues and piles of Saturday’s and Sunday’s newspapers, I tried not to feel too sorry for missing a couple of fun dinner parties. Percy contracted the same major cold at the same time, so we were able to sympathize with each other while rubbing each other’s backs with Vicks and dosing each other with copious amounts of honey-and-lemon drinks and Echinacea pastilles. But whatever one does, the bloody cold is in control so you just have to suck it up and surf the TV only to discover endless re-runs of Bruce Willis in multiple Diehard’s and Godfather’s 1, 2, 3, or however many there are.

There are thousands of wonderful movies from the 40’s throughout to the 70’s and 80’s but all the networks seem to offer are the same recent movies over and over again. Occasionally there will be a gem, like Billy Wilder’s Double Indemnity with the great Barbara Stanwyck. But that was aired at 3am and a large technicolored bloke in a red shirt took up a third of the black and white screen making hand signals and doing funny faces, which I finally realized was for the hearing impaired but which distracted totally from the suspense. I couldn’t get the image of the classic Saturday Night Live sketch, where the broadcaster screams out “AND NOW HERE’S THE NEWS FOR THE HEARING IMPAIRED!!”, out of my mind. I’m amazed and horrified that so many people under the age of forty haven’t heard of most of the great movies, let alone the great movie stars, of the golden age of cinema. Mention Bette Davis, Marlon Brando, Gene Kelly or Fred Astaire and you get blank looks. These are the same blank looks that cross my face when I skim through celebrity magazines crammed with faces I don’t recognize. But I’m beginning to recognize some of them now since watching Strictly Come Dancing. Now that’s really entertainment and deserves the millions of viewers who regularly watch it.

I travelled to the glamorous Grand Hotel du Cap in Antibes to shoot a cameo in the movie of Absolutely Fabulous. Sworn to deepest, darkest secrecy by the publicity department, my lips are sealed about the plot. In fact, I’d probably face a spell in the Tower if the script, with my name bannered across every page, fell into dastardly hands and was flogged on eBay. However, I can say Mesdames Saunders and Lumley looked extremely fetching in their gloriously over-decorated caftans, adorned with plenty of gold bling. We shot in the pool area of the hotel to which we had to travel down by funicular a steep and rocky incline. I’m somewhat nervous about funiculars. They seem terribly rackety and dangerous, but I arrived at the pool area safely, played my scene, then retired to a shady spot for lunch and to observe the two fabulous actresses do their very funny scene. However when I had to leave to catch a plane back to London the AD ruefully informed me that the funicular had broken down.

They brought me lunch. I had mentioned I was allergic to shellfish, but as I pushed the lettuce I spotted several tiny shrimp nesting between the leaves. Luckily, the funicular had just started working. Had I partaken of one little shrimp, I could have gone into anaphylactic shock.

Remarkably, my new novel takes place in the South of France, where not only does a funicular break down but it bursts into flames and not only are some guests at a party served tainted shellfish but one woman actually dies from eating it. So is this a case of life imitating art or vice-versa? After all, I wrote it first!

Read the original article on the Spectator website here