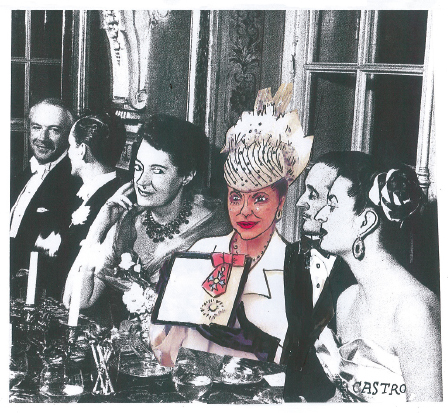 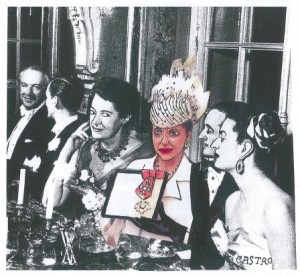 The day of my investiture at Buckingham Palace dawned bringing freezing rain and fierce winds lashing at the windows as I ruefully regarded the outfit I had painstakingly planned for months – a lightweight, cream wool suit. Being British, a little damp didn’t bother me, so I didn’t care if I’d be shivering when Prince Charles pinned the illustrious medal on my cape. It was rather the fate of “the hat” that worried me.

Designed by milliner to the stars and royals Philip Treacy, it was a frothy creation of white grosgrain, chiffon flowers and delicate point d’esprit veiling, and I was concerned about the wind whipping it off. Luckily I had pulled my hair back in a ponytail so I didn’t need to worry about the “bad hair day” so beloved by the paparazzi.

My best friend Judy Bryer, who had jetted in from Las Vegas for the event and the parties that would follow, soothingly reassured me, “Philip has put enough construction inside so that even a gale wouldn’t shift it.”

After much primping and prepping, my husband Percy and my two oldest children Tara and Sacha drove off to the Palace. We averted another potential disaster when, at the gates, Percy confessed to having left his photo ID behind.

“Will you vouch for this gentleman?” the helmeted bobby inquired.

Tara chimed in, “And she’s going to be made a Dame today!”

The policeman smiled politely, stared at me to make absolutely sure I was not an Alison Jackson lookalike and then ushered our driver through into the outer courtyard.

Once inside we were separated and I was shown into a vast hall with several other recipients. There we were instructed in protocol and the women were made to practice our curtseys. Although the future Knights weren’t let off so easily, as they had to practice kneeling on a small velvet stool and then rise again, amidst much creaking of joints.

Walking through the hallowed halls of the glorious Royal quarters on the way to the Investiture Hall, I couldn’t help but be impressed, but I couldn’t help feeling slightly giddy as my moment approached. “Walk, stop, walk, stop, turn, curtsey, walk, stop, curtsey, stand, wait, curtsey, walk (backward), stop, curtsey, turn, walk” I kept repeating to myself when suddenly a hand propelled me forward and I faced Prince Charles, who flashed a charming smile and said, “And about time, too!” My nerves evaporated.

Although I’d already received an OBE, for services to Drama, my Damehood for services to charity meant so much to me. As patron of the Shooting Star/Chase Hospice for children with terminal illness, I know how much these families depend on us to help them provide the best care for their child. They receive little or no support from the government when their child is sent home after the initial hospital care and they are left to cope alone if not for the valiant efforts of the hospices.

After the ceremony we repaired to the private room at the Wolseley where I was greeted by my dearest sister Jackie, who had also flown in for the occasion, my brother Bill, his wife Hazel and my grandchildren Ava and Weston along with several friends from NY, LA and Texas.

Most of them (nix, all of them except for my grandkids) were a touch hung over as the previous evening my great friends Joyce & Simon Reuben had thrown a spectacular cocktail soiree at LouLou’s, courtesy of Robin Birley. The club had created a special drink, called the Joan Collins – a lavender Tom Collins – as well as scrumptious canapés. I danced alongside my wonderful guests, ranging in age from 13 to 84 (my 13 year old nephew Austin was the best.) The DJ was hot and we only quit when the regulars started arriving and crashed the party!

On the night of my investiture, we hosted a big black tie party at Claridges for one hundred of my family and close friends. I was panicked about invitees not showing up as I’d been working on the perfect placement for each table for months, and I dislike seeing empty seats, not to mention having to sit next to one. I needn’t have worried – everyone showed up beautifully dressed and on time too, which almost never happens.

We named the tables after our favourite places – NY, Saint Tropez, Hollywood, etc. but I curbed my temptation to call the top table “Siberia” and settled on London. It was simply the most fabulous feeling to see, in the gorgeous setting of Claridges, the peach-clothed tables, topped with the most exquisite peach and white rose and candle arrangements, populated by so many people I cared about, showing how much they cared for me.

The speeches were warm and witty and after many wonderful tributes, Percy stood up wearing a sailors hat emblazoned with ‘HMS Dame Joan’ and started singing the opening verse of “There is Nothing like a Dame”. As singing is not his forte, I steeled myself to be thoroughly embarrassed. Again I needn’t have worried – he had secretly rehearsed a musical extravaganza (well, that may be a reach) with Christopher Biggins taking the second verse, then leading me into the middle of the dance floor. They sat me on a Bergere “throne” while Theo Fennell, Charles Delevingne, Billy Differ, Jack Rich and Nickolas Grace took on various parts with gusto and all joined in the chorus together.

I was beyond thrilled and moved. Without a doubt this was the best night of my life and judging from the torrent of flowers, letters, email and gifts that poured in the following morning, many of my guests felt the same.

The following day, my sister Jackie gave the “out-of-towners” and us a “post-mortem” lunch, and that evening our future mayoral hopeful Iva Massow threw a grand kitchen supper in his house where, amongst others, Tracey Emin, Alison Jackson and Tom Hollander enjoyed Ivan’s plethora of erotic art. A final lunch on Saturday hosted by Jack Rich, then tea at home with the core group before everyone flew off, exhausted leaving Percy and I to rest and talk endlessly about this once in a lifetime occasion. Waking up the next morning I felt very Jack Lemmon-ish in “Some Like it Hot”, as I recited “I’m a Dame! I’m a Dame? I’m a Dame!!”