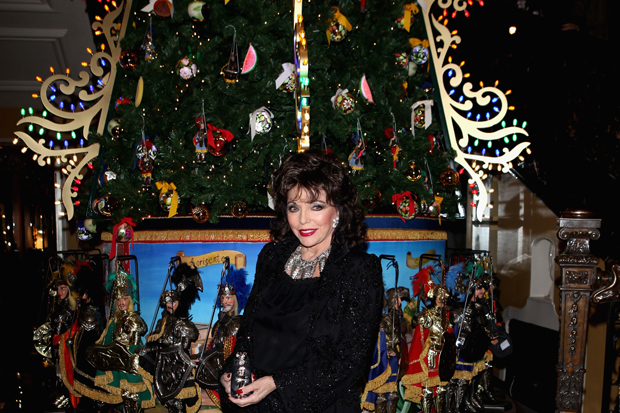 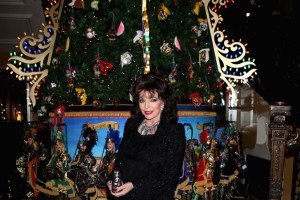 Every year Christmas comes earlier and earlier in America. Cards, baubles and imitation trees were being sold in the big department stores in August, and the street decorations have been up in Beverly Hills since well before Halloween. Americans become extremely excited about Halloween, which falls on October 31 and woe betide the intrepid driver who ventures out with their “vehicle” into certain streets that day.

Santa Monica Boulevard, which runs all the way from the Pacific Ocean to the skyscrapers of downtown LA, is a no-go area from noon onwards. Major chunks of the entire boulevard are closed so that half a million grotesquely (or gorgeously) costumed celebrants can show themselves off sauntering down the wide boulevard. Infants and children are welcome, the youngest ones usually done up as baby chicks or bunnies. But some adults go beyond the boundary of what is acceptable as was evidenced by the inordinately fat man dressed as “Baby Jane”, only this one with a crop top and pink miniskirt that displayed an offensive excess of hairy back and avoirdupois. It was truly the stuff of nightmares.

Shops sell cards for every occasion, a practice that also has been imitated now here in England. Immediately after Halloween the shelves are full of orange Thanksgiving cards and favours like napkins and paper plates and they compete on crammed shelves with the “Christmassy” wares in all their tinselly red and gold glory. I’m a sucker for Christmas however, and each year when it’s over I sigh deeply and say “never again” but come July my resolution is gone and I’m eagerly plotting the our Christmas card, which is then followed shortly by thinking about the celebrations.

I long ago gave up the idea of a real Christmas tree and now I have a magnificent fake fir (however naff that sounds) because by Boxing day my tree is still standing proud and tall in all it’s glory and hasn’t shed it’s dead bits all over the Christmas presents, invariably getting stuck to your feet or slippers which then get carted all around your house and show up in the most unlikely of places: your pillow, your makeup, your morning coffee – unless of course one has dedicated staff to sweep them away. My tree is totally dripping with glittering decorations that I have been making and collecting since my children were little. I have so many now that the tree is practically hidden – so it doesn’t really matter if it’s real, actually.

Since I believe Christmas is for kids (want some of mine?) I become Lady Bountiful to my three grandchildren. I have always loved wrapping masses of gifts and loading them beneath the tree but today since it’s computers and all manner of electronic devices that entrance the young ‘uns it’s much more difficult to find presents they will relish.

Ah, how well I remember those austerity days when all we got for Christmas was an orange or tangerine in a small stocking, a few games and a book. I’m constantly amazed at how much money people spend on their kids at Christmas, some whom can ill afford it. Who says today’s generation is spoiled?

Like many British actors and actresses I fly to the US two or three times a year, with my new and nifty global entry card. I have rarely if ever had any problems at immigration, until last month. Because I liberally apply moisturizer on long trips, my hands were full of lotion so my fingers didn’t make a strong enough impression on the fingerprint scanner. My immigration form came out of the printer with a large and very ominous X on it. This alarmed the official who now had to run me through the interview manually so he decided to leave me standing next to his desk while he waved forward and collected the forms of those who’s fingerprints presumably met the high standards which I failed. After an interminable parade of obvious stares and hidden snickers from the successful entrants, he made me take off my hat and glasses and generally made me feel like a Grade A Criminal caught at the border after trying to immigrate into the US illegally. He cross-questioned me ruthlessly – “What do you do?” “Why are you here?” Several other officers were called over to discuss me; my passport was inspected thoroughly and scanned endlessly. That was a lot of fun after a ten-hour trip from Heathrow, and all because apparently I had slippery fingers.

There has been a shocked outcry among the politically correct brigade because of a sign put in a Christmas display at a popular US department store.

“Dear Santa – For Christmas I want a fat bank account and a slim body. Please don’t mix up the two like you did last year,” it read. Fairly inoffensive and many people thought quite amusing until of course it fell into the hands of the overly-sensitive social media bullies demanding the sign be removed, apologies be issued and probably someone to be beheaded at the town square. The sign was duly removed

When the story broke in the evening news on TV, it was immediately followed by several commercials – the first for MacDonald’s latest burger featuring three buns, cheese, bacon, onions, special sauce and massive amounts of meat. The next commercial was for a Los Angeles based weight loss center that specialized “in gastric bands and gastric bypasses” heralded by a beaming woman about a size ten who claimed happily that she had lost 250 pounds with this surgery and is now oozing with confidence. After this commercial came carefree skinny kids eating cheerios breakfast cereal, which as far as I know consist of wheat starch, sugar, salt and fat to accompany the benefits of whole grain oats. Perhaps Mr. Osborne could finally balance the budget by exporting a surplus of irony recognition, which seems to be in much need these days.